At heart I am a visual culture purist. I say this to forewarn you about my comments regarding the rood screen and pulpit of St Edmund’s Church in Southwold.

St Edmund’s is a beautiful medieval church built in the Perpendicular style. It’s full name is ‘The Church of St Edmund, King and Martyr’. The building we see today (suggested date 1413 in the church’s guide, but circa 1430 in both Pevsner and Mortlock accounts) was built on the site of an earlier thirteen-century church, a smaller building that had been destroyed by fire. According to the church guide during 1758 the foundations of that original building were located underneath part of the present church. 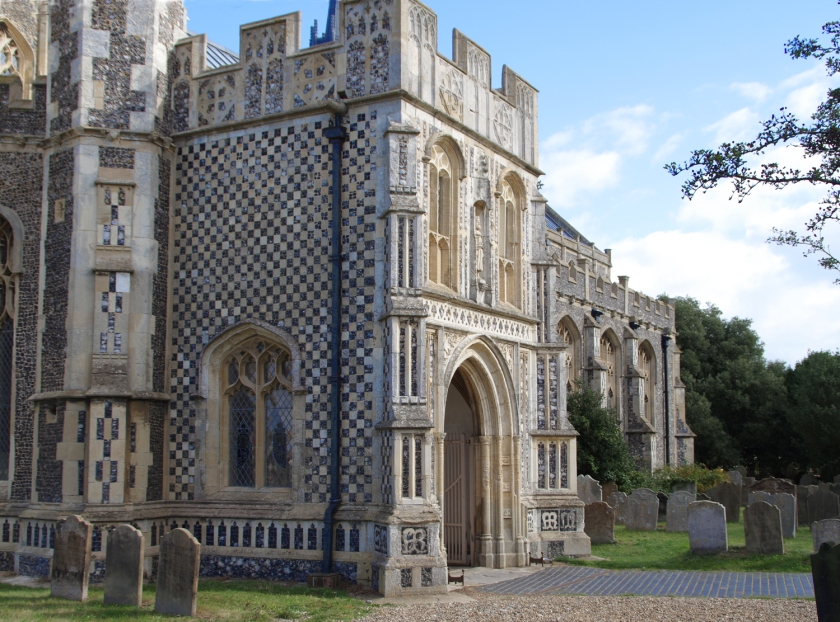 The straight lines of the Perpendicular style have been emphasised at St Edmund’s by the luxury flushwork of flint and stone. The linear quality of the building is doubly emphasised by the striking effect of an inlaid chessboard decoration on the west tower that is repeated on the exterior walls of the south porch.

South porch with niche that would originally have held a statue of the Virgin Mary. 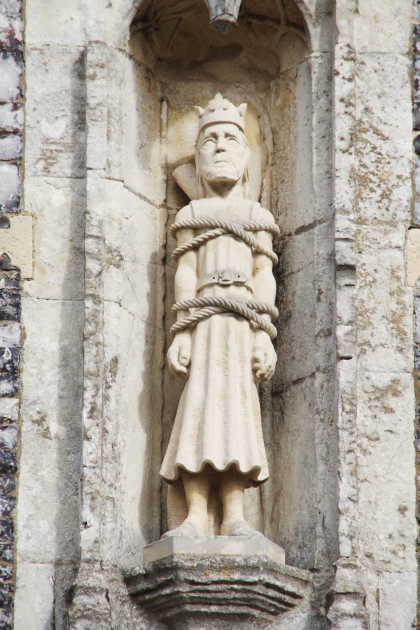 From the appearance of the grand, ornate exterior it is evident that St Edmund’s was built at a time when the parish of Southwold and its environs had generous wealthy donors. This is confirmed by the quality of the surviving medieval interior furnishings that include the rood screen, the pulpit and the font.

Of course, the splendid, painted and gilded rood screen alone is worth a visit to the church, but there is also a fine pre-Reformation pulpit and a beautifully decorated and adorned hammerbeam ceiling together with the original, though defaced font.

Now here is the issue. Between its glorious fifteenth-century heyday and today, St Edmund’s, along with many East Anglian medieval churches, has had some turbulent, destructive times, and equally, some impoverished, neglected and generally detrimental times. The visit of William Dowsing and the iconoclasts in 1643 brought the first and substantial destructive episode which included the defacing of the font. 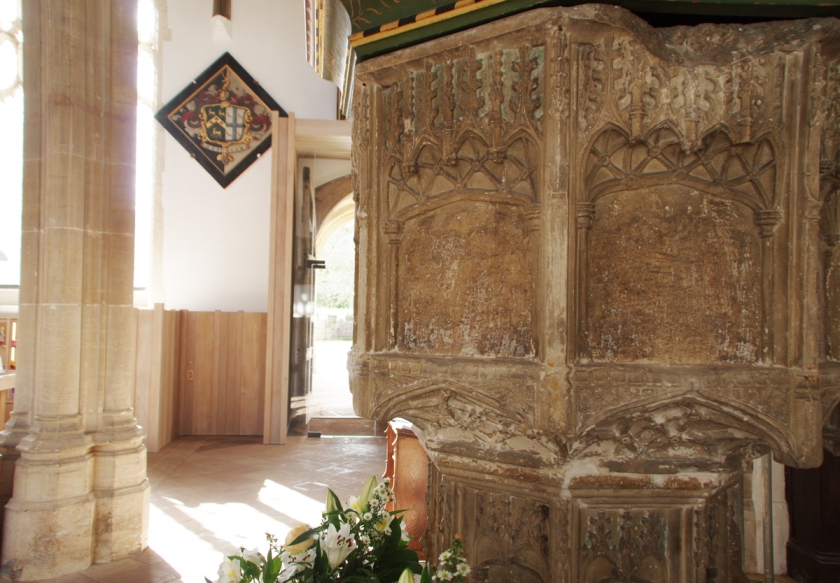 After this deliberate, seventeenth-century image smashing came the long period of straightened times for Church of England buildings as the eighteenth century saw the rise of the Nonconformists and the subsequent fall in C of E congregation numbers. A neglected St Edmund’s functioned with a series of temporary curates as the chancel roof and wood of the east window slowly rotted away. 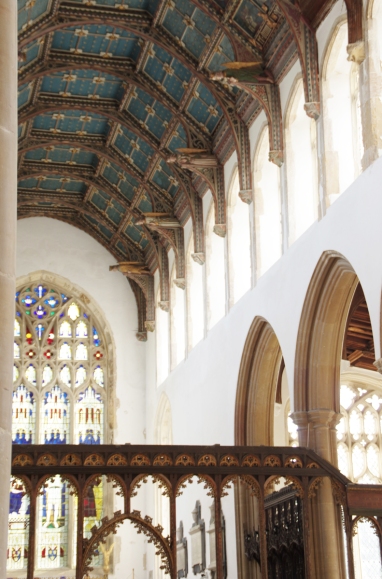 However, with the rise of the Evangelical movement across the course of the nineteenth century it was all change again. A widening interest in re-examining the medieval past combined with the Victorian’s obsession for progress, resulted in large funds being provided for extensive renovation schemes at St Edmund’s.

The attractively painted ceiling of the hammerbeam roof adorned with painted angels we see today is one such renovation scheme. The replacement ceiling is a fine example of nineteenth-century carpentry and decorative painting skills as well as an insight into how a previous generation reinterpreted our shared medieval past. The Victorians aimed for reconstructing a perfectly finished past whilst our twenty-first-century sensibility is all about the delicately preserved, authentic original however dilapidated and tatty it looks.

Apparently, the colourful blue and painted details are very near to sketched records of the original medieval ceiling, but how fair a facsimile it is difficult to judge. That situation is brought acutely into focus when we turn to consider the ‘restoration’ of the medieval pulpit during the 1920s.

Along with providing designs for the reredos, the lectern and the font cover, an ‘inspired young church architect from Oxford’, F E Howard (1888-1934), oversaw the restoration and painting of the pulpit. Sadly, the once elegant original medieval trumpet-stemmed pulpit is almost obliterated beneath thick layers of overdone paintwork and gilding.

Curiously, the writer of the church’s own guidebook gives special credit to F E Howard for making St Edmund’s interior the delight it is today. However, even the guide’s sympathetic author informs us that any desires by Howard to renovate the rood screen were not permitted.

Personally, I am very, very pleased he was stopped.

I have nothing against Victorian art and it is as much part of the history and culture of this church as the medieval art. Nevertheless from the our twenty-first-century viewpoint the Victorians’ well-meaning yet heavy-handed painting and renovations can border on vandalism. The repainting of the damaged saints’ faces by Sir George Richmond in 1874 are bad enough, but just think what Howard would have done in the 1920s to all that delicate gilding on the rood screen given half a chance. 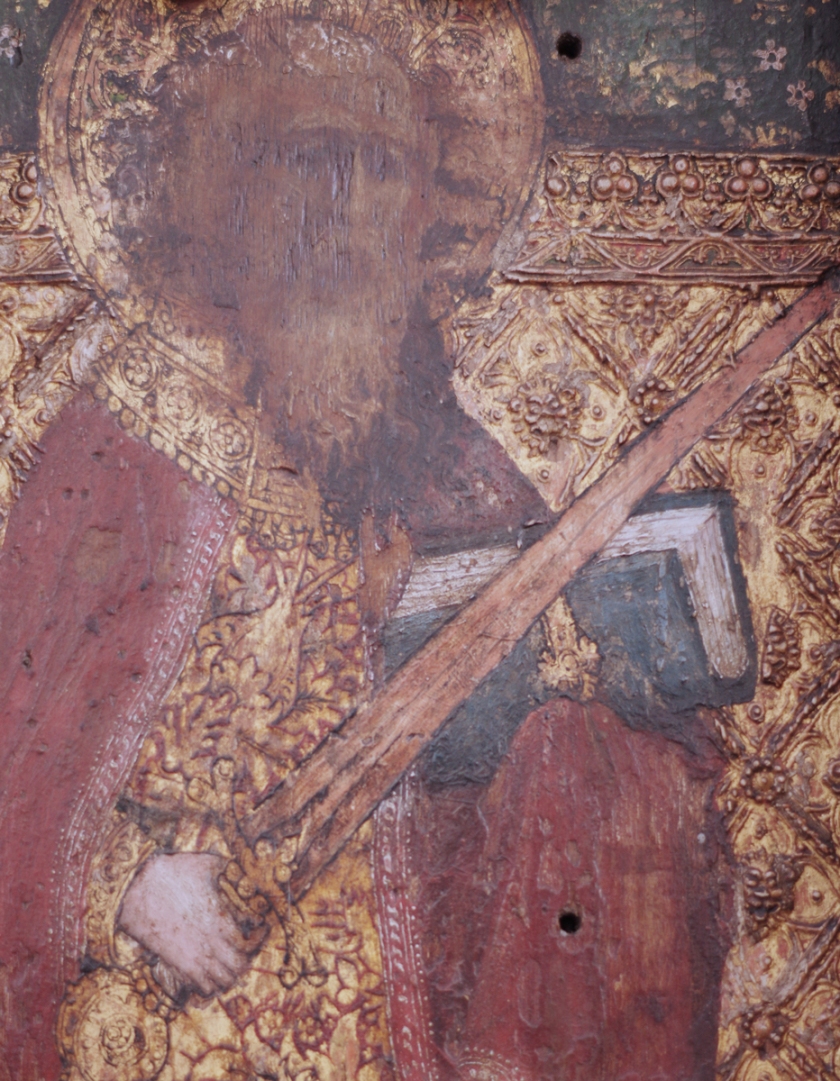 As I mentioned at the beginning I am a visual culture purist and as such I appreciate seeing what is left of our medieval culture when it is gently conserved, but I do realise that a little active conservation is necessary. Of course, what we have left is still only an approximation of the reality of the past. Today’s impression for a visitor to St Edmund’s is nothing like the spectacle and mystery experienced by a medieval parishioner or even a Victorian church goer as all the medieval stained glass was blown from the windows by a bomb in 1943 during the Second World War.