I can’t always put my finger on why I choose certain colours for a scarf, but after painting three muted scarves in the Edlyn series, I felt the need for something a touch more brash.

After drawing out the basic Edlyn design it was time to start selecting the colours.

The colours were definitely not from a medieval palette, but they were still too pale and pastel and needed a bit more zing somewhere.

Yes, I liked the fuchsia pink and the chartreuse green and the whole design was better pulled together by adding plenty of the chartreuse to the diagonal swag.

And, mmm, yes, adding more of the chartreuse worked, but to finish off the scarf unquestionably required just a little more fuchsia. 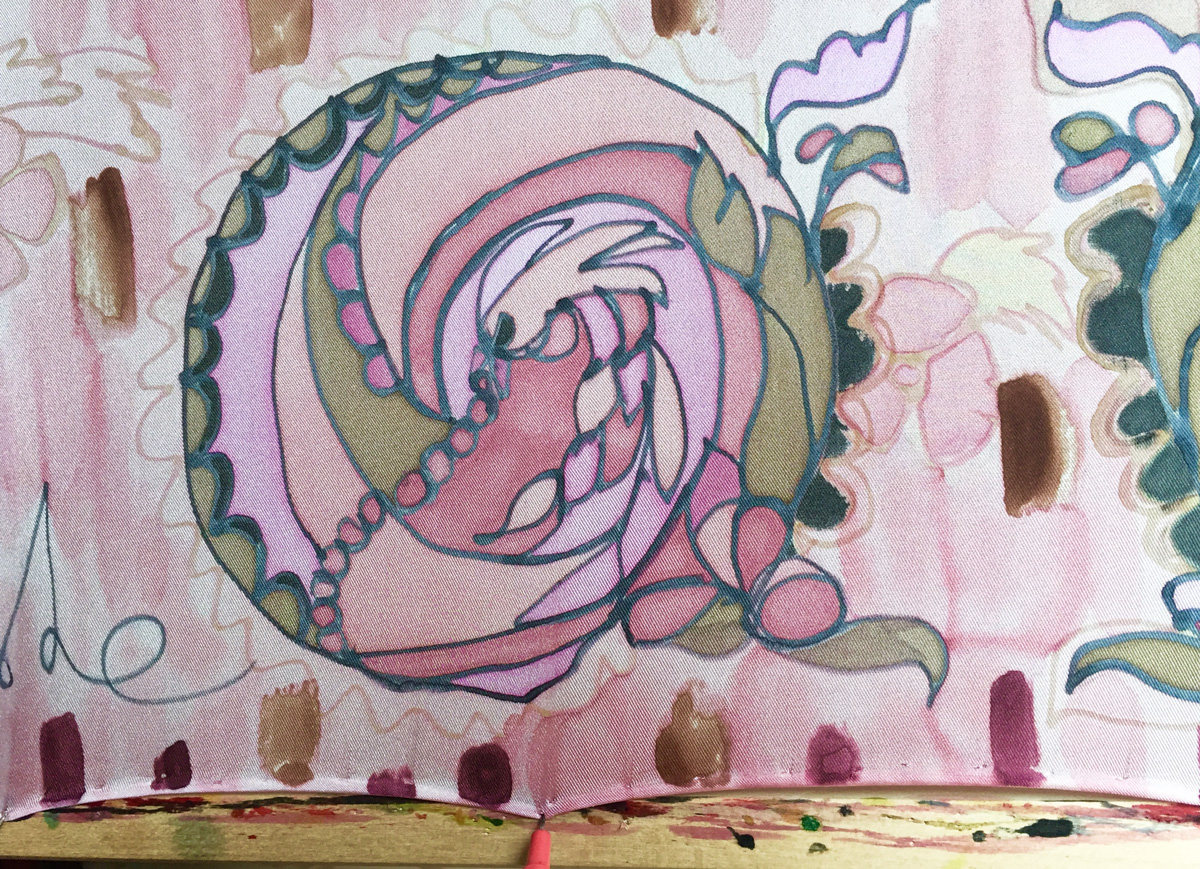 Last week I posted about my discovery of a beautiful example of Tudor woodwork, the Parham fire surround.  I found the detailed carving inspirational and have developed a motif from one of the pheasants lurking in the carved vegetation.

Here is more of the process shown in a few photos as the design is first outlined and then painted with dye, pink, old gold and moss green, on a handkerchief-sized piece of silk. 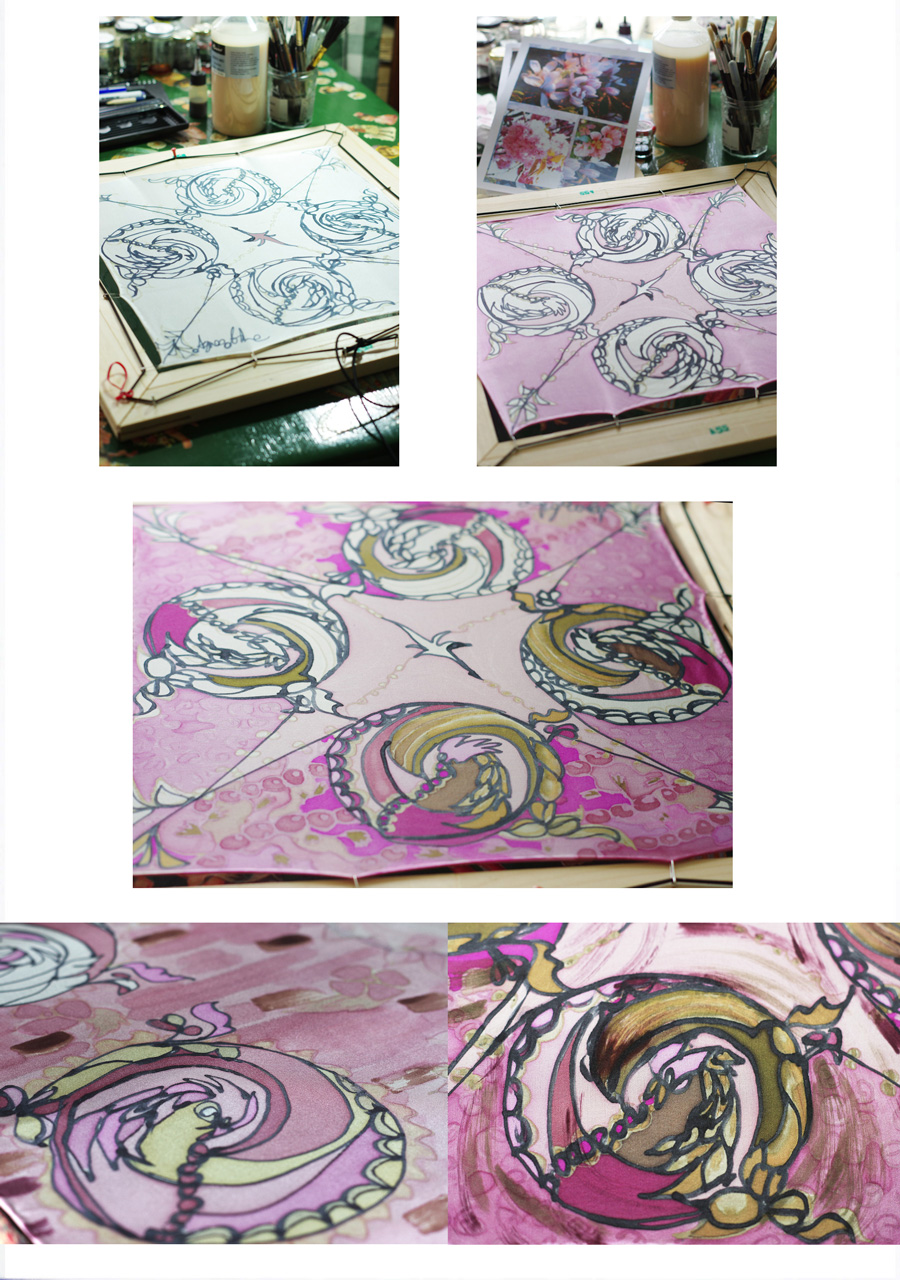 I was not convinced about the old gold so it was dropped when I expanded and transferred the design to a larger, 90 x 90 cm square silk twill scarf. 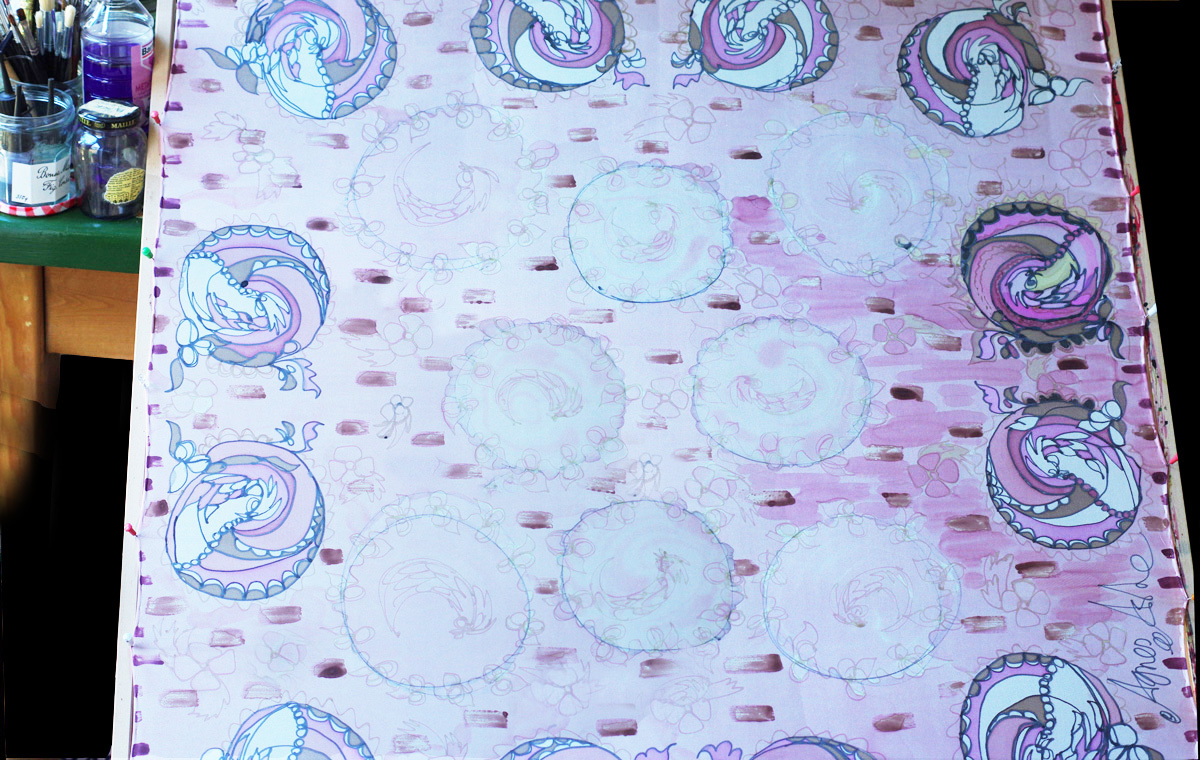 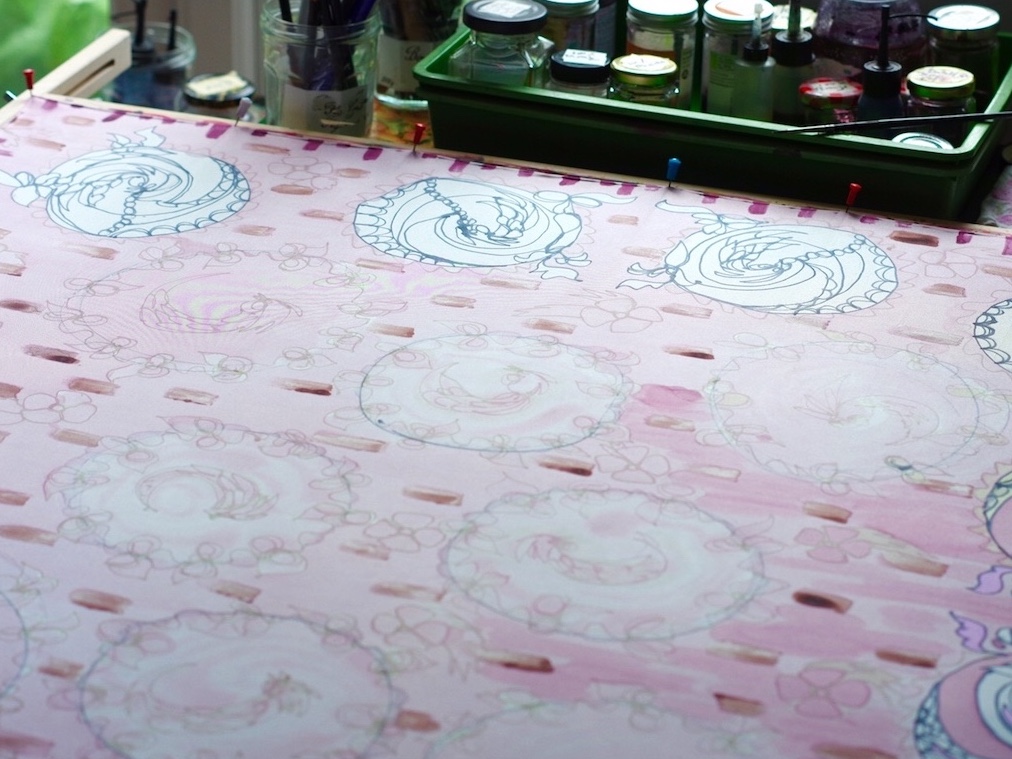 As I recently mentioned June is the month of roses and I do love a classic pink rose – I think that’s why I have been working with pink all this month. 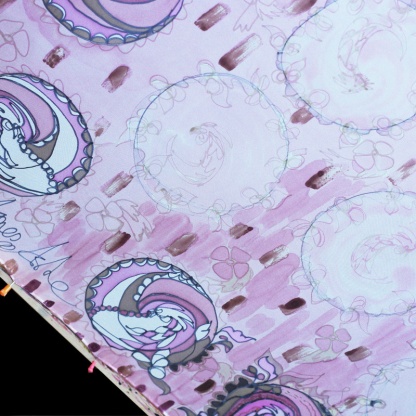 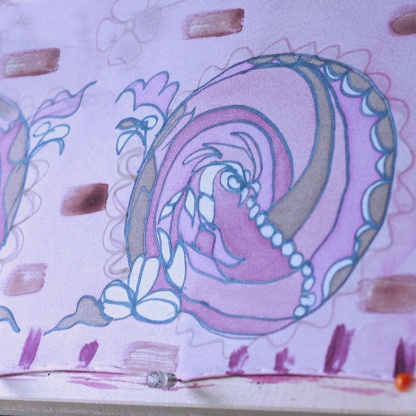 And, the pieces are now ready to be rolled in paper and steamed for a couple of hours to fix the dyes. 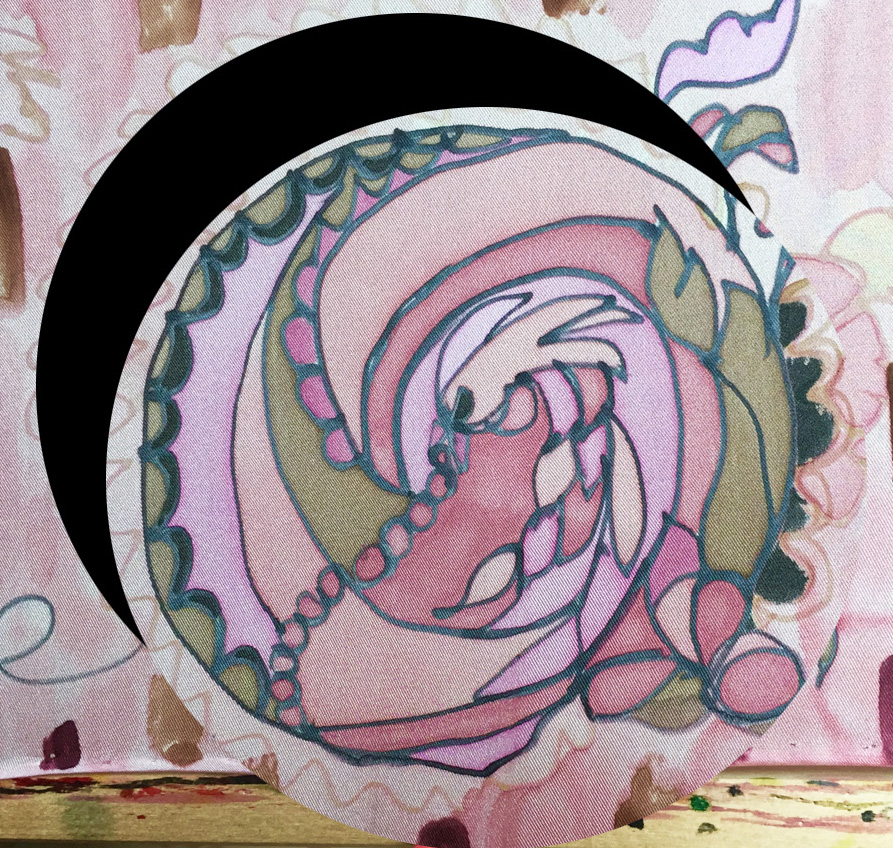 It’s been an odd few weeks. The weather here in East Anglia as with the rest of the UK has been incredibly mild for December. There’s talk it will be the warmest December for over 70 years! Needless to say the garden has a few plants still blooming and some bursting forth completely at the wrong time of year – an early summer hardy geranium is coming into flower. 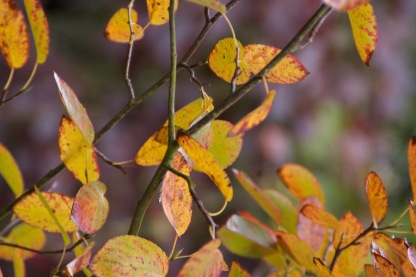 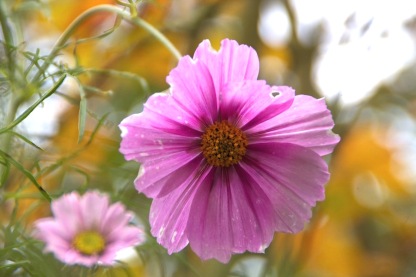 I’m currently working on a couple of long silk twill scarves and belatedly noticed that I had chosen a palette that was a reflection of the colours outside my studio/office window. 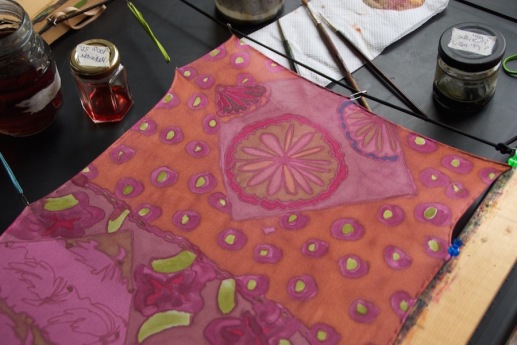 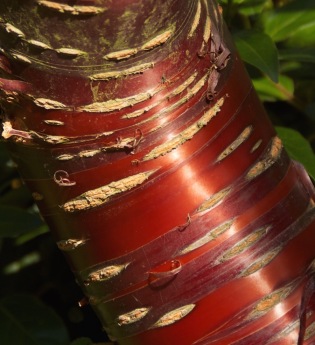 I hadn’t actively looked for inspiration from the garden. I simply felt I wanted to work with rich browns and muddy greens and soft muted pinks. 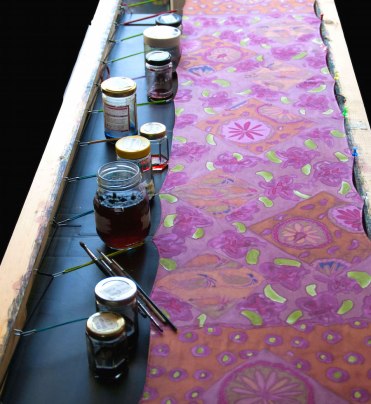 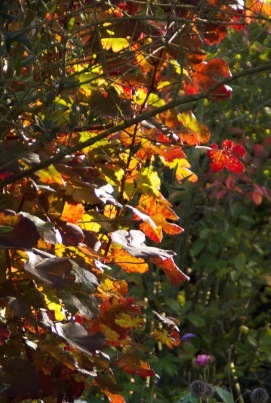 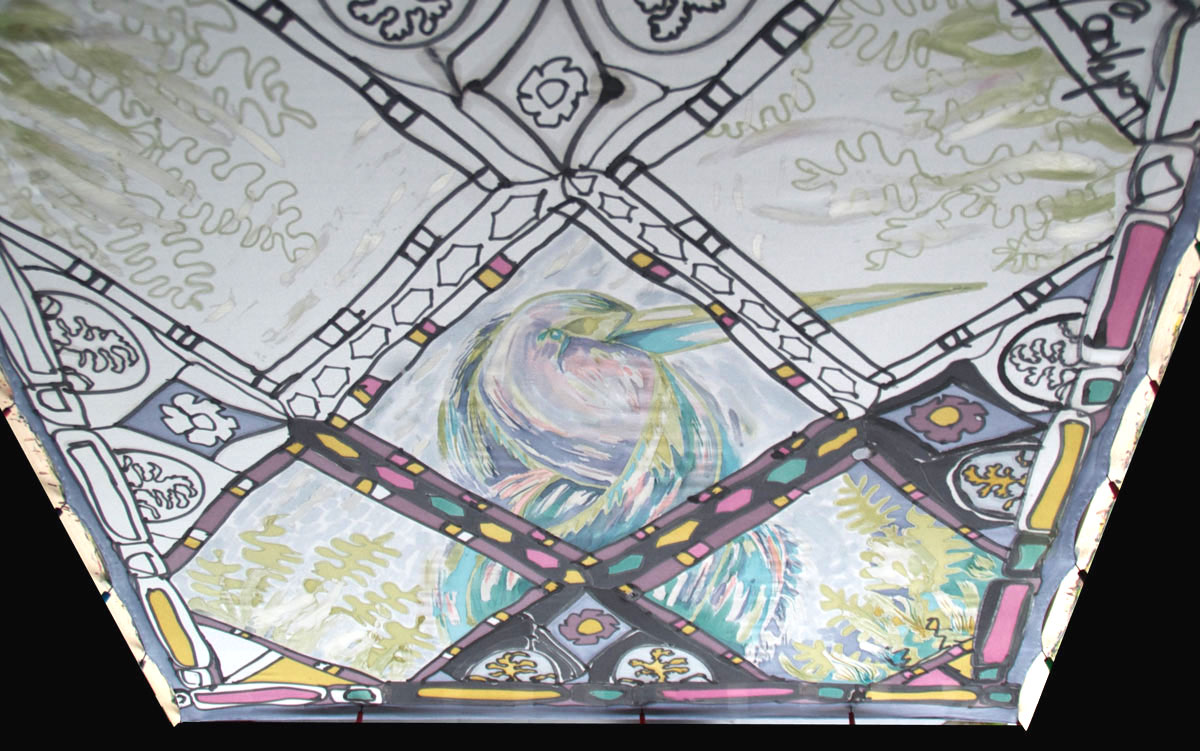 Am almost at the end of stage one. 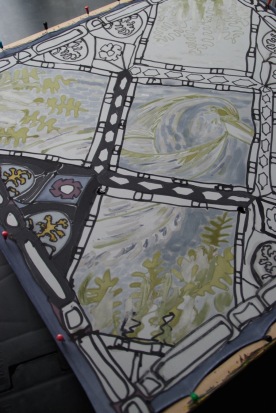 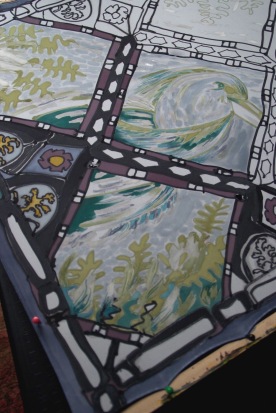 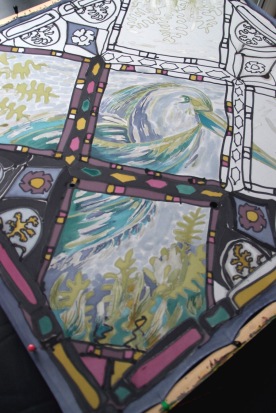 It is going to look very different with a second layer, but I’m going to have to be patient. Before I start the second layer this piece will have to be fixed by steaming for two hours. 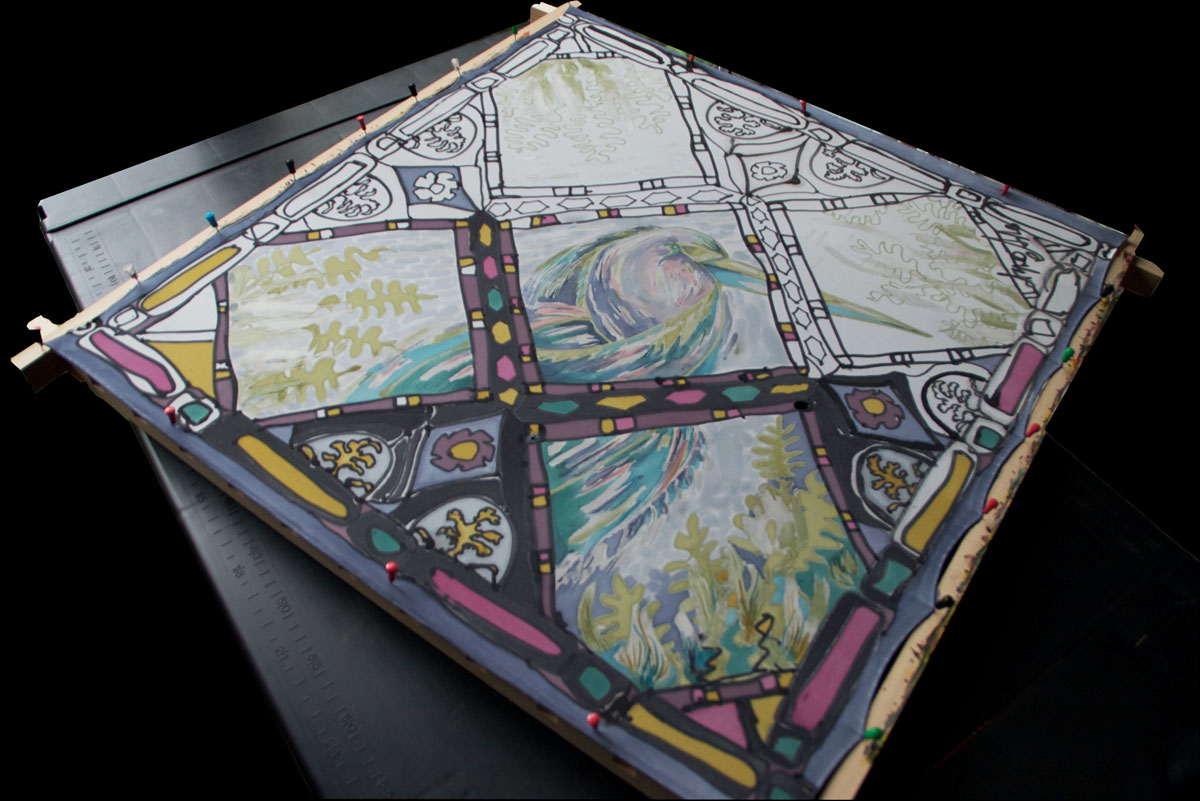 First layer now finished, off the frame and ready to be prepared for steaming. 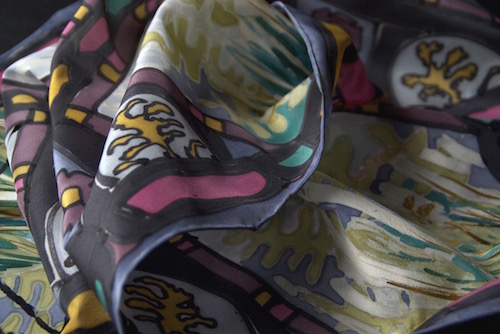 Painted silk may be a framed work of textile art hanging on a wall, or a floaty scarf draped across your shoulders, but it might also be an elaborately constructed 18th-century gown such as this beautiful example below. This stunning museum piece has been carefully restored providing quite a challenge for the conservators at London’s Victoria and Albert Museum. 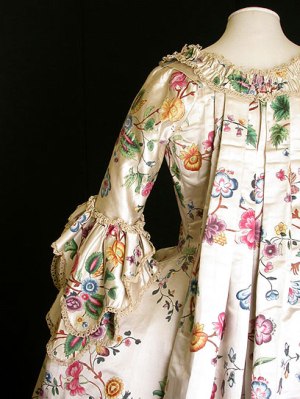 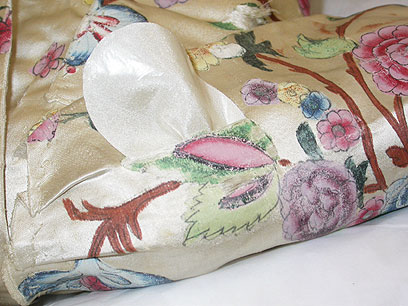 The silk of this sack back gown was woven and painted in China and then shipped to England where it was made into the dress. The silk was painted with paint which sat on the surface of the weave. A process that allowed for free form decoration, but not the colour fastness associated with dyeing as the surface paint could wear away.

Painting with dyes that soaked into the cloth dyeing the silk fibres became possible following the 19th-century Industrial Revolution and the discovery of dyes that could be fixed with steam and not just using dye baths thus allowing for the fixing of dyed patterns printed or painted. Below left, the 1960s George Halley dress has been hand painted with silk dyes, and the painterly silk of Anna Wintour’s dress is dyed even though it looks like painted brushstrokes. I thought it was interesting to see American Vogue’s Editor, Anna Wintour, wearing such a striking and glamorous dress that has a couture appearance yet a definite ‘arty’ feel. 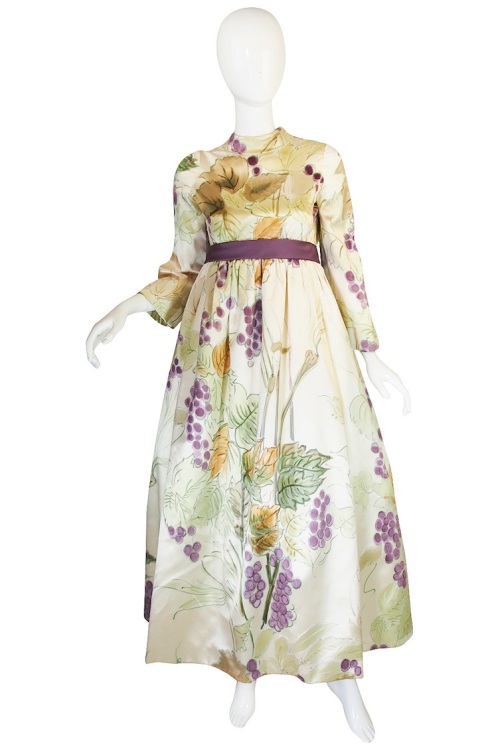 I have just finished a commission for painted silk that will be made into a Prom dress. Of course, no photographs allowed until after the event so here are some shots of work in progress and the finished scarves painted with dyes! 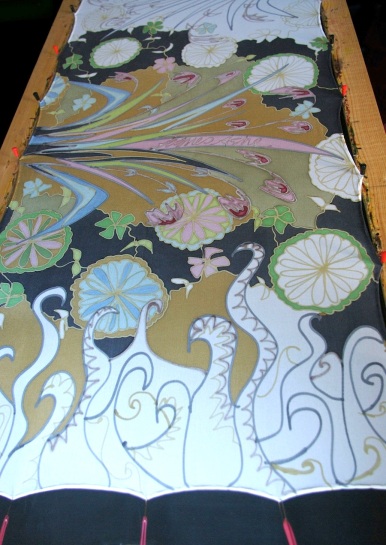 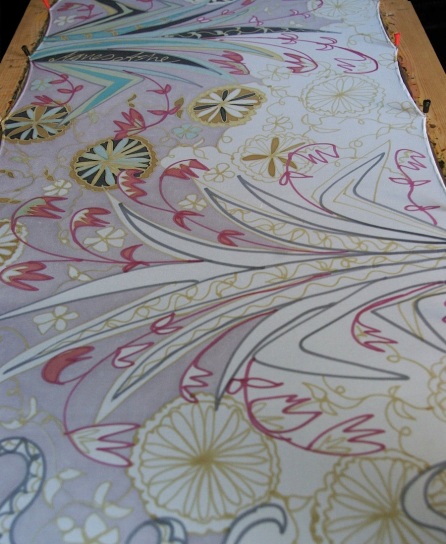 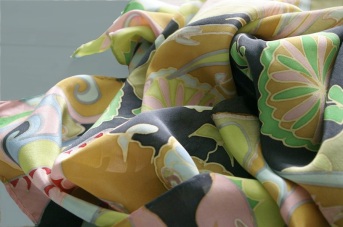 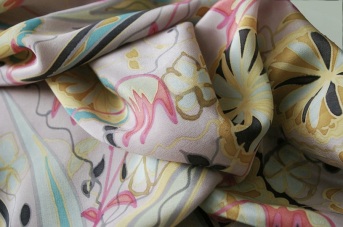