It is amazing that an object, possibly used everyday, that can so easily be dropped or knocked over and broken, could ever survive 250 years, but that is the case with some of these beautiful old teapots.

Of course, many of them have been in grand collections and as such probably infrequently handled. I can imagine that most of these prized painted examples have not been in regular use for a couple of centuries. 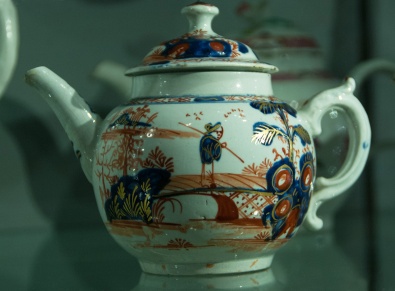 They are currently on display as part of the Early Porcelain (1740-1780) section of the The Twining Teapot Gallery, Norwich Castle Museum.

For most of the 18th century imported tea was an expensive beverage not least as it was heavily taxed. The high price (5 shillings per pound in 1711) affordable only by the wealthy, was also maintained by the virtual monopoly held by the merchants of the East India Company. Although the tax was reduced in 1723 and again in 1745, tea was smuggled into the country. It was also adulterated with other ingredients such as dried hawthorn leaves. I can’t imagine what that tasted like.

Towards the end of the 18th century following pressure from Richard Twining, Chairman of the London Tea Dealers, the Tea and Window Act of 1784 reduced the duty from 119 per cent to 12 per cent per pound. With such a reduction in price tea became available to the lower levels of society and consumption rose, and, within ten years imports had quadrupled and tea smuggling disappeared. It was William Pitt the Younger who introduced these new much lower rates and at the same time, to mitigate the loss of revenue from tea imports, he increased the window tax hence the Tea and Window Act.

Naturally, teapots were used for tea, but, interestingly not exclusively tea. Below, this cream, textured teapot is one such example.  Larger than most of teapots in the Early Porcelain section of the display, it may well have been used for punch. I should think that punch was infinitely preferable to ‘hawthorn’ tea.

Can you imagine pouring your afternoon tea from one of these fascinating teapots? Here we have three delightful quaint teapots that form a little series decorated with scenes from the parable of the Prodigal Son. A parable that has been visually rendered in various forms over the centuries usually as a serious composition in heavy oils which makes these vibrant, slightly racy images from the 18th century so refreshing. These creamware teapots were made by William Greatbatch and can be found in The Twining Teapot Gallery at the Norwich Castle Museum.

Creamware was popular through the 1760s to the 1780s as it was a more affordable earthenware version of fashionable, ‘high society’ porcelain. The development of creamware is a fine example of the mid-eighteenth-century technological drive improving pottery technique and glazing skills to achieve a commercial advantage. Creamware was successfully exported to Europe with English factory catalogues translated into German, Dutch, French and Spanish.

William Greatbatch (1735-1813) was one of the talented potters working with creamware. He was a prolific designer and maker of potters’ moulds during the second half of the 18th century. He ran his own pottery in Staffordshire and sometimes worked for Josiah Wedgwood (1730-1795). These teapots show pictures that have been transfer-printed and coloured with enamels to decorate the thinly potted earthenware. The images are printed onto the teapot that has been covered with a creamy coloured lead glaze. Alternatively, light creamware items were simply embellished with a pithy verse.

It is strange, but my Grandmother died over 20 years ago and I’ve wrapped and unwrapped her blue and white china at least seven times since then as I’ve moved around. And, until now I’d not properly examined it. 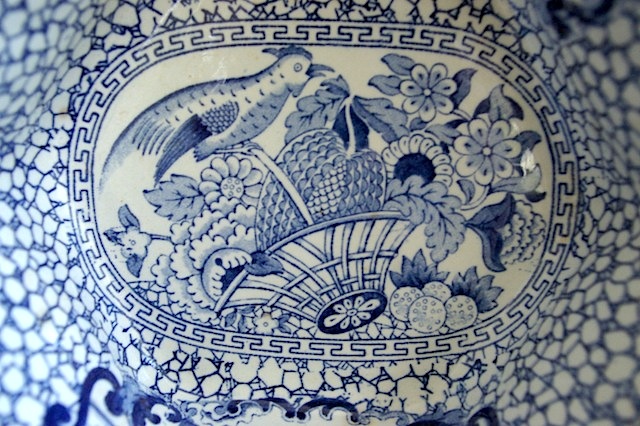 It is from the company of William Adams and the printed mark and registration number (clearly decipherable, 623294) dates from about 1913.

This Pattern was introduced by William Adams in 1780 being a copy of a Chinese & one of the first of its style produced in English pottery.

This pattern was called ‘Chinese Bird’ and continued to be popular through the 1920s and 1930s. It consists of pictorial lozenge panels featuring either asiatic birds or oriental gentlemen surrounded by a blue and white mosaic style pattern. The origin of this pattern of decoration and its longevity is proudly stamped on the bottom of the base of each piece. A kind of promotional strapline, a little puff and a glimpse of 19th-century marketing as mass production took off.

The Adams family of potters had been active working with the kilns of Staffordshire probably since 1650, but by the beginning of the twentieth century ‘William Adams’ was a brand. The original William Adams (1745-1805) had worked for Josiah Wedgwood during the eighteenth century and then successfully launched his own company William Adams, of Greengate, Tunstall, Staffordshire. This business was passed on to his son in 1805, but then sold out of the family to John Meir another Tunstall potter in 1822.

The name does not end there as there were other cousins and relations, one Edward Adams, and another three William Adams who made Staffordshire ceramics in the Potteries during the 19th century. W. Adams, Adams, Adams & Co, Adams Warranted Staffordshire, W Adams & Sons, W A & S, Wm Adams & Co, ADAMS, W Adams & Co Tunstall were used through the 19th and 20th centuries until the business became part of the Wedgwood Group in 1966.

And, spool forwards to December 2016 and I’ve worked the blue and white look to create a hand painted silk scarf (now sold, but other scarves available). 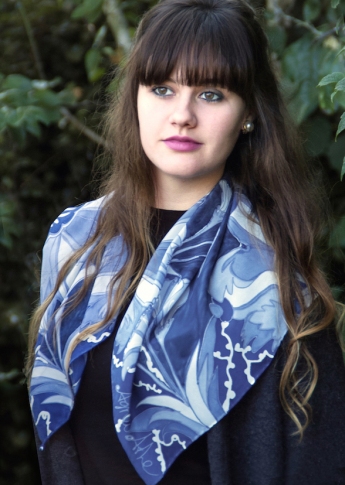 Some objects are beautiful as well as useful, but then time moves on and they become purely ornamental. It would appear that the usefulness of the coffee set has had its day, well, in my home anyway.

Susie Cooper for Josiah Wedgwood and Sons. 1971 Bone china.
Of course, there is nothing to stop you collecting beautiful china and displaying it in its own right as aesthetically pleasing, but there’s a little tinge of sadness when something previously functional is no longer used. And, I’ve realised it is the ugly machine that’s finally taken over in my kitchen this past decade. The Bialetti Moka pot and the cafetière, both attractively designed, had a few glory years, but now they’re permanently at the back of the cupboard as the boring, grey machine actually makes the best coffee.

Nowhere as beautiful as the above Meissen, my own coffee set has suffered the loss of the small milk jug, the sugar bowl has been repaired more than once and the coffee pot has been relegated to occasional use as a flower vase.

Every now and then I’m asked to create a silk piece guided by the colours and decorative qualities of a non-textile form. Sometimes a commission is quite personal, a customer may wish to have a special scarf to remind them of a person or a pet or an event. Or sometimes, and this is more difficult, a sentiment.

People often turn to nature and, in particular, flowers for inspiration for silk painting, but I suggest shape, colour and the decorative details from other human made artefacts can also elicit visually creative solutions. In order to get a firm idea of what a person is looking for I suggest they select pictures that fit their mood. Often beautiful glass and ceramics are a rich source of inspiration and can be reinterpreted and reworked to produce the type of scarf that they are looking for.

In 1784 Sir William Hamilton, the diplomat and polymath brought a Roman antique vase to England where he sold it to the Duchess of Portland. This first century Roman cameo-glass vessel became known as the Portland Vase. Although Roman (thought to date from 5-25 AD) it is not mentioned in the historical record until the beginning of the 17th century. Hamilton bought it from the family Barberini who had owned it for 150 years whilst he was British Ambassador to the Court of Naples.


In 1786, the vase became the property of the Third Duke of Portland who lent the vase to Josiah Wedgwood. Wedgwood was already a renowned ‘star’ of the times and a very successful businessman having made and developed major innovations in earthenware and stoneware pottery. He had developed a cream-coloured glaze over a cream-coloured body known as Creamware and when in 1765 Queen Charlotte commissioned a service from him the range was renamed ‘Queen’s Ware’. From 1772 he began work on developing what we now know as Jasperware. Jasperware is a durable, unglazed porcelain with bas-relief white cameo decoration. Metallic oxide colouring agents are used to stain the white Jasper and Jasperware is usually light blue, but it can also be pale green, lilac, yellow, black or dark blue. And, it was with this dark blue that Wedgwood chose to make his copy. It took four years of trials and experimentation until a reproduction of the Portland Vase was completed in 1790. The British Museum also has a Wedgwood Jasperware copy of the Portland Vase on display in the rooms showing 18th century ceramics.

Wedgwood’s Jasperware copy of the Portland Vase also on display at the British Museum.

Wedgwood’s Jasperware copy of the Portland Vase side view.

The original Portland Vase and the Wedgwood copy became an 18th century cultural hit taking London ‘society’ by storm and made Jasperware the most sought after ceramics in England and on the Continent. It isn’t entirely fair to make a direct comparison between the glass-cameo and the porcelain vases as being made with different materials there are different restrictions, but the Wedgwood version is a beautiful piece even if it isn’t quite as detailed and delicate as the original.

The Jasperware Portland Vase is a technical triumph and copies allow the beauty of the original to be shared. This is also an example of where the inspiration to copy a work from antiquity furthered the technical knowledge of the 18th century. It was such a success that it also secured the ever resourceful and inventive Josiah Wedgwood a permanent place in the history of ceramics. A famous name that still survives with Wedgwood Jasperware products made and collected in the 21st century. 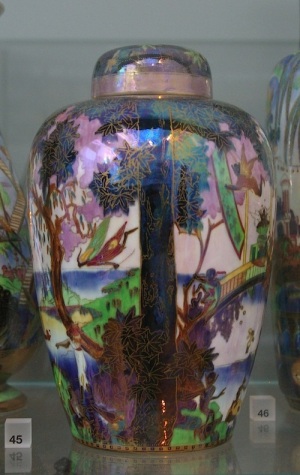