Skip to content
Last month I went to an exhibition being held at the Brunei Gallery, SOAS, the University of London. It was called ‘The Everlasting Flame: Zoroastrianism in History and Imagination’. I was interested in seeing artefacts associated with Zoroastrianism across the centuries from its beginnings in ancient Persia. I first discovered this religion when writing about the visual environment of Late Antiquity looking at the Roman cult of Mithras and early Christian imagery. Light, fire and the light from a flame was of significance for followers of both religions during this period. Fire symbolised purity and there appeared to be a link to Persian Zoroastrianism.
Zoroastrianism is considered to be probably the world’s oldest monotheistic religion originating from the ancient tribes of Iran over 3500 years ago. Central to the Zoroastrian belief system is that there is only one creator God and at the heart of the religious rituals is fire. Fire, the everlasting flame, represents God’s light or God’s wisdom. There is evidence of the Zoroastrian presence in the Bible. In Christianity, the Three Wise Men from the East who bring gold, frankincense and myrrh to the infant Jesus, are sometimes depicted in Persian dress, and they are described as ‘Magi’, a Persian word for a Zoroastrian priest.

It was a fascinating exhibition with at its core a small fire temple consisting of an inner sanctum and out prayer room. Rooms within rooms and a hierarchy of space is an idea repeated in many sacred spaces and I was reminded of a visit I made to the ancient Egyptian Temple of Edfu.

Of course I’m interested in cloth and the display of 18th and 19th century Parsi textiles caught my attention. The Parsi are Zoroastrians who live in modern day India. The exquisite embroidery and the beautiful designs show the variety of symbols that have been incorporated into the more recent interpretations of Zoroastrianism. This is the first time I’ve come across the notion of the ‘sacred fungus’ which according to the accompanying museum labels is a Chinese belief dating back over 4000 years.

Readers and collectors of Chinese porcelain will be familiar with the motif, the symbol of longevity, as seen on Chinese ceramics. 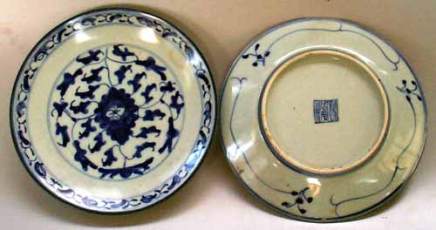 Chinese porcelain sacred fungus motif round the underside of the plate.

The specific fungus, is the lingzhi mushroom (Ganoderma lucidum), and is commonly used in Chinese herbal medicine. This Chinese motif became incorporated into Zoroastrian culture and was embroidered onto Parsi clothing especially smocks (jhabla) worn by children to ward off evil. It is intriguing to see a motif worked in different media, but retain an essence of its original meaning.