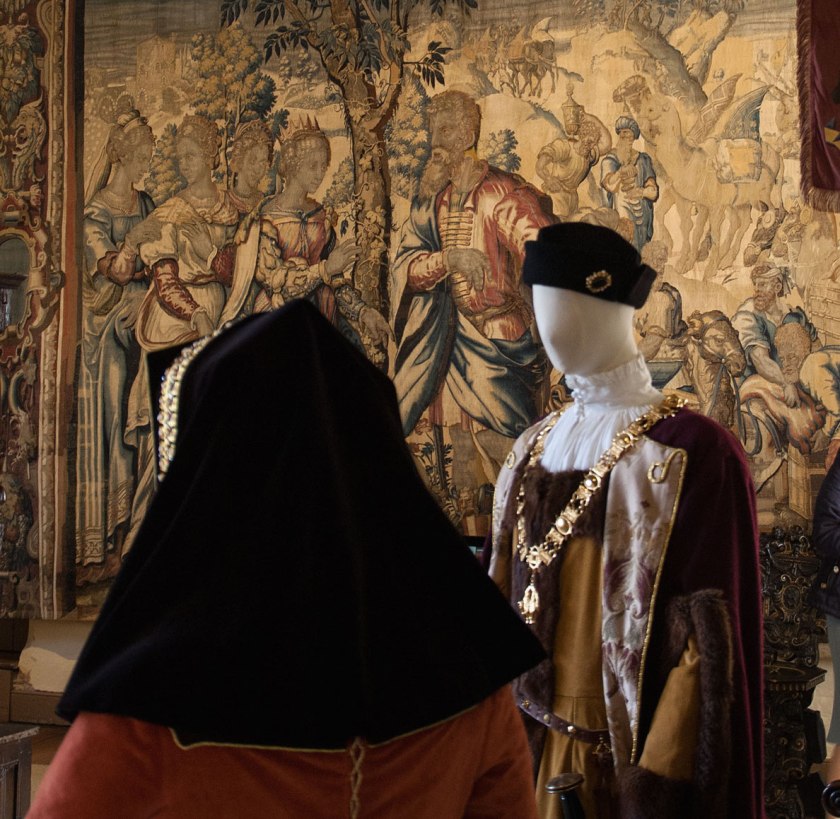 It’s always interesting to go visiting and have the opportunity to climb up a medieval spiral staircase and take in the views from the roof. The original gatehouse of Oxburgh Hall has just such a staircase. Apparently, it used to be possible on a clear day to see across to Ely Cathedral some 20 miles distant before trees obscured the view. 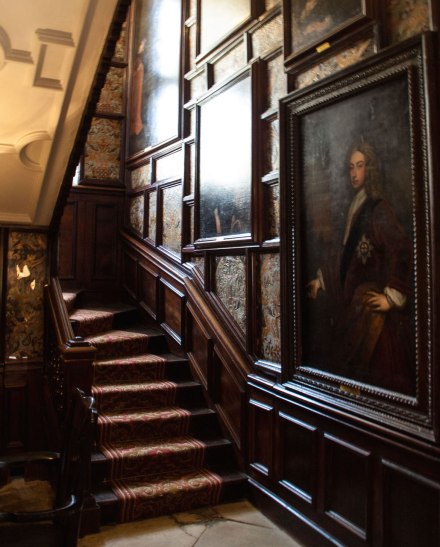 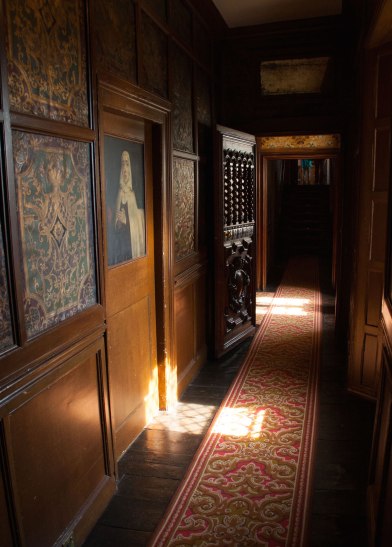 The climb to the roof top begins by taking the North Staircase lined with some amazing and unusual embossed and painted leather wall-coverings. 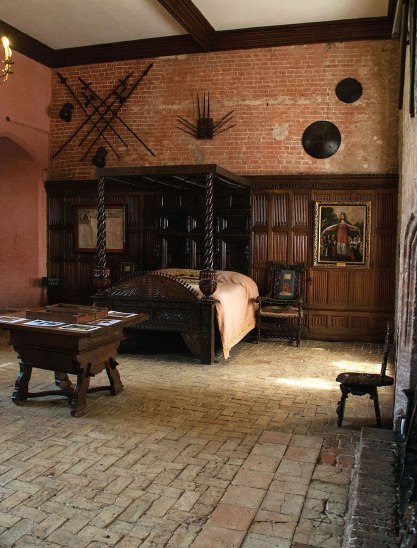 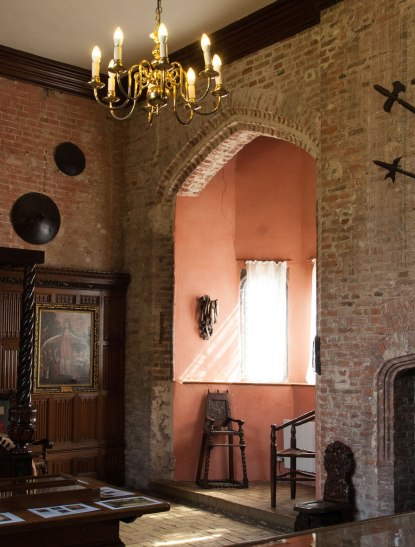 On the first floor of the gatehouse is the King’s Room. It’s called the King’s Room as some time during the late 15th century King Henry VII slept at Oxburgh Hall, but not actually in this room. Just off this chamber is the King’s Room Closet with a small garderobe (medieval loo).  In the corner of this small space there is a brick-topped trap door concealing the entrance to a tiny priest hole hidden beneath.

Now it’s up the spiral staircase to directly above the King’s Room where we find the Queen’s Room . The Queen in question was Henry VII’s wife, Queen Elizabeth of York. The spiral staircase along with the external appearance of the gatehouse is the one part of the Hall that survives from the 15th century without being substantially remodelled and gives us an indication of the superior quality of the original building. When you reach the top the spiral staircase opens onto the roof. More 15th-century details are visible such as the machicolations in the turret walls and a trio of gothic window arches. Machicolations are openings in a wall or floor through which missiles could be thrown down in the event of an attack on the house. 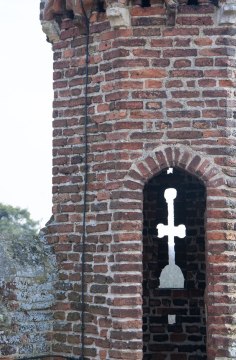 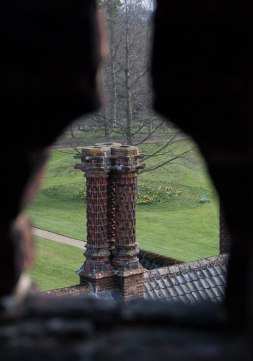 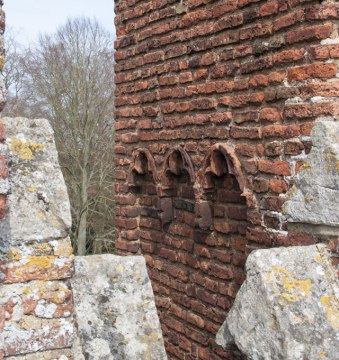 And here are the views looking out into the Norfolk countryside. The photograph on the right is the view to the south-west in the direction of Ely Cathedral. Looking at the near line of trees and the more distant wooded land I think it’s been many decades since anyone glimpsed Ely Cathedral in the distance. 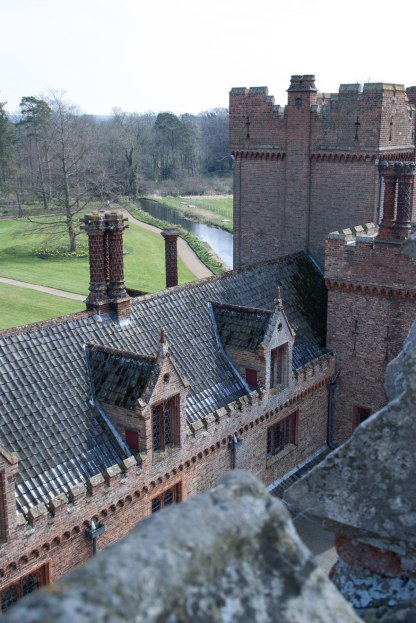 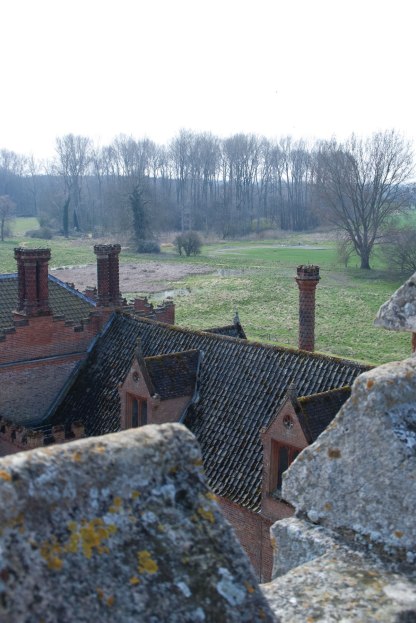 Perusing the National Trust’s guidebook to Oxburgh Hall the recurring theme, we are told, is loyalty. That is, over the centuries, the Bedingfeld family’s loyalty to their Roman Catholic faith and their loyalty to royalty. Obviously, these ‘two loyalties’ have not always been compatible hence the priest hole. I’m not sure what the NT think of their paying visitors, but the tone of their guidebook towards this house and family is bordering on reverential.

Sometimes I think the NT finds it difficult to fully accommodate some of the properties they have been donated and these days with modern marketing they have to have a story to sell, sorry, tell. I don’t envy them this tricky task when promoting Oxburgh Hall. Essentially, Oxburgh Hall is presented as Tudor with its original gatehouse and moat, but in reality, thanks to extensive 19th-century remodelling it is mostly Mock Tudor, sorry that is Gothic Revival. I appreciate that any building existing on the same site for over 500 years has evolved, however I personally feel that authenticity matters when selling ‘heritage’. This house’s story is definitely about survival though how we find it today is probably more about wealthy Victorians and their rose-tinted view of the past. 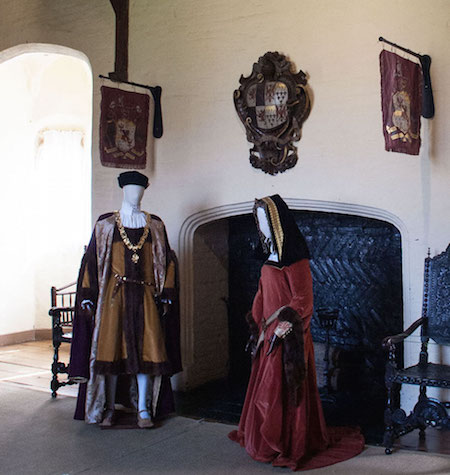