Yesterday, I saw blue flashing lights reflected in my computer screen and looking out across the street I saw the ambulance arriving. An elderly neighbour had been taken seriously ill and was rushed off to hospital. Shocking and a nightmare time for friends and family, but for the wider world just another day. It made me think of our daily lives with the mostly bland routines that occupy us and the Henry David Thoreau comment:

It is not enough to be busy. So are the ants. The question is: What are we busy about?

So, what are we busy about? At best, in a post-industrial, post-modern, virtually post everything time, perhaps, it is thinking, creating and caring. Often when I listen to music, watch a film, or visit an exhibition I’m struck by an individual’s drive to make and present their work to others. At the same time it is interesting to observe audiences keen to engage and consider this output.

A couple of weekends ago I went to the ‘Germany – memories of a nation’ exhibition at the British Museum. It was curated by Neil MacGregor and considered 600 years of German history through a selection of objects. It was advertised as

Explore art by Dürer, Holbein and Richter, and marvel at technological achievements through the ages which gave the world Gutenberg’s printing press, Meissen porcelain, the Bauhaus movement and modern design icon the VW Beetle.

The main reason I went was to see ‘The Four Evangelists’ by Tilman Riemenschneider. Despite timed entry tickets the exhibition was rather crowded. I’m not sure whether a close, intimate feel to the exhibition was intended, but it left me with an overall impression of the space being tight and cluttered. Nevertheless, it was worth seeing the Riemenschneider limewood sculptures up close.

Riemenschneider (1460-1531) worked from Würzburg, Germany, and was a leading guildsman sculpting in wood. Traditionally, religious works such as altarpieces carved in wood were covered in gesso, painted and gilded. During the second half of the fifteenth century in Southern Germany sculptors working in limewood were commissioned to make unadorned, plain pieces. German Protestantism had brought about a change in attitude towards imagery. Instead of an image being an ostentatious, embellished focal point of devotion, works with an emphasis on sober instruction were favoured. A preference for the unpainted together with the qualities of limewood (a light, close-grained wood) facilitated the advancement of delicate and fine carving. Riemenschneider honed his technique and developed a style that featured sensitive and expressive faces.

Seeing ‘The Four Evangelists’ (normally in Berlin) in the exhibition was a treat. The sorrowful face of St Mark complete with small bags under his eyes and the intensely, thoughtful downcast face of St Luke brought a humanity to these religious figures.

Another Riemenschneider work that can be found in the BM’s main collection is ‘The Adoration of the Three Wise Men’.

Riemenschneider – Adoration of the Three Kings 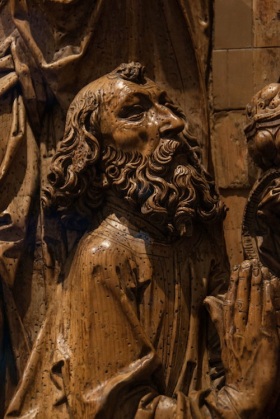 Detail showing veins carved on the back of the hands.

The panel is part of an alterpiece thought to have been commissioned between 1505-10 for the Marienkappelle in Rothenburg, Germany. Again, the work is varnished limewood and the facial details are exquisite.

We cannot all be busy sculpting outstanding masterpieces, but I believe many of us would find the world far less tolerable without our own small acts of creating.