In Part I of ‘Update on upcycled silk scraps’ I wrote about my research in preparation for making a wall hanging to be considered for the exhibition ‘Norwich Shawls: Past Glory, Present Inspiration’.

Ruminating on the harsh and often poorly paid lot of the Norwich weavers, I didn’t want my work to focus purely on the beauty of the Norwich shawls nor particularly draw attention to their privileged owners.

With this in mind, I decided to work in the ‘folk’ medium of rag rug, hooked textiles. Rag rug making was a domestic craft, a necessity practiced in Victorian Britain by the poor, working class. Cloth was never wasted. Clothing was restyled, mended, patched, let down and taken up, and cloth was reused and recycled until unwearable when the ‘rag’ was prodded or hooked into rugs. 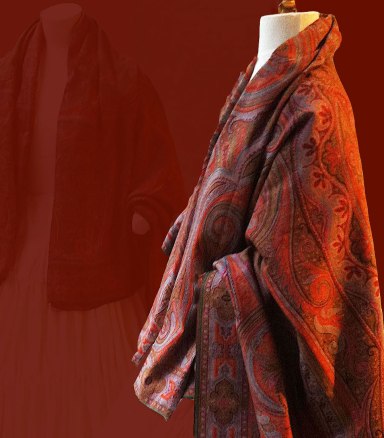 Having chosen the medium I had to decide on the design. I could have simply worked up a design based around the famous boteh – tear drop or Paisley shape (known in Norwich as pines) or used the traditional shawl colours, particularly the rich madder red, in an abstract piece. However, this felt like a more remote and detached response to the weavers’ and dyers’ skills, and offered no hint as to the conditions of theirs and others’ lives associated with the making of the shawls.

After much thought I chose to illustrate an almost faceless, maid servant holding out a shawl for her mistress. I hoped that by choosing to depict a lady’s maid, emerging ghost-like from the background, the viewer would feel the contrast between the luxury shawl and the grey life of Victorian working folk and be less interested in the wearer of the shawl. After all, it would have been one of a lady’s maid’s duties to care for the shawl.

I think it is difficult to be inspired by beautifully crafted work and not think about the people who made it. In the 21st century it is natural to consider the makers as well as the patrons. Here is my finished work.

I am guessing that most of the lucky Victorian owners of these shawls never gave a second thought to the people that wove them, but hopefully they were at least kind to their own maids.

As I mentioned in Part I, photographs were not permitted at the exhibition, but I did manage to sneak a few shots, apologies, not all in focus. 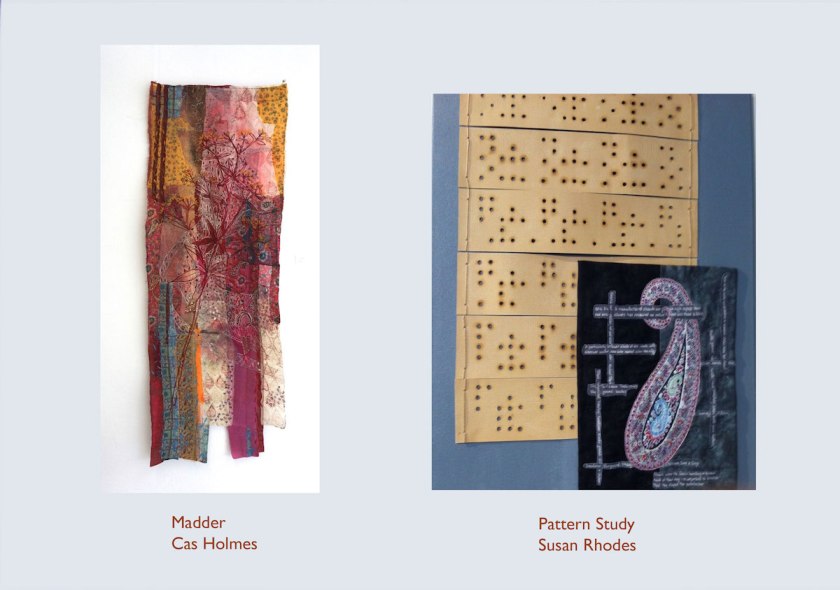 Postscript – I recently found this Review by Nicky Eastaugh of the 2016 exhibition.

Proper old-fashioned sale for 5 days on my online shop. Over half of my work is now 20% off and a few pieces are over 50% off for the next five days. And, delivery is included in the sale price!

General question – ‘What happened to the January Sales?’

I suppose I am old fashioned and I simply can’t get my head round going to the Sales the day after Christmas. When I was a student I worked the Christmas period in Selfridges in London. We definitely did not work on 26th December. According to ‘Visit London’ most famous department stores and major shopping malls will start their sales either on the 26th or 27th December.

Of course, many shops with an online presence will go live with their sales offering at one minute past midnight on Christmas Day. This year I’ve decided to have a New Year Sale. That is I’m going to reduce many of my scarves by 20% and the odd one or two by 50%. These price reductions will be effective for five days from next Thursday, 29th December until midnight Monday 2nd January 2017.

Here’s a preview of some of the scarves and textile art that will be in my sale around the New Year. Oh and yes, as this is my last post before Christmas . . . . . .

I’m just embarking on another longer term project with the aim of making use of the silk offcuts that I’ve collected over the years. Not all the scraps are the colours I want for this new textile hanging, so I’ve been busy re-dyeing batches using a stovetop dye bath. 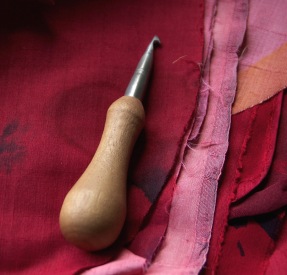 I suppose it’s not surprising that the colours I’ve been putting together are reflecting the fresh yellows, bright greens and varying pinks brightening up my back garden, and that’s despite the recent unseasonal hail.

Once I’ve re-dyed enough silk I will cut long strips ready for hooking. Then whenever I need a break from standing at the computer or standing at my painting frame, I’ll sit, dip into my box of silk strips, and hook a few more inches. It’s a time consuming process, but a few inches each day will eventually, eventually  . . . . .  result in a finished wall hanging.

There was no doubt about it, most of the people that stopped to talk to me at the Parallax Art Fair last weekend were curious about my slightly unusual wall hanging. Older visitors remembered their grandmothers hooking or progging rag rugs during World War Two and recognised the technique, but were not used to seeing luxurious fabrics in rich colours to make such textiles.

Interestingly, several overseas visitors, particularly from North America, paused to chat explaining about their tradition within folk art for hooked rugs and hooked wall art that is still popular. 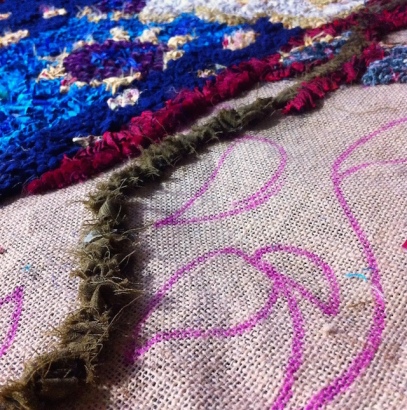 Design for Hilarion wall hanging is drawn out onto hessian. 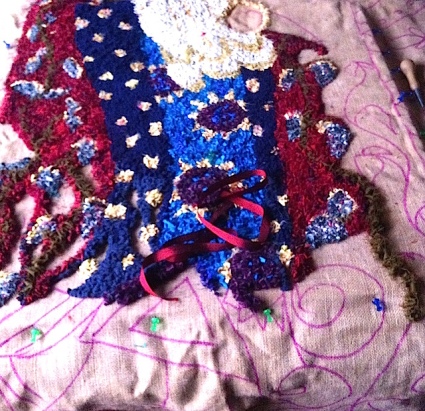 Gradually more and more of the silk, velvet and wool is hooked into the hessian.

For my work it felt quite natural to start using all the painted silk off-cuts I’ve kept over the years. I suppose I could have made sewn, patched pictures, but I was more interested in achieving a deep, tactile surface. And, having said that, most people did ask if they could touch this wall hanging. 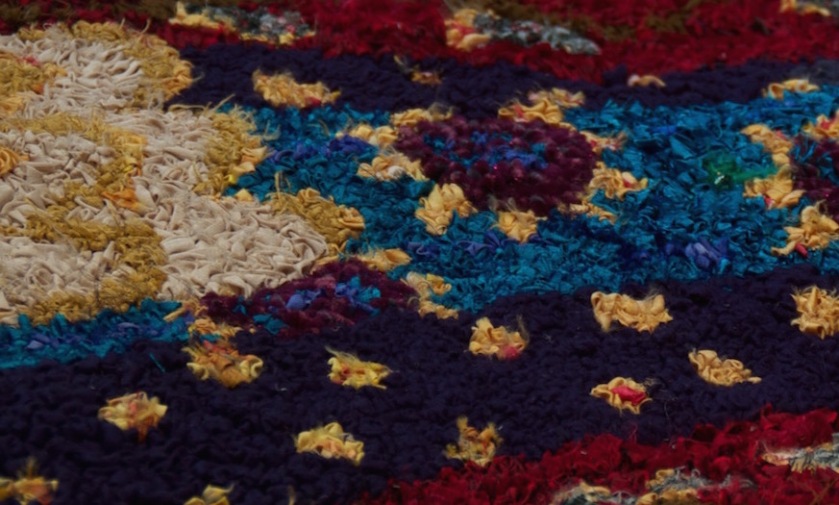 More than one visitor enquired whether it could be used as a rug. Technically it could, but I don’t think the silk areas would wear very well as the fabric is quite fine. Of course, if I had made it entirely of wool and cotton it could be a rug. I still use my recycled blanket wool rag rug my late mother prodded (or progged in some regions) for me – 11 years on my kitchen floor and still going strong! But this piece made with velvets, silk taffeta and my painted silk remnants has really been designed to hang on a wall.

Curiously, I have found it very difficult to photograph and for once it really does look better in real life.

For sale at Agnes Ashe.

I shall be at the Parallax Art Fair (G37) on both days – if you’re around the King’s Road area of London come in and say hello. 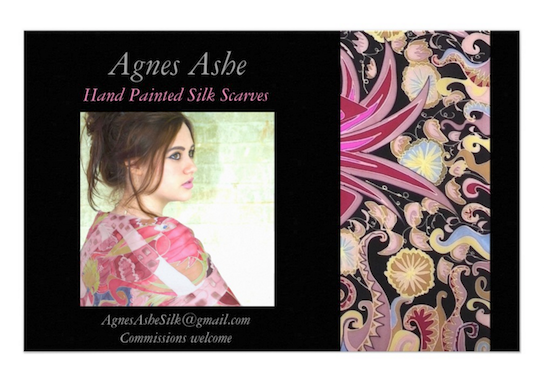 Sometimes you just need to get away from everything for a couple hours and let the wind blow away all the cobwebs in your head. The exposed east coast of Norfolk often has a ‘brisk’ breeze and I usually come back from a walk at Waxham feeling as though I’ve been somewhat sandblasted.

Most of the dogs at the beach seemed to thoroughly enjoy running around off the lead. 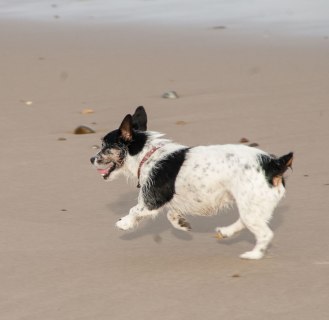 However, not all of them appreciated a soaking by an unexpectedly, energetic wave catching them off guard.

For me, I’m re-energized and feel ready to carry on with the wall hanging and now have a clearer idea how to achieve the finished piece – eventually! 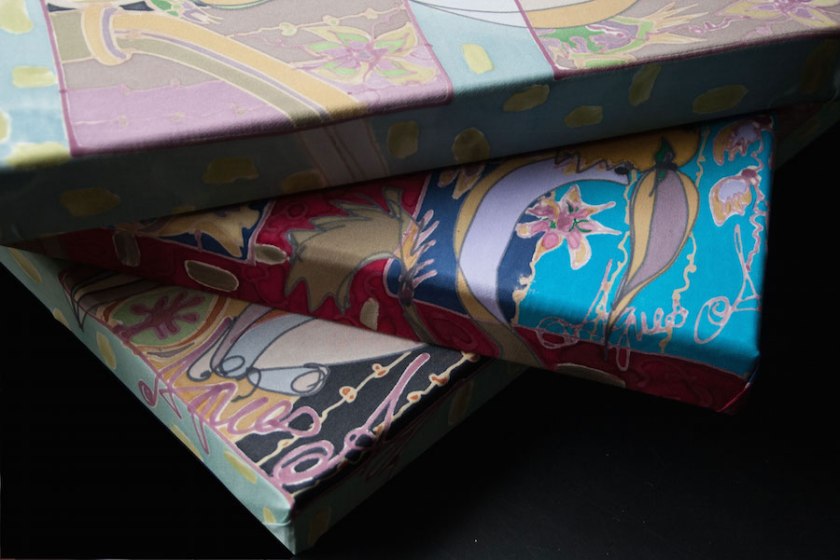 Now looking at this opening photograph you’re perhaps asking, ‘Is this preparation for a literary function?’ ‘Has Agnes decided to write, make, craft a book about painting silk?’ Well, actually no.

Yes, you’ve guessed correctly – it’s silk painting, but not scarves.  Technically the work is being drawn and painted in a similar way, but it has a different starting point. Initially, wearing my art historian’s hat, I revisited my thoughts and interpretations on the Ranworth rood screen. I reread my notes and thoroughly looked through my 100 plus photos of the beautiful yet gently faded apostles and saints. Then I worked up some ideas.

After painting a couple of muted and faded pieces I decided to stick with the time-worn old gold tradition but add in some rich crimsons and deep blues. I think these colours would have been familiar to a medieval cloth merchant, however, including so much zingy turquoise might be too 21st century for a 15th-century sensibility. 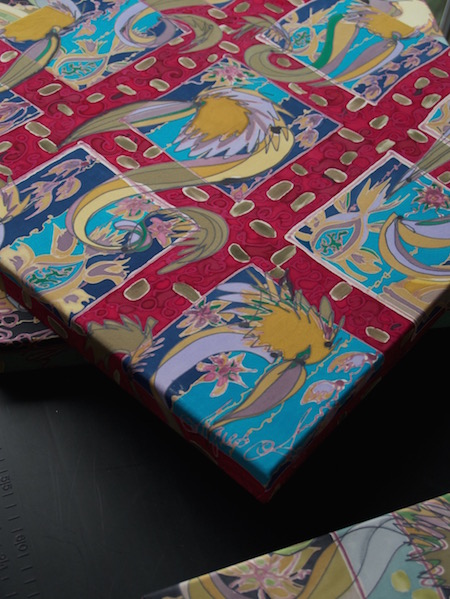 Earlier this year I went to the exhibition ‘Frayed: Textiles on the Edge’ at the Time & Tide Museum in Great Yarmouth. The aim of the exhibition was to highlight examples of embroidered work that had been created by people at times of mental distress. Perhaps the most eye-catching works were two long embroidered ‘letters’ sewn by Lorina Bulwer.

These two pieces are 12ft and 14ft long by about 14 inches wide.  Each ‘letter’ has been worked in coloured wools on pieced cotton grounds using various colours to ensure the text is clear and readable on every different ground.

Lorina (born in Beccles, Suffolk in 1838) made her letters whilst residing in the lunatic wing of Great Yarmouth Workhouse between 1900 and 1910. Many of the words are underlined as she angrily relates her story including writing about her family, neighbours and her troubled life.

When I saw Lorina’s work I remembered Tracy Emin’s provocative textile creations. Maybe the soft pliable quality of embroidered cloth and the frequent prettiness of embroidery magnifies the power of angry text. It was an inspiring exhibition and has led me to work a design for a scarf using text. My words are places in Suffolk and Norfolk surrounded by a few lines of verse from various poems by William Blake. I chose Blake as his words were also the words of an angry outsider.

There is a display at the Time and Tide Museum, Great Yarmouth, Norfolk that shows a 1940s bedroom with an old-fashioned rag rug placed in front of the fire.

I remember my Grandmother had one similarly placed in her sitting room only hers was to protect her polished floorboards from sparks. And, the little rug disappeared whenever there were visitors.

Now, I said ‘old-fashioned’, but perhaps I should have said vintage or ‘upcycled’. In 1997, remembering that little rug I persuaded my mother to ‘prod’ one for me. She was very patient. I drew out the design on a piece of hessian, provided her with a colour guide and gave her a bundle of old woollen cloth. 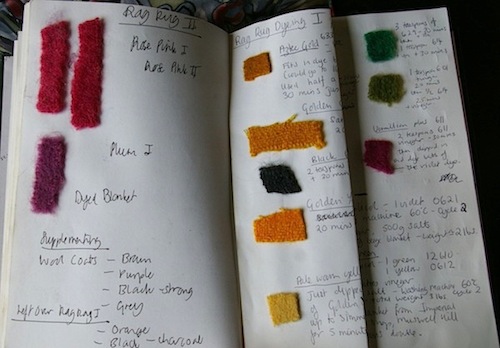 The rich colours, the dark red, brown and purple, are from old coats bought from charity shops along with some old blankets. Blankets tend to wear out in the middle leaving the edges still thick and useful. I cut off the edges and dyed them to make the oranges and pinks. 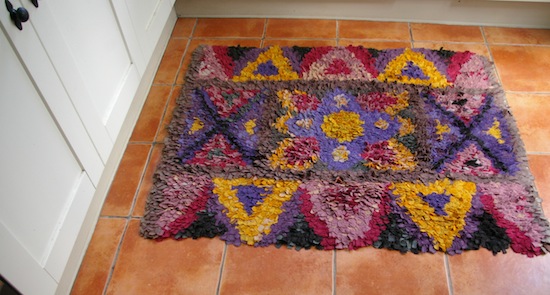 Originally made for a bedroom in a previous house, the rag rug is now in my kitchen. Ten years on the kitchen floor and it’s wearing very well!