Today, 21 October, is Trafalgar Day in the UK. A school history textbook date when in 1805 Vice Admiral Lord Nelson died at the Battle of Trafalgar. He was commanding the British navy when he was fatally shot on the quarterdeck of HMS Victory during the battle that saw the combined French and Spanish fleets defeated.


Nelson was a son of Norfolk born at Burnham Thorpe in 1758 and had become a national hero following the Battle of the Nile in 1798 when his ships successfully destroyed Napoleon’s fleet. He was also the subject of 21st-century style gossip when he lived with his friend Sir William Hamilton and Hamilton’s wife, Lady Emma Hamilton, first in Naples and then later at Merton Place, South London. Gillray’s satirical cartoon pokes fun at Emma Hamilton depicting her as Dido posed in distress watching Nelson’s fleet disappearing as an old man is seen sleeping behind her. The text at the bottom of the print reads
‘”Ah, where, & ah where, is my gallant Sailor gone” ? –
“He’s gone to Fight the Frenchmen, for George upon the Throne,
“He’s gone to Fight ye Frenchmen, t’loose t’other Arm & Eye,
“And left me with the old Antiques, to lay me down, & Cry.’

During the 18th century printed matter became widely available and a variety of newspapers, pamphlets and prints were in circulation. The contemporary ‘media’ reports of Nelson’s achievements and also the speculation surrounding his relationship with Emma Hamilton fed the nation’s interest in Nelson and contributed to the making of a national hero. Viewed in this light it was only natural when Nelson died in battle that he should be honoured with a state funeral. A state funeral for a commoner was an unprecedented situation, and when the news of Nelson’s death reached London from Cape Trafalgar, the Lord Chancellor’s Office began detailed preparations in order to provide the English public the opportunity to mourn their hero.

Nelson’s body had been preserved in a casket filled with brandy for the journey back to London, and on 21 December 1805 was placed, as instructed in his will, in a special coffin made from the wood of the French ship, L’orient. L’orient had been a French battleship blown up at the Battle of the Nile. It would appear that when Nelson wrote his will he was conscious of his public status and his preference for a plain coffin significantly made from the L’orient wood, served to remind the public of his navel prowess. However, for the funeral ‘event’ the plain wooden coffin was encased in an elaborate gilded black casket. During the three days of the lying in state (4th to 6th January 1806) at Greenwich Hospital it is estimated that over 100,000 people came to pay their last respects. Then on the 8th January 1806 the coffin was transported up the River Thames to Whitehall by the King’s Barge accompanied by a flotilla of boats forming the Grand River Procession.

The following day the coffin was transported in a procession through the crowd-lined streets of London culminating in a funeral service at the nation’s church, St Paul’s in the City of London. Along with Nelson’s relatives all types of dignitaries attended the service, but neither Emma Hamilton nor their daughter, Horatia, were invited. The coffin was carried on a funeral car designed to look like HMS Victory and covered with a black velvet pall with the white ensign from HMS Victory draped over the coffin. Sailors from HMS Victory accompanied the coffin into St Paul’s and at some point during the funeral service the white ensign was torn into pieces by the sailors and shared out between them. These pieces were some of the earliest Nelson mementos.

A contemporary illustration of Nelson’s funeral car designed to look like HMS Victory. The special heraldic panels are shown and I have seen the black velvet drape with the Regency gilded lettering ‘TRAFALGAR’. It was donated to the Sailor’s Home Museum on Great Yarmouth’s Marine Parade in 1861.
http://www.forumheritageblog.co.uk/nelsons-funeral-drape-to-be-displayed-in-norwich/%5B/caption%5D

Over the following two centuries Nelson has remained a significant national hero and during this time all kinds of memorabilia has been made and collected, and is still manufactured to this day.

Pottery loving cup decorated with illustrations of the Battle of Trafalgar and figure group including Nelson. 20th-century mug made by Cavendish Fitzroy, London. 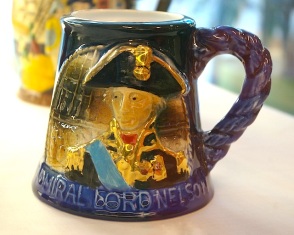 Blue earthenware tankard with inscriptions and images in relief with a rope design handle. Number 310 of 500 made by Great Yarmouth Potteries, c 1990s.

Fascination, interest and historical research continues and the latest findings are to feature in the National Maritime Museum’s new Nelson, Navy, Nation gallery which opens, today, 21st October 2013, the 208th anniversary of the battle.