Please excuse my wobbly video skills and the occasional breakthrough traffic sounds, but it was an experience worthy of capture and sharing. It lasted for 11 minutes, but despite trying on several different days I only managed two or three minute chunks before a lorry, ambulance or helicopter disturbed the atmospheric impression.

ClarionCall1 from Agnes Ashe on Vimeo.

From the banks of large speakers atop several buildings around the Waterfront the sounds were transmitted across the water and up into the town centre with parts of the recording heard as far away as the Old Cemetery. 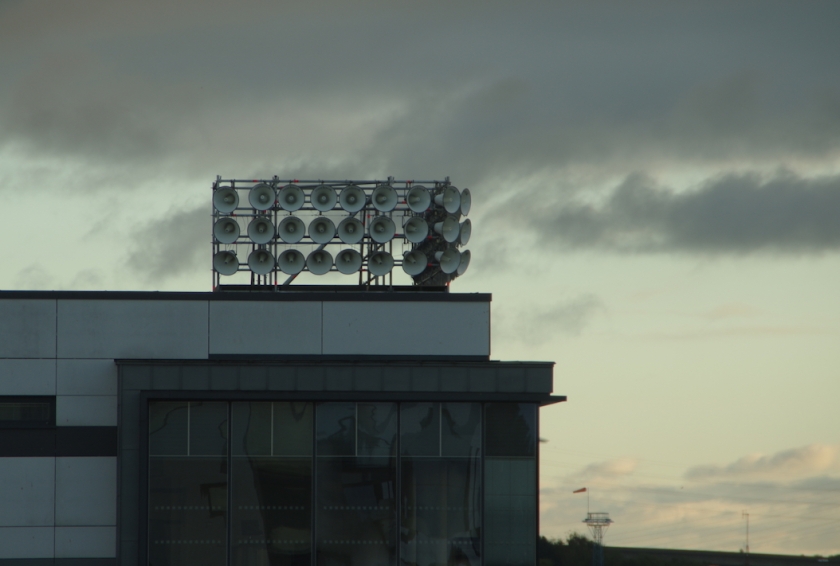 ‘Clarion Call’ has been part of Ipswich’s commemorations of the First World War centenary using voice and sounds of the emergency sirens. The work evolved from considering the experiences of the town’s womenfolk when many of the local men went off overseas to war and never returned.

ClarionCall2 from Agnes Ashe on Vimeo.

‘Clarion Call’ has been devised as part of the 14-18 NOW, the UK’s arts programme for the First World War centenary. It has been created by artists Byron J Scullin, Hannah Fox and Thomas Supple with performance contributions from Beth Gibbons (Portishead), Elizabeth Fraser (Cocteau Twins), girls from Copleston School, Wattisham Military Wives Choir, South Street Kids amongst other individuals and choirs.

(There is also a longer, two and half minute clip on my Vimeo page, but my iPhone video skills are, as I already mentioned, very poor and the swinging around of the visuals gives me a touch of seasickness! However, it is worth a listen you just need to keep your eyes shut. 😌)