Back in 2014, one year after I opened my online shop, it became clear that ‘Agnes Ashe’ should be on Instagram. The occasion that prompted my boarding this particular social media train was when the US craft platform, Etsy, decided to make a UK television advert. In order to be included in the selection procedure Etsy wanted to see your work on Instagram.

The above is the first post I made on Instagram back on 8th May 2014 and over the next couple of weeks the pictures uploaded on a daily basis included my painted silk scarves, flowers, my garden and, of course, the ubiquitous coffee shot!

I haven’t posted a coffee photo in years and it is rare that I post any food or cooking pictures these days, but I still post many flowers and, needless to say, my silk painting work. But, in this fast moving world of everything social media, Instagram, is not the same platform it was back in 2014.

Instagram has been around for about 11 years and during the first five years there were no significant algorithm changes, not even when Facebook bought the platform in 2012 as Instagram hit 50 million active users. By the time I joined in 2014, Facebook had already introduced advertising the previous year despite considerable grumbling from their longtime users.

However, 2016 was the watershed year when ‘the Algorithm’ (basically how other people find and see your posts) was totally overhauled. From this time onwards Instagram and visibility have been a moveable feast. I guess for high profile Instagram stars and celebrities it is all part of the social media game, but for regular individuals or small businesses posting on Instagram whether simple posts, stories (recent example below) or reels, it is not quite the useful beast it once was. It has turned into somewhat of a voracious monster for me gobbling up my working time prepping not only photos, but videos and slideshows. I suppose some aspects of social media work are creative, but I would rather be creating and painting scarves.

Some time ago I painted my ‘La Donna’ series of silk scarves. Two of the five colour combinations I created didn’t really chime with the contemporary trends, however they both sold quickly. Then the green version was purchased as a gift and it was duly shipped to Singapore. It had been my favourite of the series. It is one of those oddities, for me anyway, when I take over 300 photos during a shoot how often the single best photograph turns out to be my current favourite piece.

Returning to this series as a whole the lilac and pink versions have not been successful colour combinations. I am surprised as generally any of my scarves with a fair amount of pink have sold well not least as the softer pinks are a complementary colour for wearing near the face. Mind you looking at the photographs of the lilac scarf I can see it looks more dull and dreary than restrained and muted. Although I do have to mention that lilac, in a similar way to red, isn’t accurately captured in a photograph and as with most of my work the scarves do look better in real life. Anyway, it was time to jazz up both the pink and the lilac and I think make the patterning more complex.

Firstly, I tackled the lilac one. I repainted the lilac area adding a deeper mauve that together with the new fuchsia highlights has resulted in an overall brighter, more zingy appearance. Also, I think building more complexity into the black and white areas has balanced the overall feel of the scarf.

As usual with photographing colour the resultant image always varies with the light, but happily this daylight shot (below) is a fair representation.

Next I turned to the pink scarf, but felt this one already had enough pinky pinkiness about it and it didn’t need the background changing. It just needed an overall pulling together of the different design components.

This has been achieved by adding more patterning to the black and white areas and at the same time integrating the blue patterned band using a zigzag magenta border.

I had always been pleased with the design of this series and I did like the original pink interpretation, nevertheless I am much happier with this intensified more vibrant version. 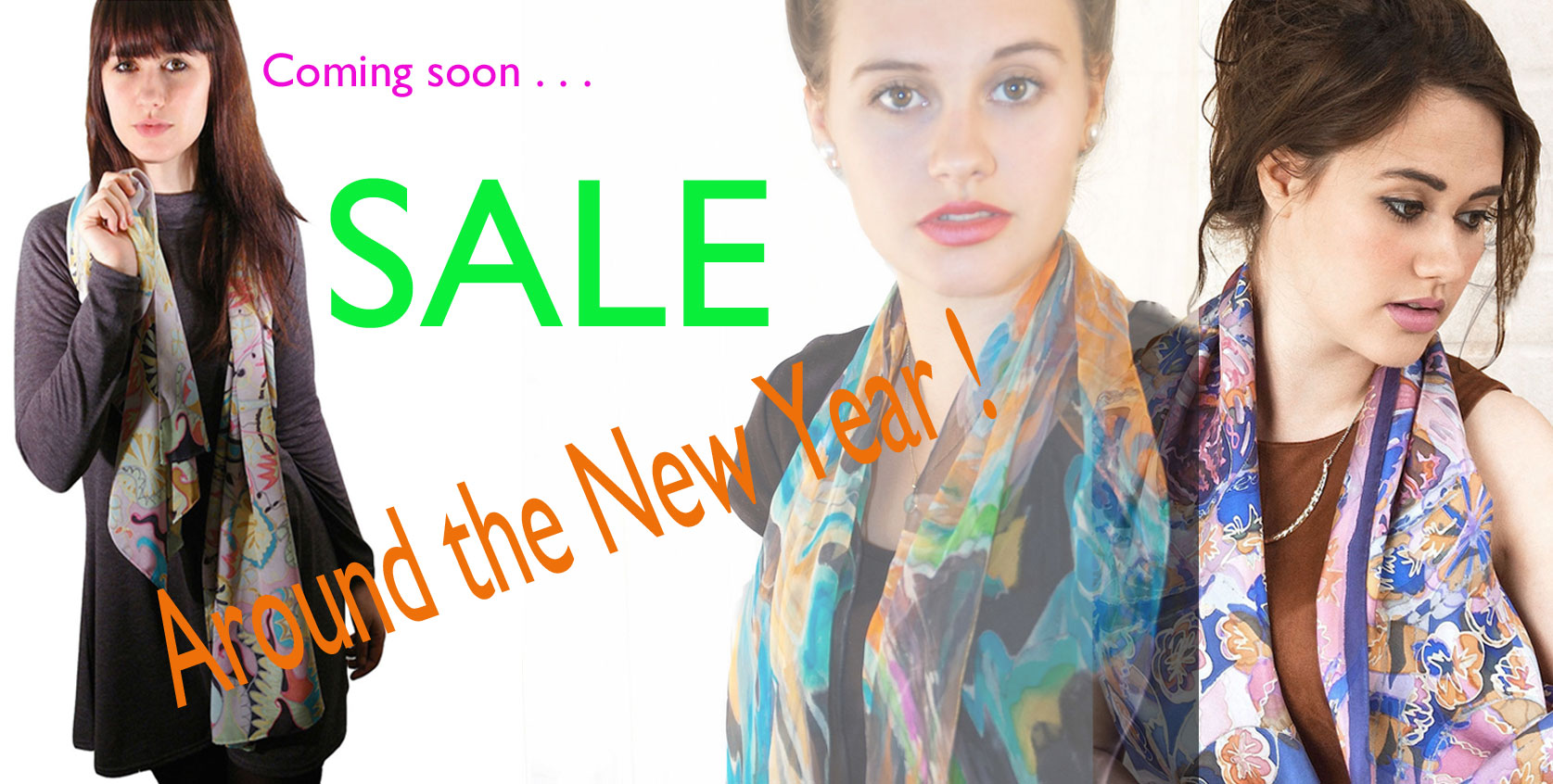 General question – ‘What happened to the January Sales?’

I suppose I am old fashioned and I simply can’t get my head round going to the Sales the day after Christmas. When I was a student I worked the Christmas period in Selfridges in London. We definitely did not work on 26th December. According to ‘Visit London’ most famous department stores and major shopping malls will start their sales either on the 26th or 27th December.

Of course, many shops with an online presence will go live with their sales offering at one minute past midnight on Christmas Day. This year I’ve decided to have a New Year Sale. That is I’m going to reduce many of my scarves by 20% and the odd one or two by 50%. These price reductions will be effective for five days from next Thursday, 29th December until midnight Monday 2nd January 2017. 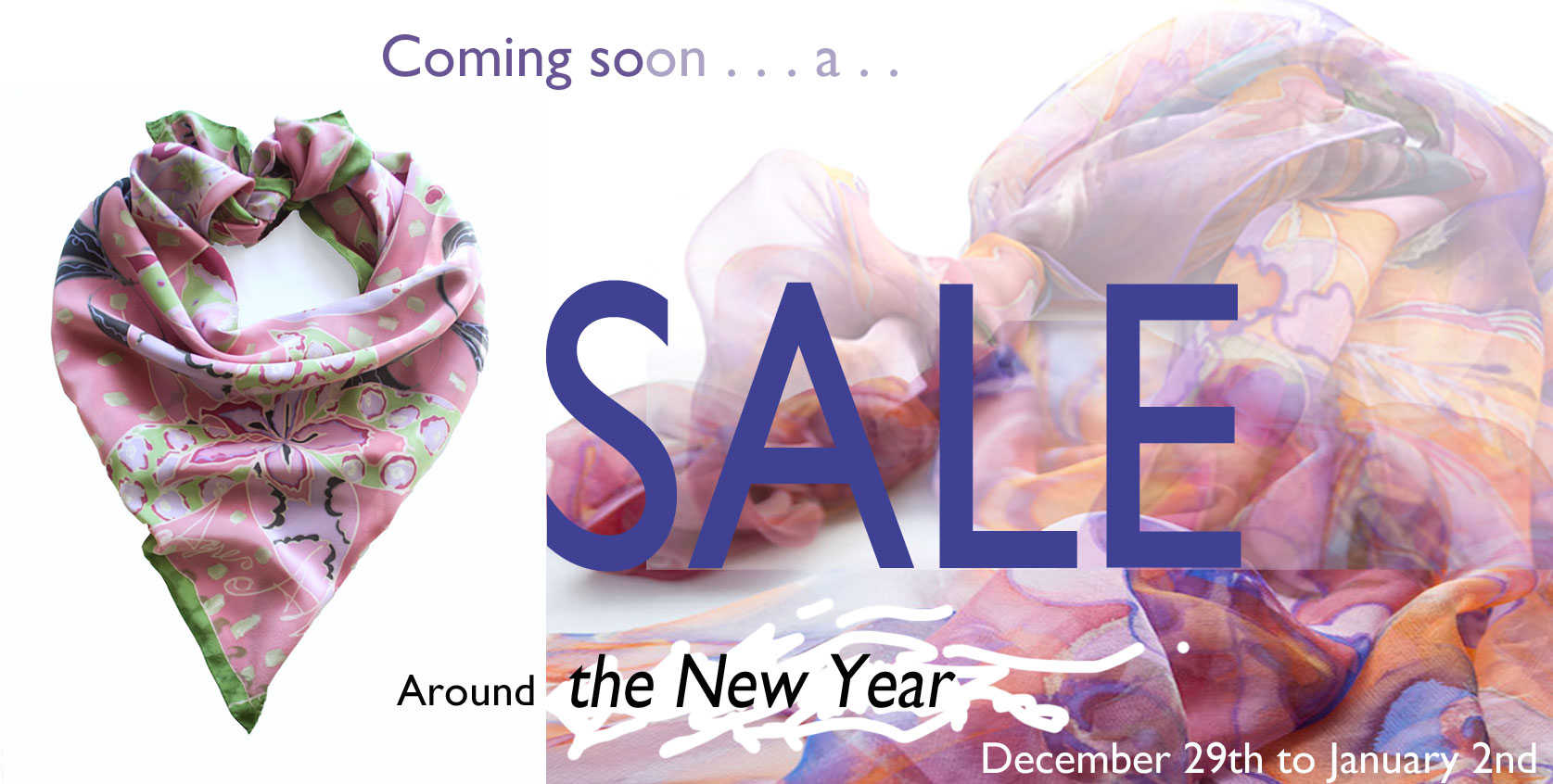 Here’s a preview of some of the scarves and textile art that will be in my sale around the New Year. Oh and yes, as this is my last post before Christmas . . . . . .