If you have been to see or are going to see the latest Christopher Nolan film ‘Dunkirk’ then you will have seen or be seeing ‘Xylonite’, an old Thames Barge. The film ‘Dunkirk’ is a dramatisation of the evacuation of over 330,00 Allied troops from the sandy beaches of Dunkerque in northern France. These shocking events took place between 27th May and 4th June in the summer of 1940 during World War Two.

Please excuse my ignorance, but I didn’t have any prior knowledge about the role played by any Thames barges during the Dunkirk evacuation, but as I watched the film I spotted a type of boat I thought I recognised. And, yes, I did. It was one of the old Thames barges. Currently (as I write) several very similar sister barges are moored at the Ipswich Waterfront one of which is ‘Thistle’ (top photo) recently arrived joining ‘Victor’ (featured in a previous post), ‘Thalatta’ and ‘Centaur’.

In real life, in 1940, thirty Thames barges took part in the evacuation, but only a handful of these vessels have survived into the 21st century. ‘Greta’, ‘Ena’ and ‘Pudge’ are still sailing and ‘Tollesbury’ is currently being restored whilst ‘Beatrice Maud’ is used as a houseboat.

Last month several other barges visited the Ipswich port and moored at the Neptune Quay amongst the visitors was the beautiful old, Dunkirk survivor ‘Pudge’ . 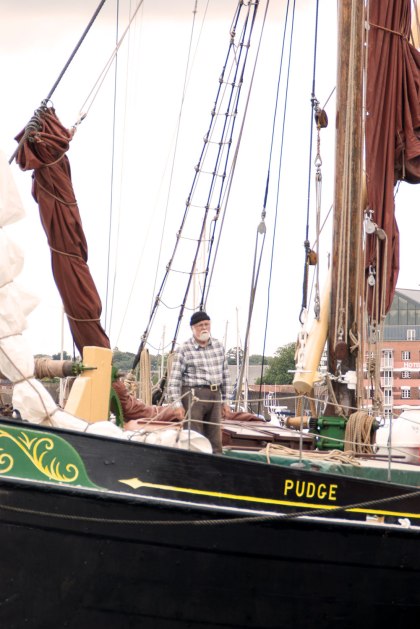 This historic sailing craft has quite a story to tell  and the quote below (taken from her website) relates her WW 2 exploits.

Her working life as a cargo carrier was interrupted in spectacular fashion by the Second World War when she was requisitioned in May 1940 whilst in Tilbury, drafted to Dover and thence to Dunkirk to aid the evacuation. Three barges including Pudge were taken in tow by a tug and crossed the Channel under cover of darkness. As they reached the beaches at Dunkirk an explosion lifted Pudge out of the water and, in the words of her skipper, “she came down the right way up”. She took onboard survivors and set off for England, picking up a tow from a tug on the way, to arrive safely back at  Ramsgate.  Pudge is one of only four of the Dunkirk Spritsail  Barges that survive. Pudge is a member of the Association of Dunkirk Little Ships and is entitled to fly the flag of St. George.

And, what of the film star ‘Xylonite’, well, she has recently been put up for sale and is yours for a cool £425,000 fully restored! 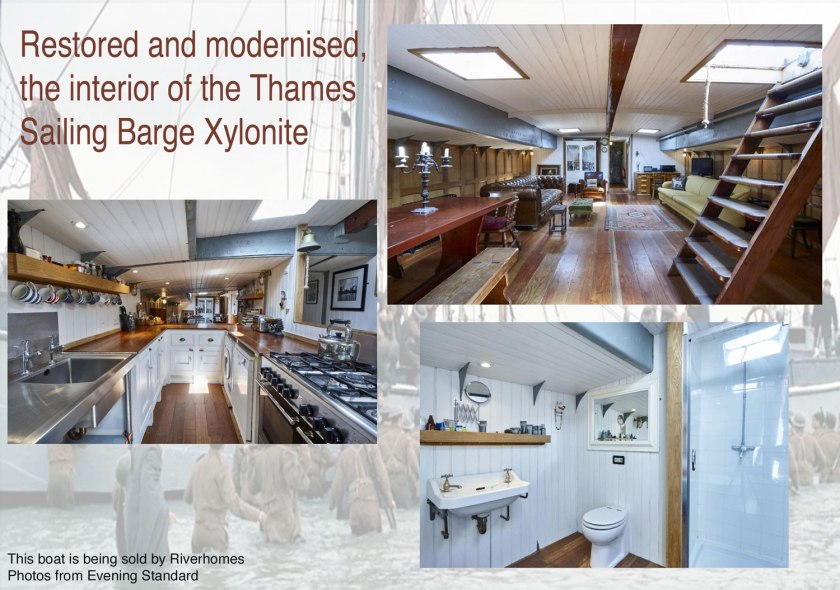 Postscript
Just a thought, but I wondered why none of the original Dunkirk barges ‘Pudge’ , ‘Greta’ or ‘Ena’ were chosen for the film. Perhaps it is because they all have black hulls and it is easier to see and film the khaki uniformed soldiers against the pale bluey grey hull of ‘Xylonite’. And, maybe an aesthetic choice too as naturally the whole film has its own restricted palette of muted blues, greys and sandy colours into which ‘Xylonite’ neatly fits.