Every year my birthday falls near Mother’s Day and occasionally on Mother’s Day itself. I am not usually sent bouquets of flowers as I am not keen on the commercialization of ‘special’ days, but this year with the Covid thing and no visiting allowed I received a bouquet of pink flowers from my daughter.

The beautiful roses arrived as semi opened buds and unusually the bouquet included some white foxgloves in bloom, all of course grown under glass probably in Holland.

Naturally, after about two weeks the flowers gradually began to fade and we arrived at the cut-down stage for some, and the transfer to a different vase stage for others. This transfer trick also included adding a couple of stems of hellebores from my backyard.

Unlike the roses and carnations the hellebores from my garden completely drooped after a single day, but as many of you know these flowers can be seen so much better when cut with a very short stem and placed in a bowl of water. And, I can report one week later the floating blooms are still looking fresh and catching the light as they bob around.

It might be August, just, but it looks as if the weather has decided that that’s it for this summer. I suppose we can still hope for a few bright and balmy days in early autumn.

As a child when we used to come to Suffolk for our family holidays the neighbouring back garden was full of one type of flower – hollyhocks. The entirety of their little plot was hollyhocks. I suspect now that they were mostly self-seeded as it was an open area of free-draining soil and hollyhocks seem to do well in our part of the country. Ever since then hollyhocks have been in my top ten of favourite flowers. Wherever I have been gardening I have tried to squeeze in a few of these essential, cottage garden beauties.

This year I have had pink, white and a very dark, dark red and they have all managed to flower. It is just as well that I took a moment to get some photos of these naturally tall plants before Storm Francis blew in.

Hollyhocks aren’t the only tall flowering plants I’ve grown in my backyard this year. As usual I have grown some cosmos from seed. The packet for this pink variety definitely said ‘dwarf’, but they have grown to over five feet tall, searching for the light. I do think they would have started blooming much earlier and remained dwarf if they had full sunlight all day. As you can see from the almost ‘ethereal’ photo above, the plants only get full sunlight in intermittent bursts. Obviously, this has not been enough and the plants have become etiolated.

At least most of the pink cosmos eventually flowered, but then Storm Francis decided to take down a few plants pulling over the pots at the same time. Luckily, and surprisingly no pots were broken and who doesn’t appreciate having plenty of cut flowers to bring indoors.

It is almost the summer and it is sunny. The temperature here in Suffolk yesterday topped 28 degrees centigrade. Just this last week the fat buds of the climbing David Austin rose, Mortimer Sackler, have burst into their double, pastel pink blooms. You can just see from the photograph below that the rose is planted in the corner of the small, below ground level front garden. The aim is to train it up the south-facing basement wall where most of the blooms will eventually be in full sun. This is its second year and it is coping much better now I have improved the soil with plenty of home compost and organic chicken manure pellets. Last autumn I discovered that the builders had dumped their excess sand and gravel and covered it with a thin layer of top soil, something I should’ve noticed when I originally planted the rose!

Of course, sometimes a gardening error occurs that is not the gardener’s fault. This happened when I bought the clematis ‘Hagley Hybrid’. I specifically bought this variety as my late mother had grown it in the partial shade of a conifer hedge and it flowered amazingly well. Harrumphing and disappointment have ensued. From the photograph below I think you will probably know that this clematis is not ‘Hagley Hybrid’, but is most likely the very popular Nelly Moser.

Now, I wouldn’t have chosen Nelly Moser myself and it really needs full sun to flower well, but as it happens the two-tone pink of the clematis has picked up the two-tones of the pelargonium, so all is not lost.

There are always some positive surprises in the garden and this spring it has been the abundance and the long flowering period of the aquilegias. By chance it appears they’ve had the optimum growing conditions. Notably they have not been swamped by any of the towering foxgloves as they were, very unusually, totally decimated last autumn.

When I first started gardening in the 1990s I often listened on a Sunday afternoon to Gardeners’ Question Time on BBC Radio 4. In those days the late Geoffrey Smith was a regular panel member offering advice and tips. I always remember one tale he told of how the gardener (the husband!) should cut the first, main bloom from each cluster of flowers growing on a floribunda rose, but not dispose of the blooms in the compost. Instead he suggested, in a jocular manner, giving them as a gift to ‘the wife’. Of course, this removal of the central bloom is a type of early pruning to allow the other three buds in the cluster to fully develop and give an overall better display. ‘The wife’ being grateful for the waste prunings was the sly joke and the audience laughed. I mused then and even more now that perhaps it was the ‘husband-gardener’ that needed to be disposed of in the compost.

Finally, wouldn’t it be lovely if ‘smell-o-vision’ was available as the scent from this little bunch of very short-stemmed, prunings is truly delicious and has perfumed the entire basement. 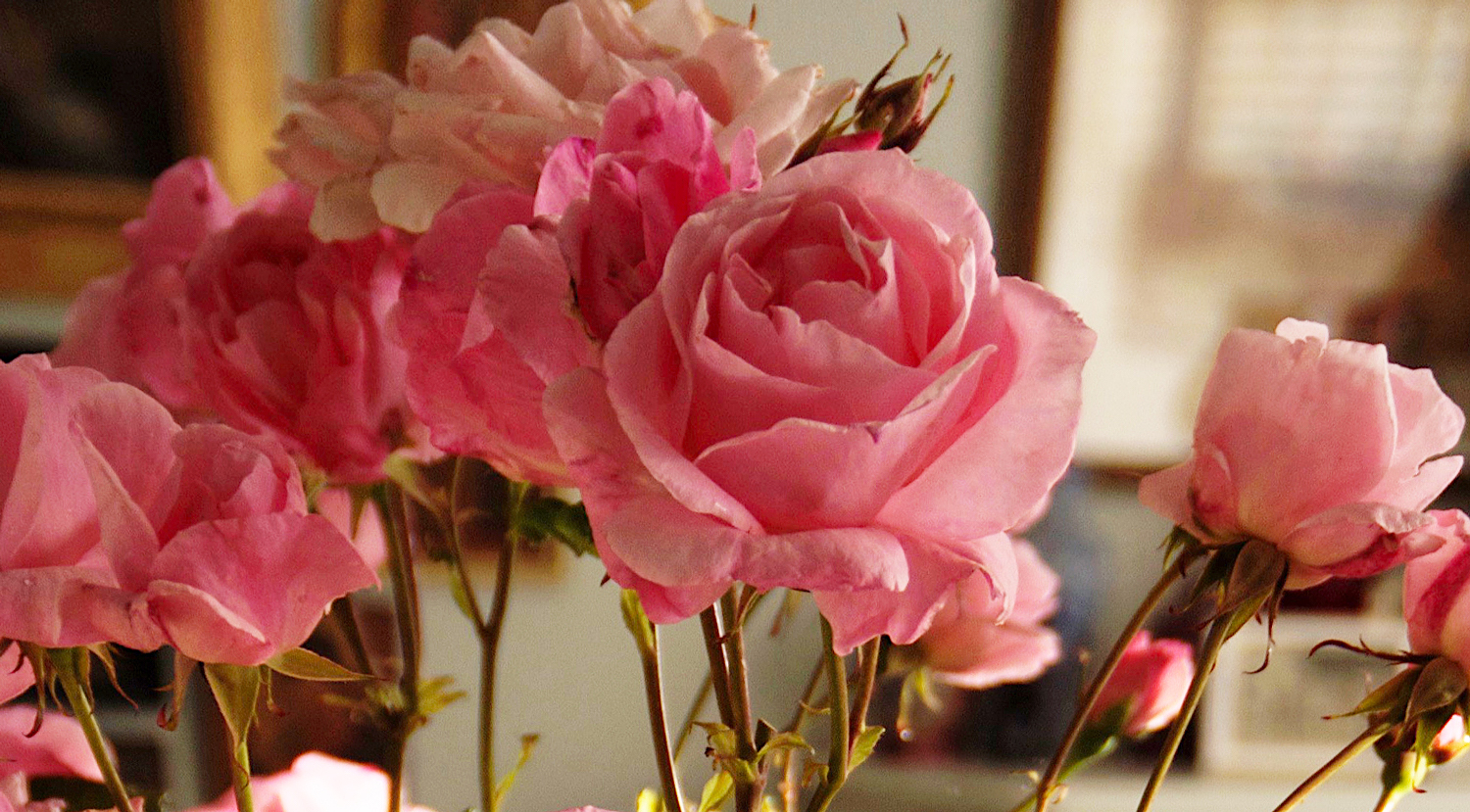 When folk consider flowers for Valentine’s Day, the perennial favourite is the red rose. I think there is something intensely romantic about a single, velvety, dark red rose, but if I were to be receiving a bouquet of roses, I think I would prefer pink roses. 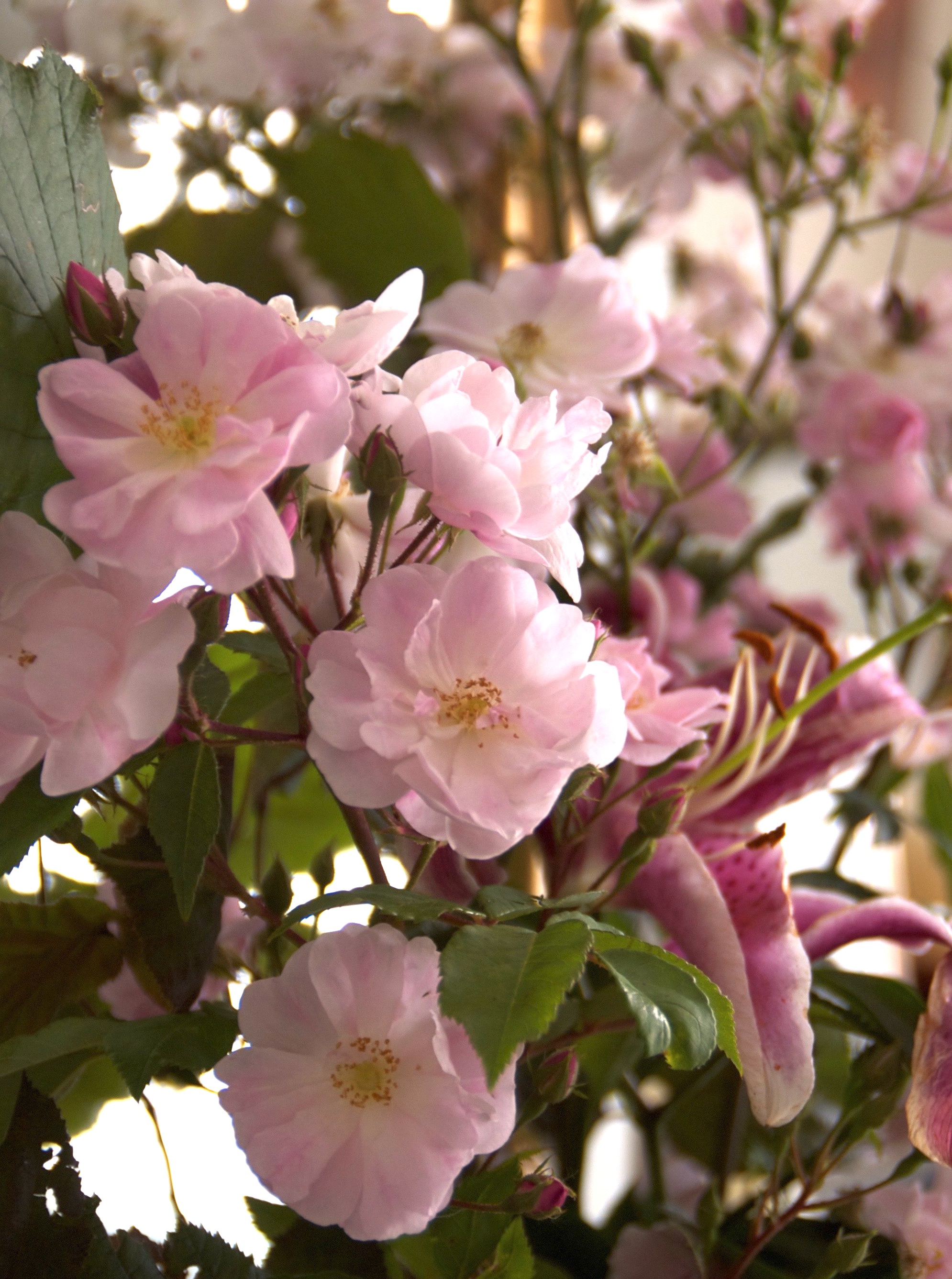 The bonus with giving or receiving roses is many are fragrant too, with most of the old fashioned varieties perfuming a whole room with their beautiful, rich scent. 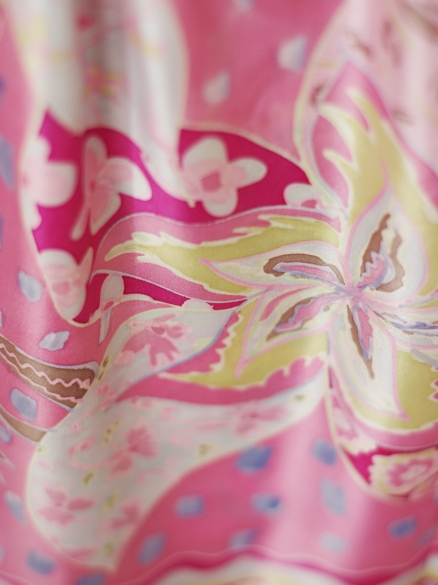 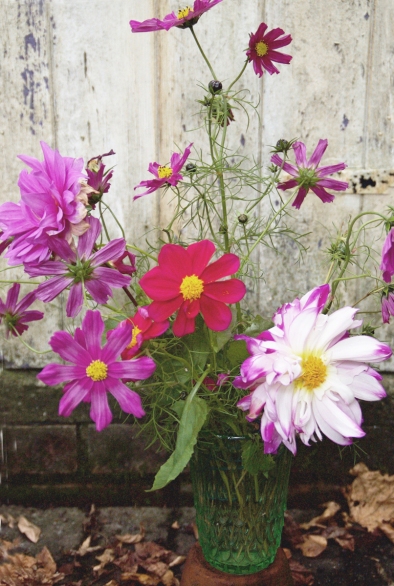 Of course, as you may have already guessed, I don’t just love old fashioned pink roses, but pink blooms in general and find them a great source of inspiration for my flowery silk scarf designs. And with that in mind, here’s a jug of last summer’s dahlias providing just such stimulus! 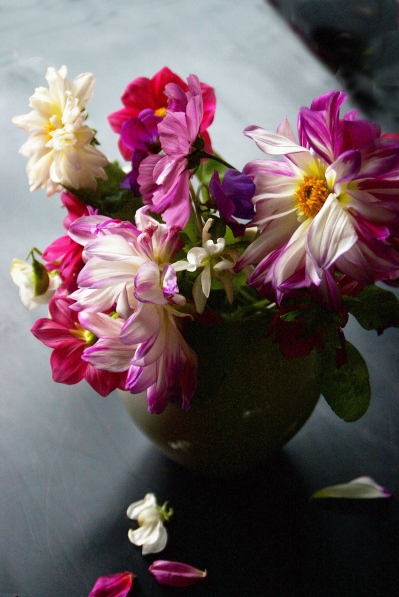 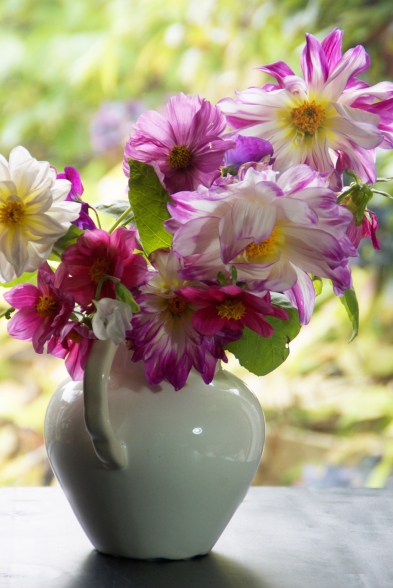 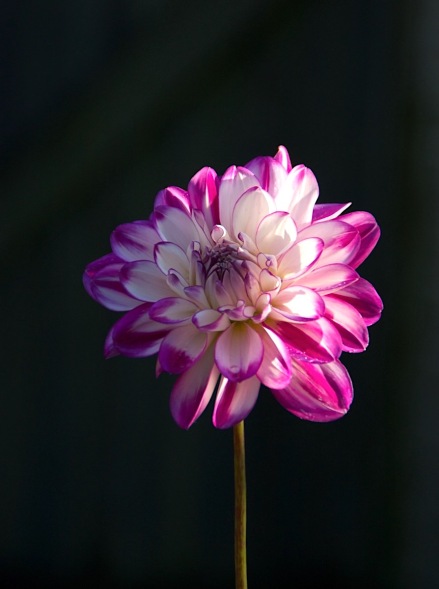 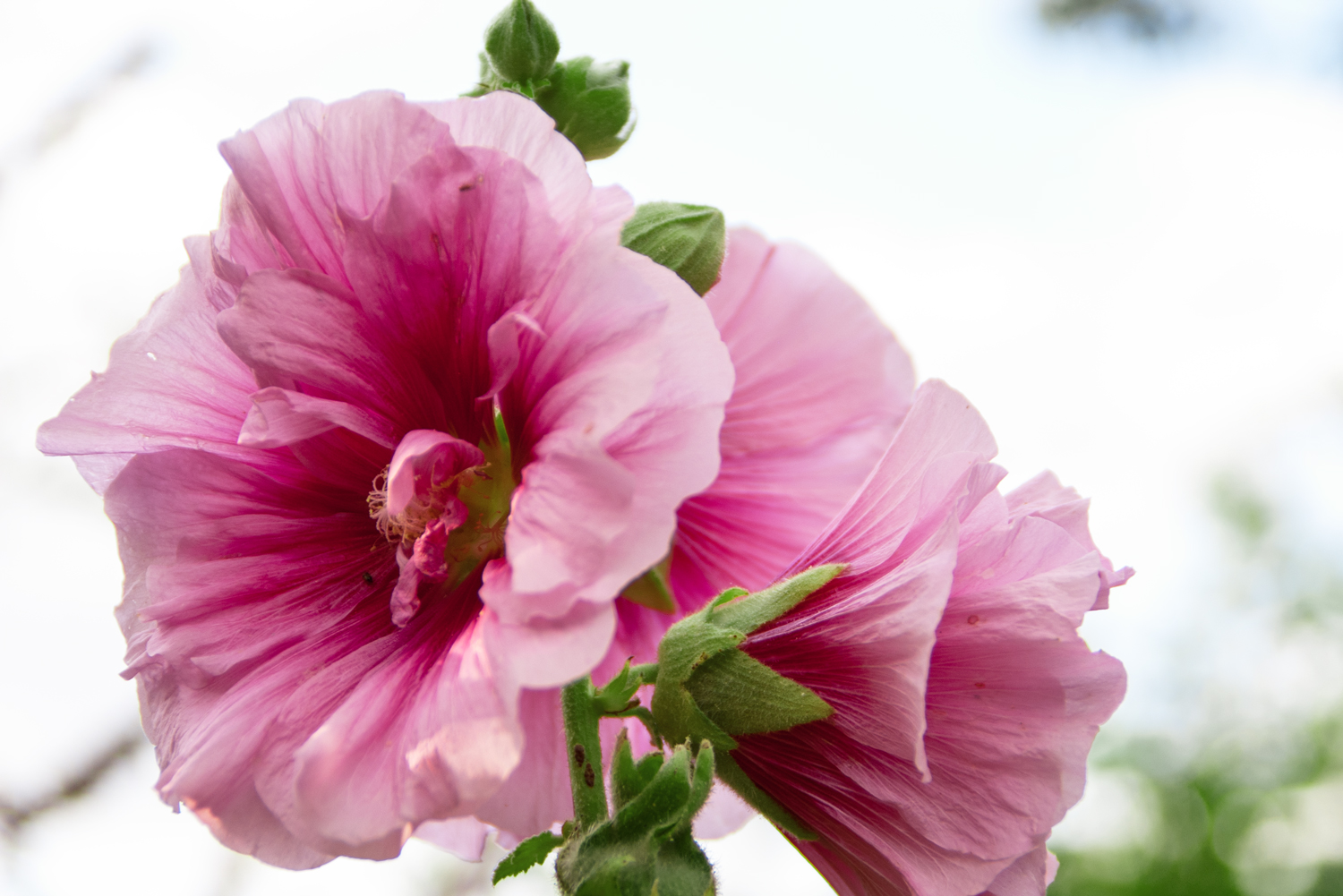 Well, before all the rain and unseasonal drops in temperature, it was that time of year where many gardens across the towns and villages of East Suffolk had plenty of flowering plants in their grounds and many front gardens were adorned by the splendid hollyhock. 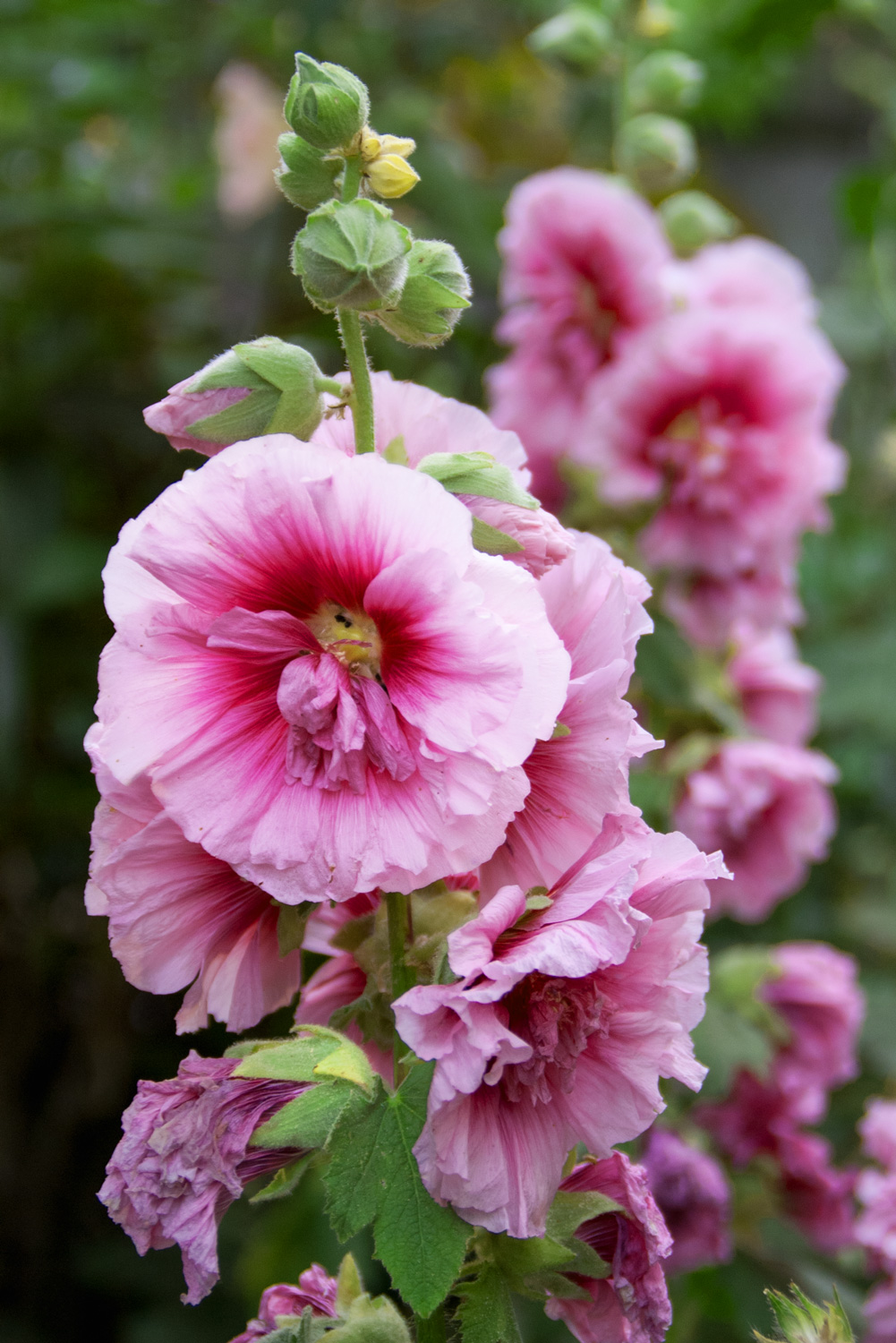 You couldn’t miss cottage gardens decorated with these colourful beauties, often self-seeded, thriving in the local free-draining soil.  This very blousy, double pink hollyhock was attracting plenty of busy bees in the sun between the recent showers. And, then the torrential downpours arrived bringing hard times for both bees and butterflies. Apparently, the jet stream is in the wrong place again!! 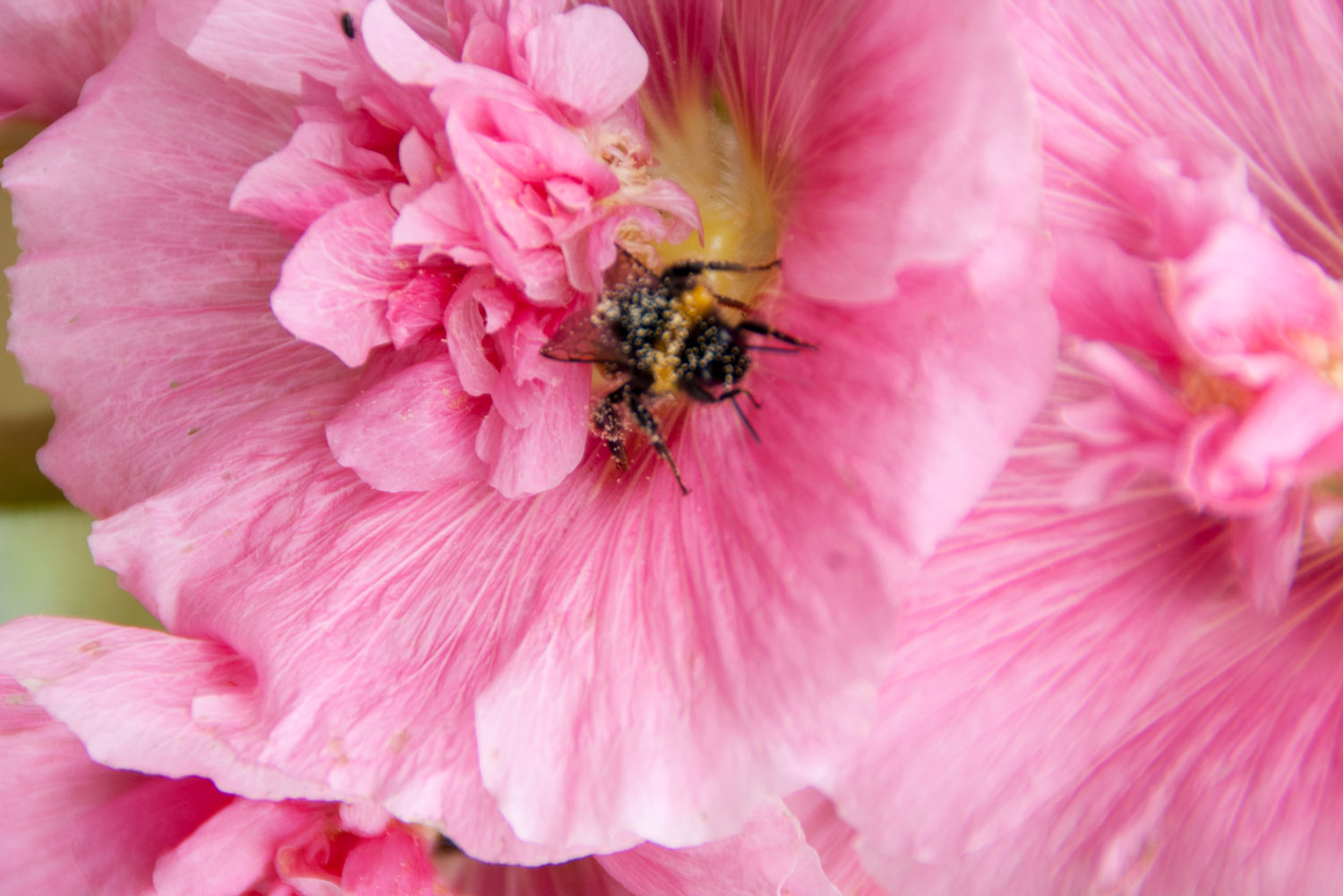 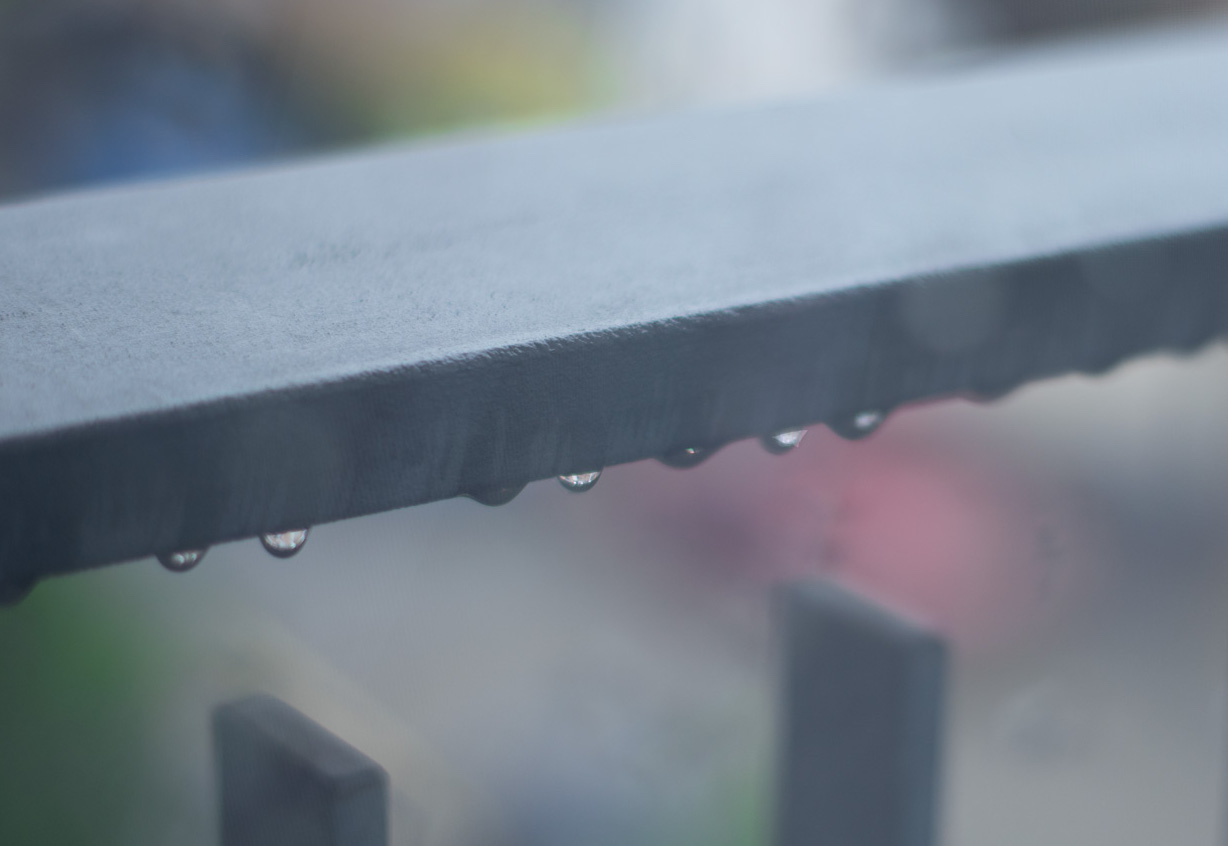 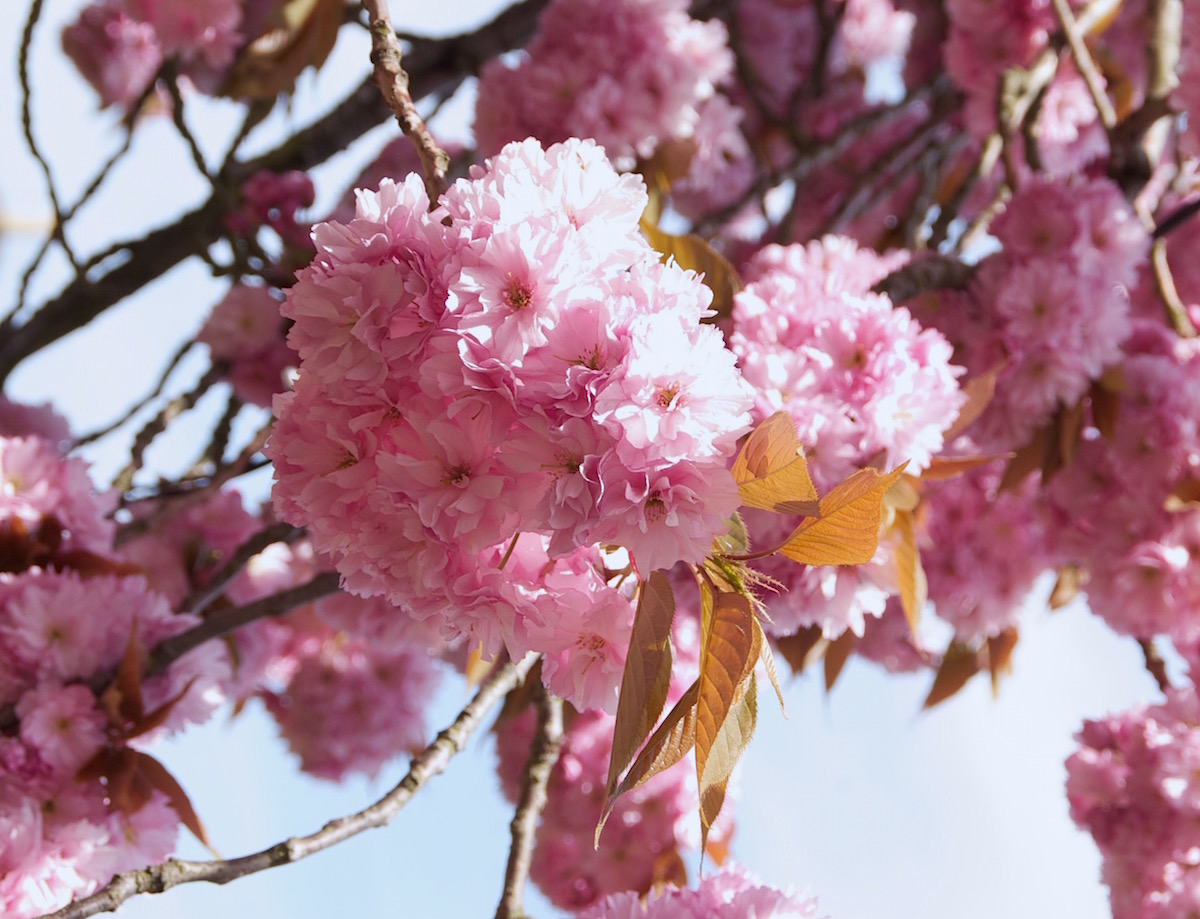 You may have noticed I like pink and I like flowers, so naturally I have painted quite a few scarves inspired by pink flowers. 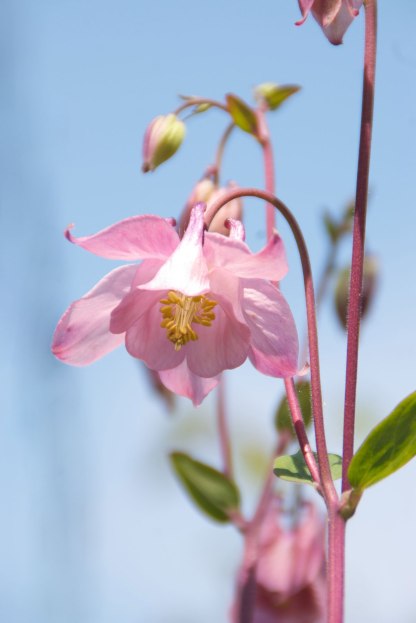 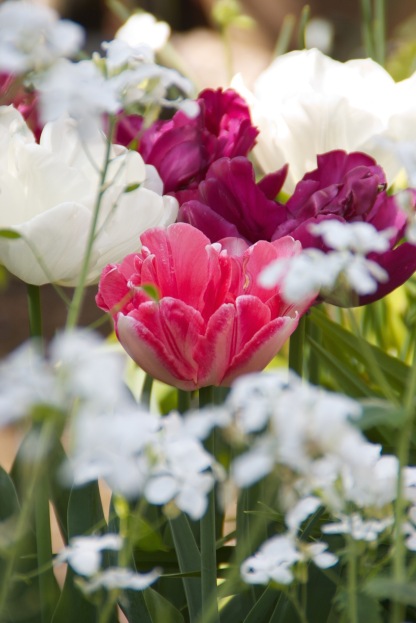 However, sometimes when nature is doing it so well I feel intimidated by her perfection and find myself turning to the manmade for alternative sources of inspiration. 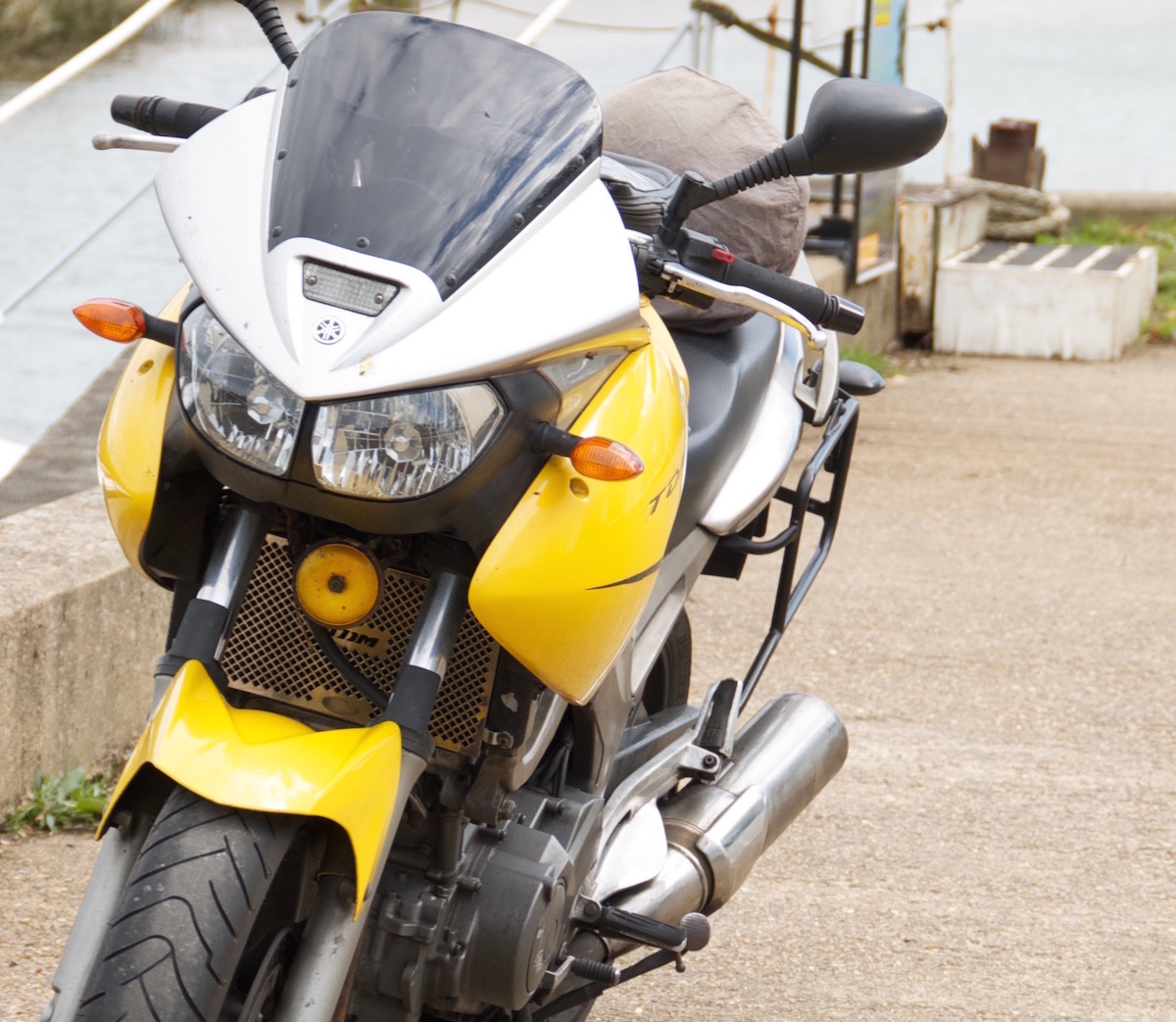 Firstly, I take a photo of an everyday object, remove the distraction of colour, then turn the image upside down to stop myself from recognising the object. The idea is to stop seeing the motor bike and just see shapes. Then using Photoshop I soften and blur the lines to produce a picture that gives an outcome similar to the resultant image we see when we squint. 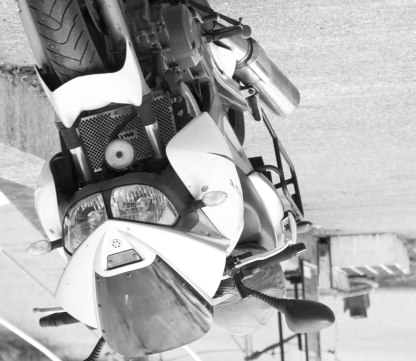 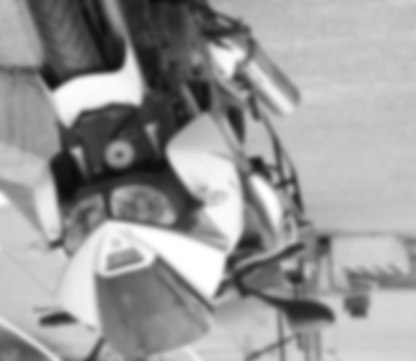 With a little more tweaking I eventually get an image that I can use to work from. 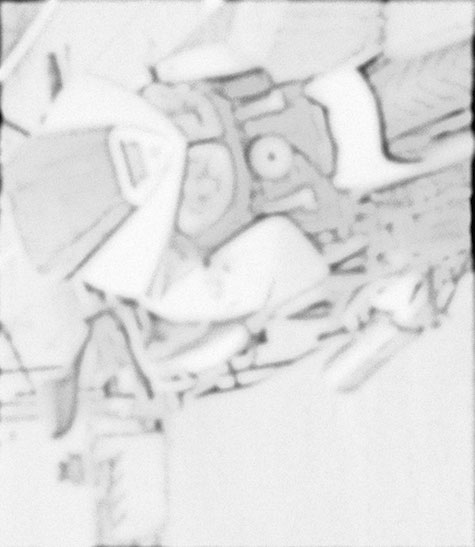 And here’s a little first go, freewheeling in monochrome inspired by a motor bike. 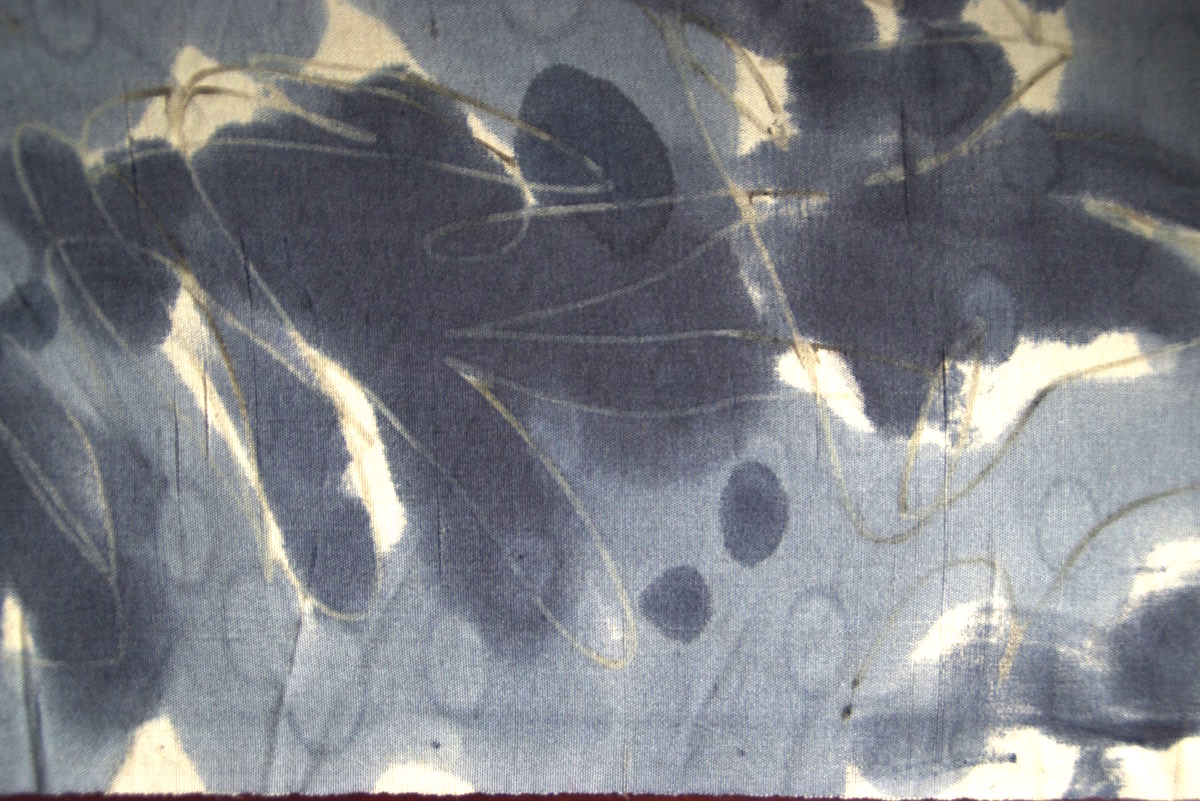 Of course, I’ve used the classic black and white combination before giving a very clear area of contrast. But, wait, I can also see some pink flowers!! 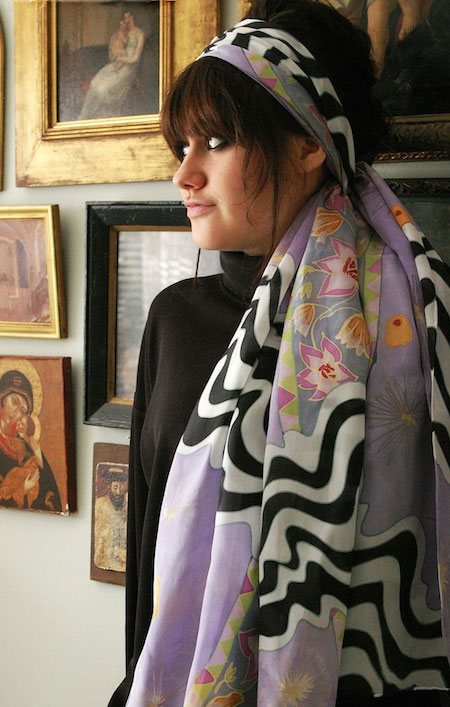 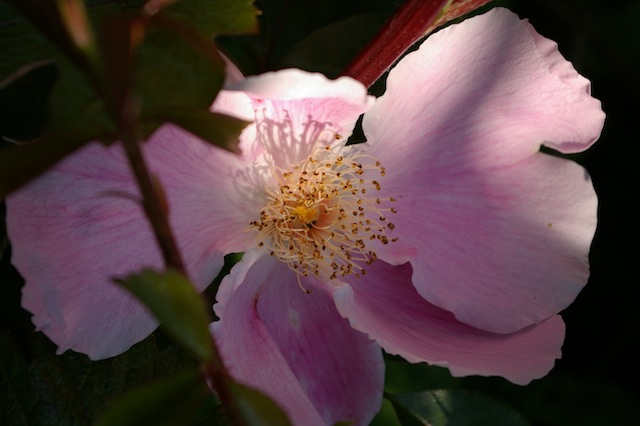 This is one tough and beautiful rose which I bought from Peter Beales Roses when I returned to Norfolk 10 years ago. I think it might be my favourite rose. It is Rosa Anemone, a Hybrid Laevigata. From June onwards it has large, single silver-pink flowers and according to the catalogue has ‘a touch of mauve giving it a vaguely oriental look’. It is quite a thorny rose, but as each open flower is so charming and delicate it’s worth putting up with a few prickles, plus, the single blooms are very popular with bees and other insects.

You can place an order for bare root roses throughout the year, but the rose growers start digging them up and despatching them from this month until March. I like to buy bare root roses because I’ve always received roses with a much better root system than those grown as container specimens. But the main reason I buy bare root from a specialist grower is you get an enormous and varied selection to choose from.

Having recently taken down an overgrown peach tree I’m looking for a small climbing rose, pale to mid-pink that will cope with poor, stony soil and tolerate a little shade. Haven’t made my mind up yet, but it’s always important to remember what else will be flowering near it at the same time. These pink Shirley poppies were out in late June this year so a handful of seeds in the vicinity of a new rose just might be a combination to work towards. 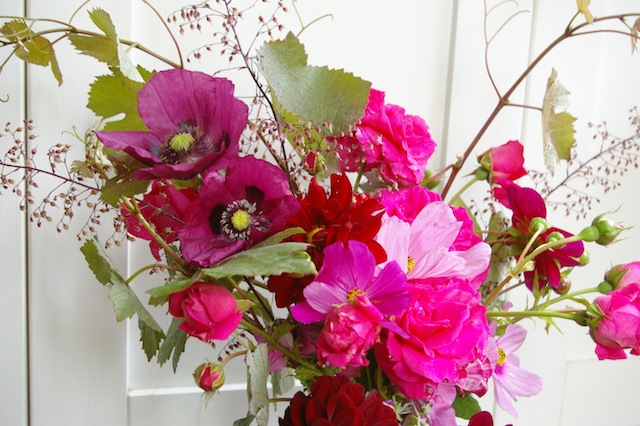 I’m English and therefore ‘the weather’ rules! I have been so fed up with the rain ruining the flowers that as it started to pour again I decided to cut the remaining roses. There will be a second flush from the repeat-flowering varieties and a smattering of blooms from the continuously-flowering, but that’s it for my summer only roses.

Sadly, as daylilies (hemerocallis) live up to their name, flowering for just one day, they aren’t really used as a cut flower. It is a case of appreciating them in the rain and taking a quick photo. 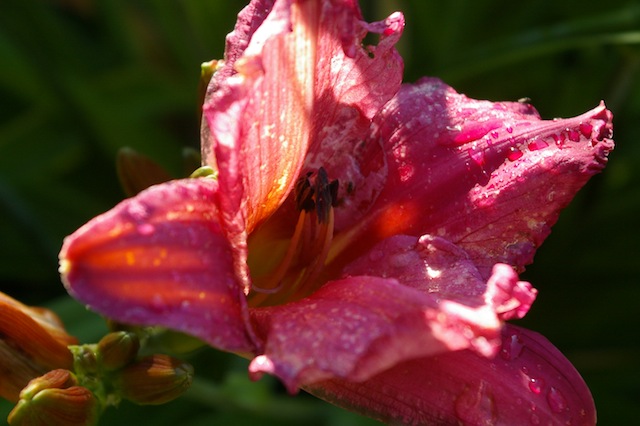 I don’t think I’ve noticed the ‘plant’ year so ahead of itself as it is this year in East Anglia. I heard on the radio that in some parts of the country the cobnuts are already forming nearly a month early. I trotted down the garden and sure enough I spotted some beginning to mature on the tree – well that will be until the squirrels find them! 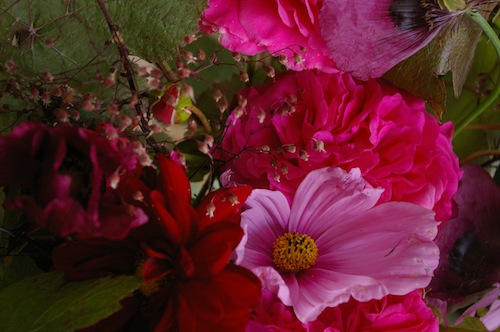