It is over 18 months since the tree surgeon cut down the overgrown ornamental cherry that had been planted too close to the house and also removed two-thirds of the ‘Victorian shrubbery’ of laurels filling my backyard.

With the laurels cleared the residual mess was easier to see and the slow process of sorting and removing other people’s rubbish began. A task that took seven or eight weekends last autumn. I was particularly concerned about some of the unrecognisable lumps and bumps of rubbish that was stuffed into a pair of brimming wheelie bins. It was all rather smelly, but in the end nothing horrific.

Without the pseudo hedge it was obvious that there wasn’t much of a fence in place either and what remained upright was so rotten it would all need replacing. Scroll forward to this year and with a new fence in place I began to dig over the tiny borders. The fencing guys had commented to me that they’d never done a job with so much buried concrete and it seemed to me that with every thrust of the spade I struck another lump of the stuff. It has been hard physical work. It was dispiriting too, as two pieces were so large and deeply embedded I have had to leave them in the ground and simply mark their position. At some point I will either cover with shallow rooted plants or place a pot on top.

Fortunately, over the years I have acquired a number of pots of various sizes which is just as well as there is more cheaply paved patio than plantable ground in this backyard. Over the Easter holiday, during the four days of fine weather, I was able to paint the mismatched fencing all the same colour and plant young climbers to begin to make a garden. It is early days, but a rambling rose, several clematis, jasmine and a fast-growing ceanothus are all in and will eventually cover most of the fencing.

And, there have been blooms. The beautiful perennial oriental poppy ‘Patty’s Plum’, a gift from my sister, has been the first star. These were followed in June by the stately white foxgloves easily grown from the seeds I brought from my last garden.

Finally, with the recent warmth of the July sun the dahlias are coming into flower.

Here is the group of five plants that were in bud at the beginning of June.

Now two weeks of early summer sun and light rain and . . . we now have the foxgloves out. 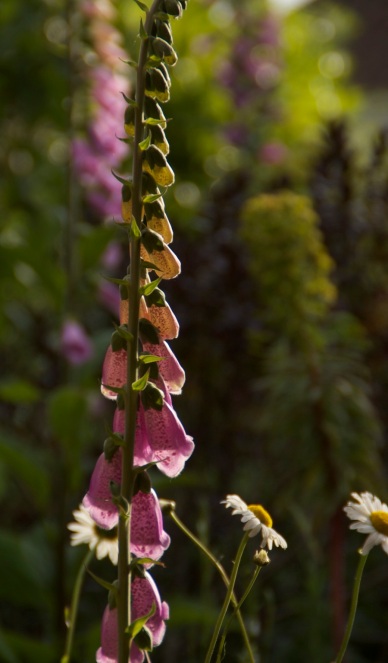 And the Oriental poppies, pink roses and the knautia.

The garden is full of daisies. 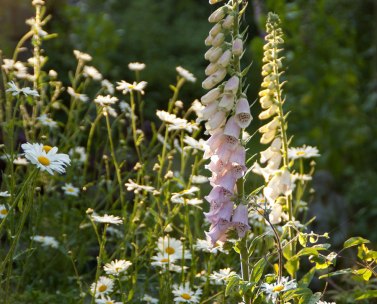 However, we’ve to wait a little for the salvia and then much later for the hollyhocks.

But time is marching on and it’s almost time to start clearing away the euphorbia bracts after all the seeds have popped out.