Last week I posted a piece about my recent visit to the Royal Opera House to see a rather passé production of Verdi’s ‘Rigoletto’. During the interval I recalled that last year my father and I had visited the Casa di Riposo per Musicisti in Milan. Also known as Casa Verdi, this is a home for retired opera singers and musicians, and it was set up by Verdi in 1896. It is also the place where both Verdi and his wife, the opera soprano Giuseppina, are buried. 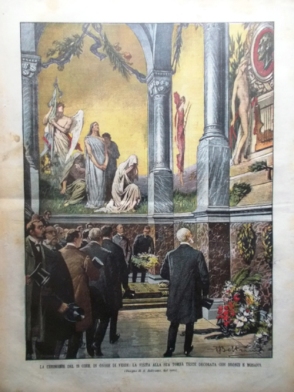 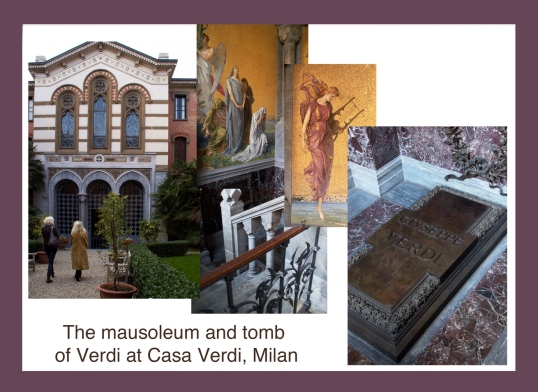 Verdi commissioned this building to be a home for those musical people who, one way or another, had fallen on hard times during their latter years, often occurring when they could no longer perform for a living.

The home was open to residents on 10th October 1902 a couple of years after Verdi’s death and it was supported by bequeathed funds from the royalties received from Verdi’s operas. However, these royalties expired in the 1950s and the home is run now on income from Verdi’s property investments, donations and contributions from the residents. The residents, or guests, as Verdi preferred them to be known, each have their own room and some have views that overlook the inner courtyard, pictured above in the top photograph. The windows are those in the wings to the left and right side of the central complex which contains the communal rooms.

A recent (3 January 2018) social piece in the Financial Times written by Hannah Roberts interviews one of the guests, the 95 year old opera singer, Luisa Mandelli. From the piece I read that the current average age of guests is 89 years old. And, when I visited, we were shown the small but elegant concert hall where the guests could get together either to perform, or to listen to music, and then share musical discussions.

For the guests at Casa Verdi keeping up with their musical interests is seen as very important for maintaining robust cognitive abilities as well as offering a good quality of life. Verdi is recorded as saying that he thought his fame would only last about 30 years after his death. How wrong he was and it isn’t just his wonderful music, but also his thoughtful philanthropy that keeps his memory alive. 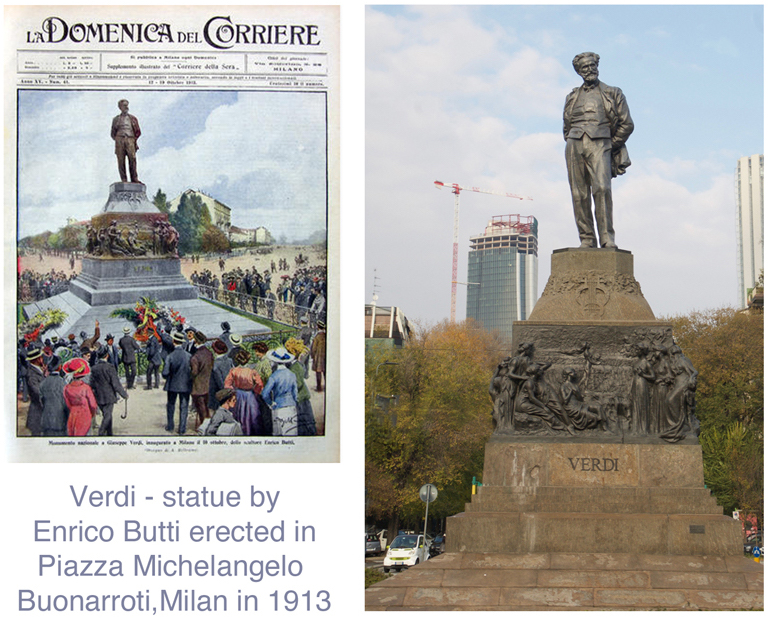 There is an age-old question how do you present a masterful work of art created in the nineteenth century to a contemporary audience. Grand opera, like much of Shakespeare, is often concerned with universal themes of the human condition. Stories of tragic love, betrayal, and death are presented for our entertainment. Verdi’s famous opera Rigoletto is one such example.

For a Christmas treat my father and I recently went to see Rigoletto at the Royal Opera House. This is the David McVicar production first staged in 2001. The staging admirably sets the mood. It is simple, dark and foreboding with much in gloom. Perhaps it is a bit too dark, as I would like to have had brighter pools of lights for the solos and duets so we could actually see the singers’ faces. 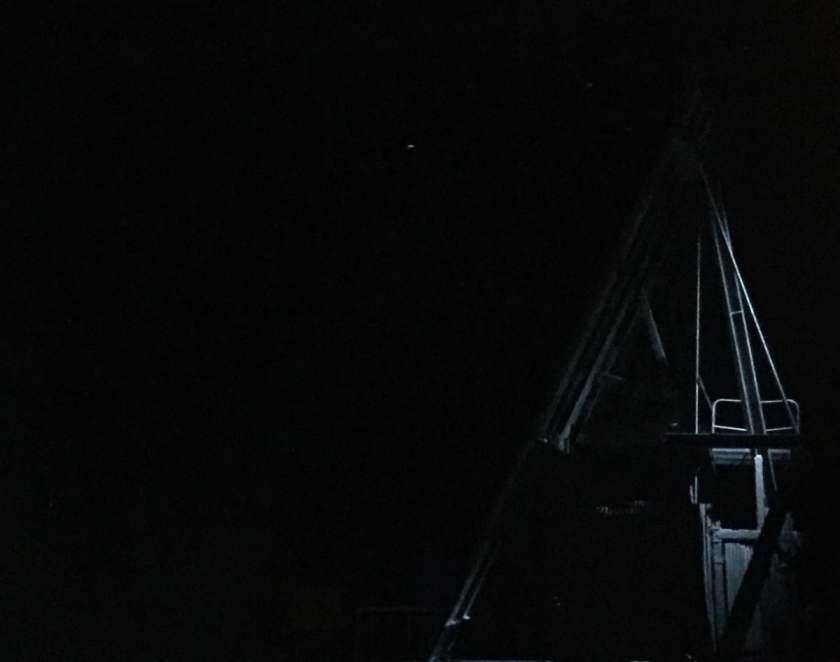 David McVicar’s production is a no holes barred, most deliberately sleazy, with a capital ‘S’, production. Yes, Rigoletto, from the Victor Hugo play, shocked its original nineteenth-century audiences in Italy to the point where it was banned. However, for a twenty-first-century audience we are fine with a probing light illuminating the depravity of absolute power that is displayed by the medieval Duke of Mantua as he exploits his subjects in a virtually lawless manner. We are not, as the nineteenth-century folk were, troubled that their social order would be disturbed by this politically provocative opera.

Nevertheless, this 2001 production is problematic today as far as contemporary gender politics is concerned. As Verdi scored, there are no ‘singing’ parts for the female members of the chorus. In opera terms that means all the women of the chorus are simply littering the stage as objects. In this case to be used and abused, they have no voice, therefore no agency. Despite no collective female singing, there are four solo female parts. These characters appear to stand for the virginal (Rigoletto’s daughter Gilda), the whore (Maddalena), the old nurse/matron (Gilda’s nurse) and the aristocratic lady (Countess Ceprano). I suppose standard females rolls reflecting the nineteenth-century commonly held view of the place of women in society. This is despite the fact the record shows many women worked in factories as well as working as servants, or on the land or in trade. And, working women were also evident during the medieval period in which Rigoletto and indeed this production has been set.

So what can Rigoletto offer its 21st audiences? Verdi wrote it in the music, it is the psychology of humankind; those flesh and blood traits that cross the centuries and with which a modern audience can identify.

Attempting any tweaking sanitization of Verdi’s Rigoletto would be utterly pointless and the wonderful music has so much to convey not least the loving relationship between a father and his cherished daughter as well as all that bravura, dramatic evil. However, in this particular production subtlety is absent. Of course, nobody would want to dismiss a work of art because it reflects the mores of a different time, but I think this nineteenth-century piece could have been given a more reflective interpretation.  Surely, it is time the ROH invited a new director to tackle this magnificent tragic opera with a fresh, more nuanced production.

One very positive aside, was the discovery (well, for me) of a new voice, the young bass Andrea Mastroni, most certainly one to follow in the future. 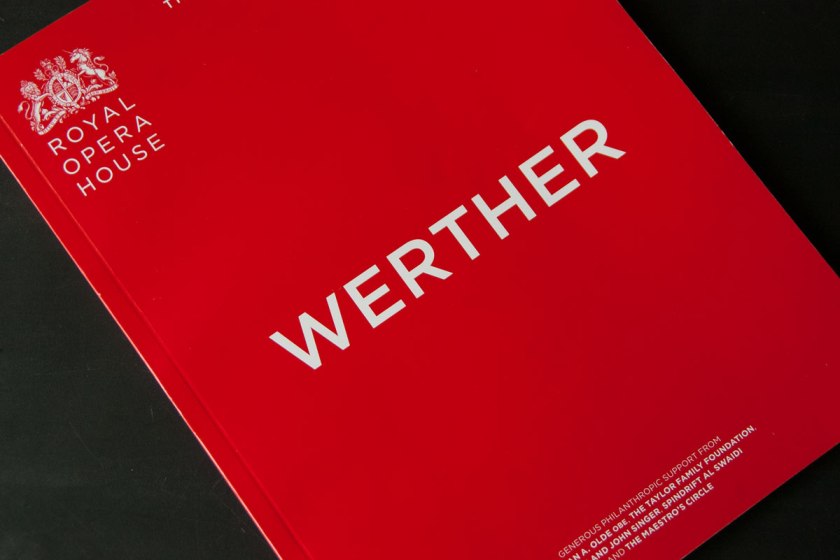 Last week I accompanied my father to see ‘Werther’ at Covent Garden. There’s nothing quite like an evening of intense operatic drama with a suitably tragic ending to provide catharsis during unsettled times.

Massenet’s ‘Werther’ is based on the 18th-century classic of German literature ‘The Sorrows of Young Werther’ by Goethe. The tale was published in 1774 and rapidly became popular across Europe as a book of cultural significance.  It is the story of a young man who lives by his ideals and kills himself for love.

Massenet’s operatic version, sung in French, first premiered over 100 years later in 1892. Notably, in the production I saw last week in London, Werther was the Italian tenor Vittorio Grigòlo, Charlotte was the American mezzo soprano Joyce DiDonato, Albert was the Serbian baritone David Bižić and Sophie the American soprano Heather Engebretson. The performance was conducted by the Royal Opera’s Music Director the British-Italian Antonio Pappano. Other members of the cast were from Holland, Switzerland, Ukraine and Australia. The international buzz continued across the audience. I heard Spanish, Italian and American voices and I was sat next to a German couple who spoke brilliant English. It was a positive microcosm – no pathetic threats here of sending people back!

The music was superb and the orchestra was in fine, truly dynamic form as it played to the masterly conducting and interpretation of Antonio Pappano. I’m no expert on French late-nineteenth-century opera, but I found this production riveting, gleefully wallowing in the emotional agitation with the musical tension escalating as the drama intensified. The acting of both DiDonato and Grigòlo was engrossing as they sang with fire and passion. It is a while since I’ve seen a live performance with the tingle factor, but the desperate, hopeless pain of Act 3 sent shivers down my spine more than once. Their singing was not perfection, but who’s complaining when it was so expressive and heart-wrenching. Frequently there’s something lacking in ‘perfect/multiple take’ studio recordings compared to experiencing the vibrancy of live performances.

And, as for the production, quite brilliant. The staging and lighting matched the progressively darkening mood of the opera moving from a brilliant blue summer, to a gloomy interior to a black winter night with falling snow. Act 4 was visually thrilling too as the distant attic room (shown above) slowly moved from the depths of the stage to the very front, mystically gliding towards us within a night of falling snow as the orchestra played ‘The Night before Christmas’.

At the end of this harrowing tragedy the two stars looked emotionally drained, but fortunately were revived by the rapturous applause they received.

And, finally the conductor left the orchestra pit and came on stage. Bravo, bravo.

Did I mention I loved this?
I wish I could go again.