Skip to content
Mary Tudor was the fifth child of seven born to King Henry VII and his wife Elizabeth of York. Mary Tudor’s first marriage was to King Louis XII of France and she was his third wife.

Mottled and faded print of a copy of an oil painted for King Louis XII. Attributed to Jean Perréal c. 1514

Print of a Victorian copy of an oil of the Duke and Duchess of Suffolk. Original oil possibly by Jan Gossaert c. 1516

These two pictures were displayed near Mary’s tomb. The image on the left is Mary Tudor (c.1514) painted for Louis XII. The original is attributed to Jean Perréal of Paris, Royal Painter at the French Court. The portrait was painted before Mary left England for France. The image on the right is a copy from a portrait of Mary (c.1516) painted with her husband the Duke of Suffolk. The original oil is attributed to Jan Gossaert.

The marriage to the King of France only lasted two years and upon the death of Louis, Mary scandalously married Charles Brandon, the Duke of Suffolk, in a secret ceremony in Paris. 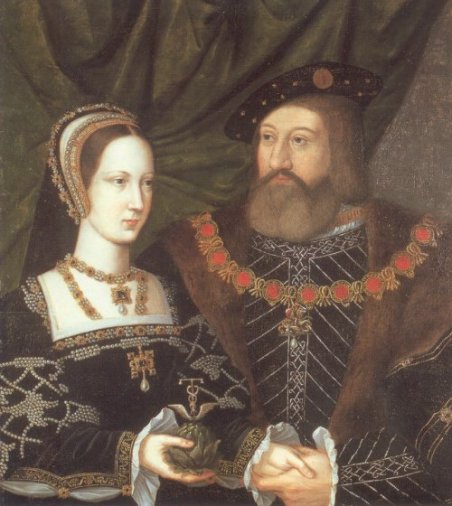 The Duke and Duchess of Suffolk. Attributed to Jan Gossaert. c. 1516 The Woburn version.

The Duke and Duchess of Suffolk. Attributed to Jan Gossaert. c. 1516 The Lincolnshire version.

It was a secret wedding as the couple had not gained approval from the English King Henry VIII, her brother. For a royal sister to marry without permission was considered treason and both Mary and Charles could have been executed. Fortunately, following a defence of their marriage by senior advisers such as Cardinal Wolsey, the King decided to level a large fine instead. The Duke and Duchess were then formally married in public at Greenwich Hall in London.

Mary Tudor may have been a King’s sister and a King’s wife, but as the Duchess of Suffolk she was buried in the Abbey at Bury St Edmund’s in Suffolk. It is possible she had a stone tomb within the Abbey in the Tudor style, but following the Dissolution of the Monasteries the Abbey was spoiled and she was reburied in St Mary’s Parish Church. A space next to the altar, as her royal rank dictates, is marked as her resting place, but without a formal funereal structure.

These plaques hang above the area of Mary’s tomb.

Sacred to the Memory of Mary Tudor, Third Daugther of Henry the 7th King of England, and Queen of France; Who was first married in 1514 to Lewis the 12th King of France, and afterwards in 1517, to Charles Brandon Duke of Suffolk. She died in His Life Time in 1533, at the Manor of Westhorp in this County and was interred in the same Year in the Monastery of St Edmund’s Bury, and was removed into this Church, after the Dissolution of the Abbey.

Interestingly, the aristocratic, but not royal Charles Brandon, Duke of Suffolk, is buried in St George’s Chapel, Windsor Castle.