For anyone seriously interested in exquisite fifteenth-century stained glass then Long Melford in Suffolk is well worth a visit.

Finished in 1484 the Great Church of the Holy Trinity contains a collection of some of the finest medieval glass in the country including a Lily Crucifix image and a rare roundel featuring a three hares motif. 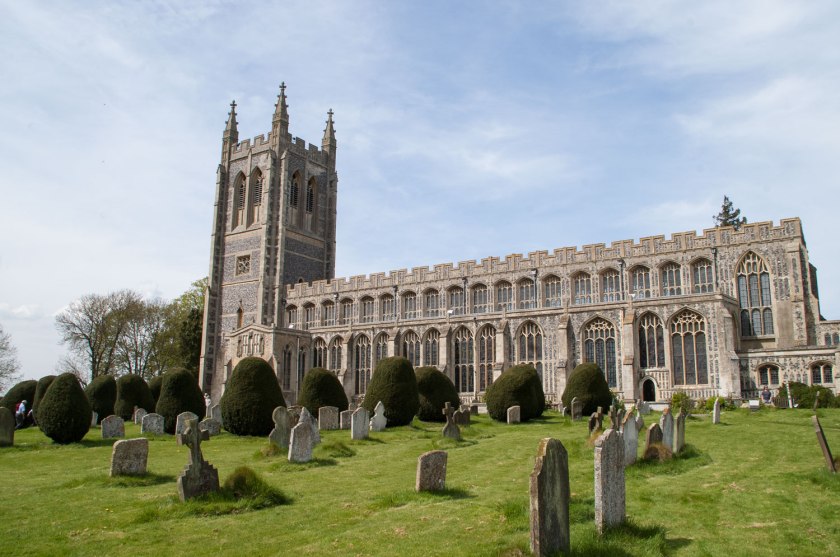 Holy Trinity is one of Suffolk’s so-called ‘Wool churches’ as the erection of these buildings was funded from the profits of the medieval wool-trade. Advantaged Suffolk landowners prospered from the successful export of high quality wool and wool cloth to continental Europe and invested their profits building fine churches in the hope of facilitating a speedy journey for their soul through purgatory to heaven.

The medieval glass we see today filling the large ground floor windows features portraits of donors. These portraits would originally have glazed the upper, smaller, clerestory windows. For about 100 years during the 19th century some of this glass was used to reglaze the east window (1828) with more being installed in the west windows during 1862/3, however today these windows are clear. The present arrangement of the medieval glass, all along the north aisle, was carried out during the late 1940s. 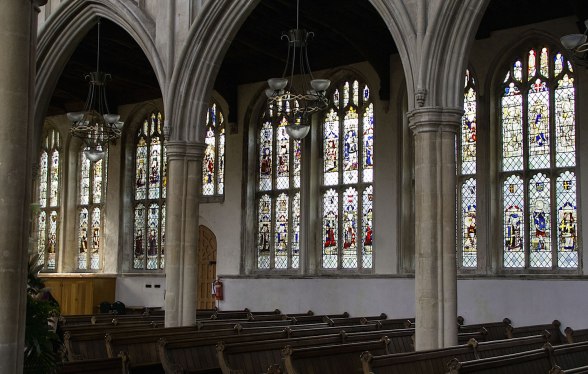 The height of these lofty clerestory windows helped protect the glass from the various destructive onslaughts that occurred during the 16th and 17th centuries. The lost/destroyed stained glass would have consisted of biblical images and religious themes popular in the medieval period and similar to those of the Victorian glass found in the south aisle windows today.

In the medieval period clerestory windows were filled with a variety of images from Old Testament prophets and local church dignitaries to ethereal representations of angels and archangels. Amongst the many surviving medieval donor portraits (to be explored in a separate post) there are two archangels. 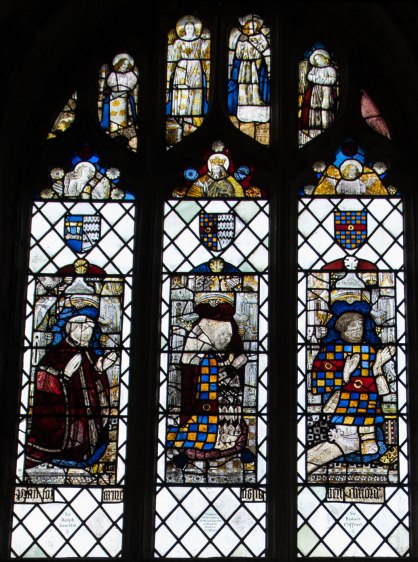 Here, at Holy Trinity it is the archangels St Gabriel and St Raphael that have survived. They are both exquisitely painted displaying subtle and detailed work using silver nitrate stain. They have been painted by a craftsman that understood how to use the translucent quality of his materials to achieve an unearthly quality, literally letting the spirit/light shine through.

There is another little gem hidden away in the Clopton Chantry Chapel. One of only five examples in England, the east window of the chapel bears a ‘Lily Crucifix’ dated from 1350. Christ is not on the Cross, but is instead crucified on white lilies. The blue background and the white lily represent the Virgin Mary and the motif symbolises the joint suffering of Mary and Jesus.

Finally, an unusual and rare three hares roundel has been placed above the north door. This motif is believed to have come to Europe from perhaps as far away as China via the Silk Road. If you look carefully you can see that although there are only three ears each of the three hares has two ears! 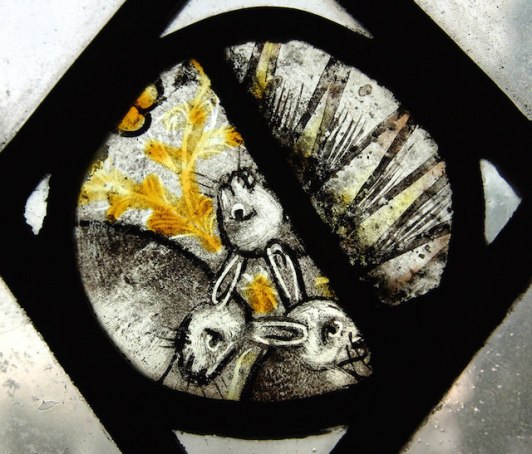