Not really sure how the suits categorise films nor how they arrive at release dates, but ‘Her’ was released in the UK on Valentine’s Day and billed as a romcom starring Joaquin Phoenix. Set in the near future the film is more of a science fiction dystopia and actually falls far more naturally into a category that Margaret Atwood (The Handmaid’s Tale) calls ‘speculative fiction’. But, romcom? – I must be living on another planet. The film is amusing in parts, but overall the content is deeply depressing concerning itself with the inability of individuals to make lasting and meaningful relationships. ‘Her’ is more of an antidote to Valentine’s Day. However, it is quite beautiful to look at. For once, the ‘urban’ future is not grey, dingy and underlit. If anything, the outside shots have a bleached quality and the interiors are creams, fawns and browns punctuated with orange accents. 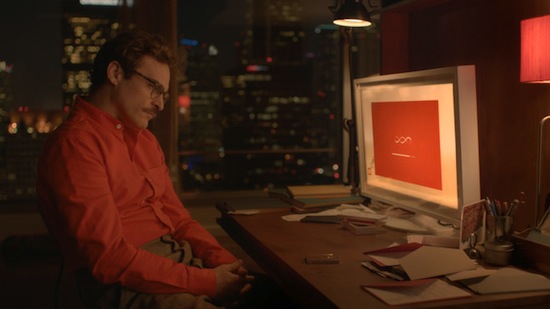 Perhaps this warm palette (even Phoenix’s usually dark brown hair has been softened to a lighter, ginger brown) was chosen to contrast with or heighten the desperate and bleak story. The urban vistas of the near future (apparently mostly contemporary Shanghai) look shimmering and fascinating, but the lives of the people in the film were introverted and self-obsessed. The characters are only interested in themselves to such an extent it is hardly surprising that Theodore (Joaquin Phoenix) is unable to sustain a relationship with a real woman and instead finds love with a computer ‘operating system’, who names herself Samantha.

The story is a bit like Pygmalion, but instead of the sculptor falling in love with his own crafted work, Samantha is an evolving computer program who moulds herself to Theodore’s needs. This is the point where I think – ‘what would this film be like if the lead were a female and a male OS adapted to suit her?’ Although, visually the total opposite to ‘Blade Runner’ (dark and very wet), ‘Her’ is on that continuum of films touching on the relationship between artificial intelligence and what it is to be human. Watching these creepy characters suggests humanity doesn’t have a rosy future. 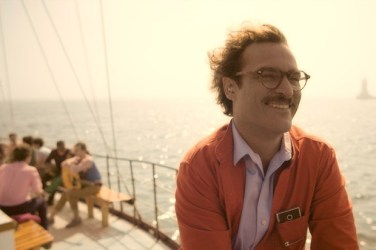 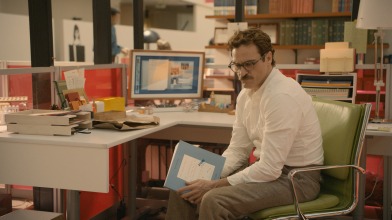 I don’t want to give away the ending and, of course, a dramatic creation is working on several levels, but as the film progresses we see Theodore’s colourful clothing gradually change. If you’ve seen the main film poster it is red – almost totally red – with Theodore wearing a red shirt. During the course of the film he is shown wearing red, then oranges and tans, then pale orange and soft peach and finally at the end a white shirt. Maybe, I’ve read this all wrong, but Spike Jonze (writer and director) looks like he has experienced a few female bloodsuckers in the past!