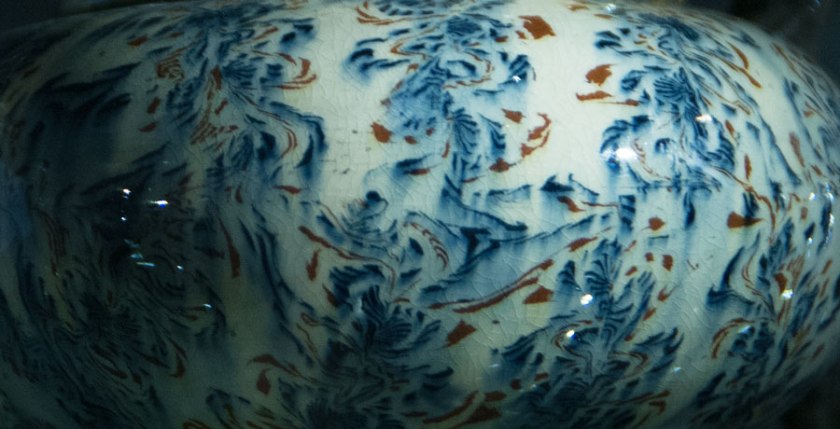 Tea and teapots came to Britain from China in the middle of the 17th century. The teapots were made either of hard red stoneware or white porcelain and were extremely expensive, but by the 1690s enterprising English potters were producing more affordable copies. In Staffordshire, David and John Elers made unglazed red stoneware from local red clay.

These ‘red’ teapots were imitations of the Chinese teapots from the province of Yixing.

Gradually tea drinking spread from the fashionable and rich to the fashionable and aspirational. Aspirational individuals were those who wanted to emulate the habits of the gentry, including their new and elaborate social ritual of tea-drinking. Demand for teawares increased, both imported from China and locally manufactured in England, giving the Staffordshire Potteries a huge boost as the area began to industrialize in the early eighteenth century. Enterprising potters developed their own range of decorative effects as they attempted to copy Chinese porcelain.

This salt-glazed stoneware teapot has been painted in imitation of Chinese ‘famille rose’ porcelain.   The term ‘famille rose’ describes a popular style of decoration used on porcelain produced in China in the 18th century for the Western market. The style was characterised by soft colours, particularly rose pink. Shells were a common decorative motif in the mid-18th century and several different models of shell teapots were produced by the creative Staffordshire potters at this time.

More innovative new glazes were also developed that mimicked precious stones such as agate (shown in this teapot below). The unnamed Staffordshire potter who made this teapot has also added a Buddhist lion knob to the lid to enhance its Oriental appeal.

It wasn’t just the glazing and surface decoration of teapots that saw extensive innovation, as during the middle of the 18th century the first novelty teapots were introduced. Factories had responded to widening markets and pushed developments in materials and techniques allowing production of moulded as opposed to thrown teapots such as this sitting camel teapot.

This teapot is made in white salt-glazed stoneware and is modelled as a sitting camel, with its legs tucked under its body. It has been made using the slip casting technique. Slip casting using moulds had actually been invented 50 years previously by David and John Elers, but was revived to allow the manufacture of complex and highly irregular shapes in bulk. Slip casting involved thinning white clays mixed with calcined flint to a viscous liquid that was poured into hollow plaster moulds. These moulds were made by specialist craftsmen. Enough Staffordshire slip-cast camel teapots have survived that they are not all sitting on the shelves of museums – you can still buy one from an antique dealer or auction house if you have a spare £5000!

Of course, in the mid-18th century more ordinary folk might have saved up to buy a less glamorous teapot perhaps one similar to this orange-brown earthenware example. It would have cost a shilling, equivalent to about £70 today. Teapots like this one were mass-produced and sold through ‘Staffordshire Warehouses’.  These shops had opened across the country in most major towns and cities selling teawares to meet the demand for this newly acquired social pastime – ‘tea-drinking’.