Let’s start with a point that I am sure we’d all agree with, a movie is not real life, and, however much we suspend our disbelief when watching a film, deep down we know we are watching a fiction. Now let’s consider musicals. Loosely, that is films where, at the drop of a hat, characters move from speaking to singing and dancing to tell the story. Now, here, we are in no doubt that we are watching a fiction. Some folk like musicals, some do not. Oddly, for some time there has been this strange situation that ‘the Hollywood musical’ has been viewed as passé and naff yet musical theatre in the West End (London), on Broadway and around the world, has been extremely popular. Apparently, if you believe all the hype, change is coming. The latest Hollywood musical ‘La La Land’ is going to make screen musicals popular again.

Written and directed by the youthful, Damien Chazelle, ‘La La Land’ presents a 21st century musical version of the Hollywood dream scenario. It opens with an energetic, fast-paced, one-take, song and dance routine in the midst of an LA traffic jam. Then the focus tightens and we are introduced to Seb and Mia, played by Ryan Gosling and Emma Stone (two major Hollywood stars), who will then sing, dance, play the piano and act out their tale for us.

A musical is fiction in capitals. Now, with that in mind, and taking into account that there are sequences of true flights of fantasy in this film, was it too much to ask that the two leads could actually sing and dance! I am a huge fan of Ryan Gosling, but honestly he can’t sing. It is really impressive that he learnt to play the featured piano pieces for the film but this ‘jazz’ playing must have had true jazz aficionados stuffing their fingers in their ears. I understand that Damien Chazelle is passionate about the old musicals (The Umbrellas of Cherbourg as well as the big Hollywood hits, Singing in the Rain, et al) so why wouldn’t he celebrate the essence of ‘the musical’ which is the music, the singing and the dancing. I’ve heard well-known film critics explain that using stars that aren’t tiptop song and dance people gives an authentic feel to their performances. Mmmm, really? – I just feel so sad for all the young, talented musical theatre trained performers, wannabe film stars, grinding their teeth as they watch this.

However, I admit, I seem to be in a very small minority on this one. I was not impressed. All the knowing, clever, referential ‘homage to the great musical’ fell rather flat for me when the film’s leads turned out to be musical lightweights. What is the point of a musical if the stars can’t carry it (or a tune!)? I’ve heard and read plenty of reviews of this movie and cannot for the life of me understand what’s going on. Is this a postmodern and then post-ironic musical? One reviewer went as far as noting that there is ‘the charm of amateur singers’!! 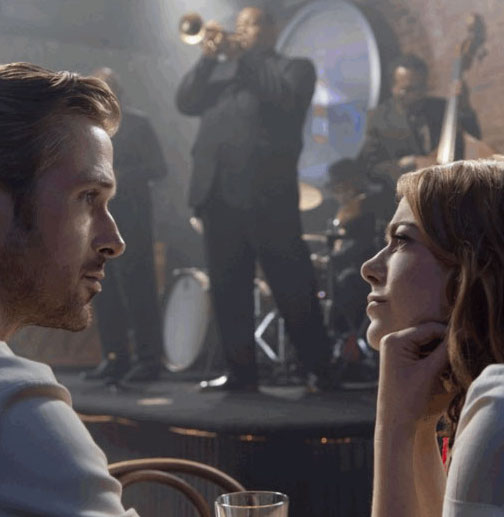 I think we are living in unnerving and challenging times at the moment and people are looking for ‘warm glow’ escapism. I went to a Monday afternoon, big screen showing with a fair sized audience and there was a palpable feeling of disappointment at the end of this film.

I wrote the above on Monday evening and originally concluded my mutterings with “Something just didn’t feel right about it for me.”

Since then I’ve read these two, interesting and powerful, slightly less mainstream articles . . .

‘The Unbearable Whiteness of La La Land’ by Geoff Nelson