Of course, the outstanding exhibit at Oxburgh Hall is the needlework hangings embroidered by Mary Queen of Scots, Bess Hardwick (Elizabeth, Countess of Shrewsbury) and their ladies-in-waiting between 1569 and 1584.  These hangings were NOT actually sewn at Oxburgh Hall, but arrived some time in the 18th century along with Mary Browne of Cowdray Park, a wife for the 4th Baronet, Sir Richard Bedingfeld.

These embroidered panels are a visual and cultural expression of Mary’s time spent during her imprisonment by Queen Elizabeth 1. As such these embroideries are of a wider historical interest and significance than any part of the fabric of Oxburgh Hall or any other content of the hall, but, sadly, sewing is not such a crowd puller as a moat!

In March 1569, three months into Mary’s stay/incarceration with the Earl of Shrewsbury and his wife, Shrewsbury wrote of Mary

‘This Queen continueth daily to resort to my wife’s chamber where with the Lady Lewiston (Livingston) and the Mrs (Mary) Seton she useth to sit working with the needle in which she much delighteth and in devisisng works.’

From this we learn that both Mary and Bess worked together in the design as well as the execution of the embroideries. Many of the designs have motifs and Latin mottos taken from emblem books that were popular across Europe during the middle of the 16th century. It appears inspiration was taken from woodcuts printed in a selection of natural history books including ‘Icones Animalium’ by Conrad Gessner (1560), ‘Devises héroïques’ by Claud Paradin (1557) and ‘La Nature et Diversité des Poissons’ by Pierre Belon (1555).

Designs were drawn onto linen canvas and then embroidered. Coloured silks, silver thread and silver-gilt thread were used, employing both cross-stitch and tent-stitch, to create the finished pieces. 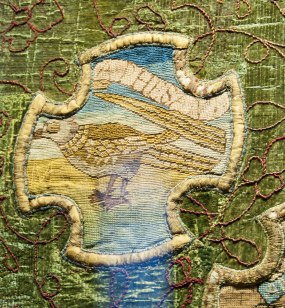 The present arrangement of embroideries at Oxburgh, mounted on green velvet, is believed to have been made sometime in the 18th century to create the three hangings. They are called the Marian Hanging (after Mary, Queen of Scots), the Shrewsbury Hanging (after Bess Hardwick) and the Cavendish Hanging (after Mary Cavendish, Bess’s youngest daughter). Individually, each embroidered panel may originally have been used for cushions and were sometimes given as gifts.

Some of the designs have hidden meanings for the imprisoned Queen, such as the despair of the yellow rose eaten by ‘canker’ (bottom right-hand corner of the Marian hanging but, sadly, it was too dark for me to get a photo in focus without a tripod!). Quite a few different birds are featured. They make interesting shapes to embroider, but, also, of course, a bird can always take to the sky, fly away, escape. 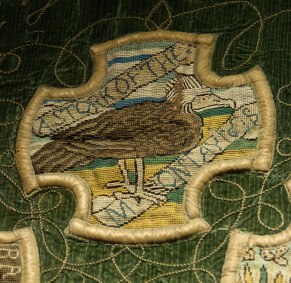 Not all the designs featured birds and animals from the wild. A few panels show domesticated animals and farm activities.

Whilst one or two panels depict mythical beasts in all their intricate glamour such as this cockatrice.

This is only a small selection of all the beautifully embroidered panels. The hangings are in a small room with restricted lighting, but they do look so much better in real life than in photos. Well worth a visit.