Oxburgh Hall is a moated manor house in the depths of rural Norfolk. It has been ‘owned’ by the National Trust since it was donated by the Bedingfeld family in 1952. The donation of this interesting building to the National Trust has allowed it to be saved and maintained for the nation. In that quaint, slightly snobbish English way, the terms of the donation also allows for two generations of the Bedingfeld family to reside in half of the property. Apparently, maintaining the continuity of the family’s presence is . . . . . no, not sure what it is, but that’s the deal.

The well-maintained manor house we see today is mostly a Victorian interpretation of medieval Gothic. The only substantially originally medieval part is the magnificent gatehouse that comprises both the King’s Room and the Queen’s Room, and a noteworthy Priest’s Hole. 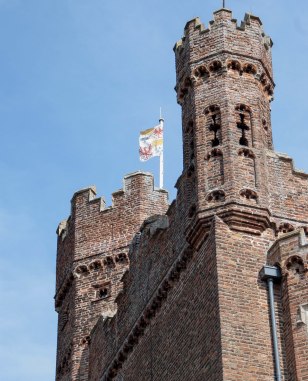 In 1482, with royal permission for crenellations (originally a licence to construct a fortified property), Sir Edmund Bedingfeld oversaw the building of a brick manor house including a crenellated gatehouse. This combination of gatehouse and moat gives Oxburgh Hall an overall impression of a fortified building, but during the late-fifteenth century moats and gatehouses were more about the conspicuous display of wealth and status than defending the family against bombardments.

As with any site that has been occupied by a substantial building for over 500 years there have been many changes, additions and improvements as different architectural ideas, together with the family’s fortunes, waxed and waned over the centuries. As was traditionally the custom for any notable medieval house, Oxburgh Hall once had a Great Hall, but, unfortunately that was pulled down by the 4th Baronet, Sir Richard Bedingfeld, in 1775.

It is difficult to make more than a cursory summary of the broader, social circumstances of the many different lives lived over the centuries at Oxburgh Hall without making a detailed, in depth study of the historical record.  As usual we only get the faintest hint of the many hands that built, maintained, worked and served at Oxburgh Hall. Of the Bedingfeld family we learn more. They remained a Catholic family after the English Reformation and as such fell from royal favour, but 100 years later found themselves back enjoying comfortable times with the Restoration and the arrival of King Charles II to the English throne. 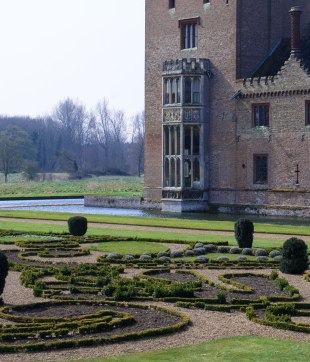 Oddly, the National Trust’s guide to Oxburgh Hall has a somewhat one-sided, almost hagiographic approach when discussing the role of the family as though by simply being born a Bedingfeld one had achieved something of note. Their medieval beginnings featuring the acquisition of land and status is a familiar story of fighting, scheming and beneficial marriage alliances. And, apart from being Royalists during the Civil War, the Bedingfeld’s main claim to fame is that they have remained resolutely Roman Catholic. From the heritage point of view, rather disappointingly, we don’t find any of them were renowned patrons of the arts or great collectors or even sponsors of some of Norfolk’s distinguished artists such as John Crome or John Sell Cotman.

Furthermore the only truly exceptional art works of national interest at Oxburgh Hall – the Oxburgh Hangings – were brought to the hall by Mary Browne of Cowdray Park on her marriage to Sir Richard Bedingfeld in 1761. These captivating Elizabethan needlework pieces consist of many embroidered panels sewn by Mary, Queen of Scots and Bess of Hardwick (full post on the Oxburgh Hangings).

However, if you are interested in experiencing the cool, lofty space of The King’s Room within the gatehouse, or undergoing confinement in a priest’s hole, or simply the pleasure of wandering through a ‘time capsule’ Victorian library, then Oxburgh Hall is worth a visit.