Recently, I have been reading about the traditional Japanese skill of Shibori. You’ve probably seen examples around as it has become very popular.

Shibori is a dyeing method that involves folding and binding plain, undyed cloth and then submerging the knotted cloth in a dye bath (traditionally indigo) to produce a patterned textile. It is a kind of tie dyeing and has been practiced in Asia and Africa for centuries. The process has been fine-tuned into a classic textile skill in Japan. Indeed the word Shibori comes from the verb root ‘shiboru’ which means to wring, squeeze or press.

I thought I’d have a go using a plain white, long, crepe de chine scarf. As it was a long scarf I first folded it four times to create a small square which I then pleated and bound into a sausage. I didn’t use a dye bath, but soaked parts of the sausage with two colours, magenta and a chestnut brown. The dyes were then fixed by a short burst in the microwave instead of the usual two hours in my big steamer. 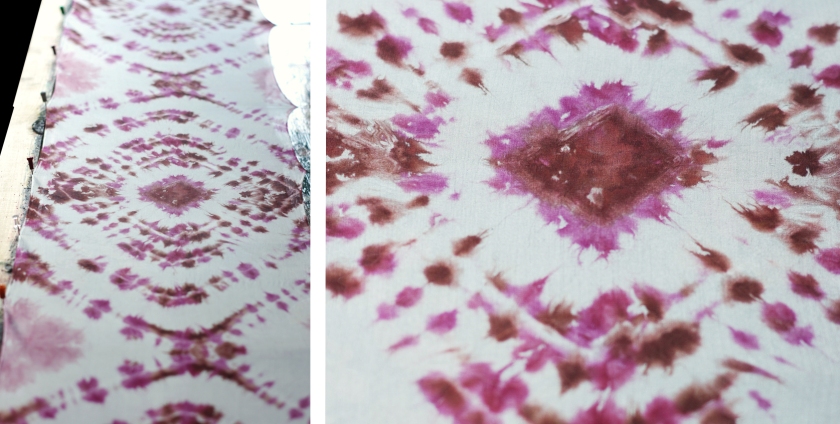 Above is the result after the first microwave fix. I thought there was too much undyed white. It appears I didn’t soak the silk sausage with enough dye. There are some interesting patches of blending, but the whole scarf looks too much like basic tie dye. However, I did think it would make a good background for some overpainting with pale colours. Once I had finished painting the scarf I removed it from the frame, loosely folded it up and microwaved it again.

I found microwaving silk not for the faint-hearted as despite always including a small dish of water, the silk gets very hot indeed and there is a real risk of scorching and even catching on fire! It was a relief to plunge the hot silk into the cold water for a quick rinse.

After the usual washing and pressing here is the finished result. 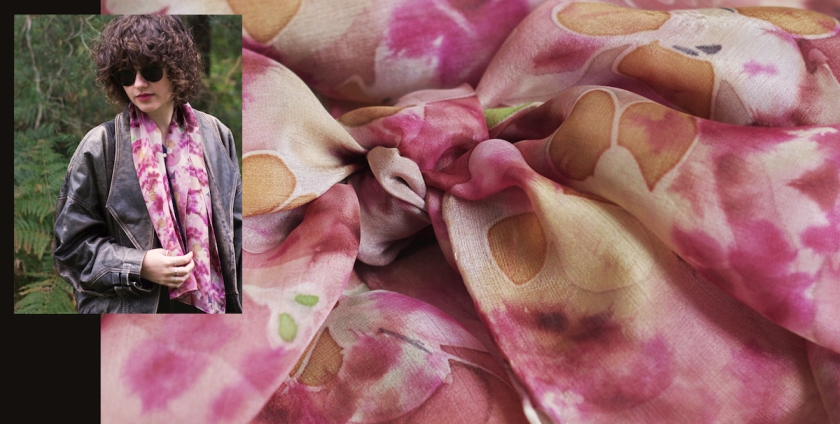 6 thoughts on “An Experiment with the Microwave”