From the spring of this year, the British women’s fashion brand ‘Jigsaw’ has been running an ad campaign with the strapline “For life not landfill”. There has been a media wall running along the walkway at Oxford Circus underground station showing Jigsaw posters in front of an enormous photograph of a landfill mountain.

It is an interesting theme for a contemporary fashion brand to highlight. The snappy slogan, “For life not landfill”, also appears at the top of a series of magazine advertisements showing vintage clothing paired with a new, Jigsaw garment. Naturally, in other parts of the world and in our past the idea that we would consign cloth to landfill would be an outrage. Clothing was worn, restyled, passed down, patched and repaired. Textiles were routinely recycled.

My mother was a great collector of scarves and when she died I inherited some of her ‘heirloom’ pieces which poignantly (but I guess not really surprisingly) included some of my early work. So here is my version of ‘For life not landfill’. Top of this blog post photo shows silk scarf (1993) paired with my vintage navy blue wool and cashmere coat purchased secondhand in 1988. And, below, same crepe de chine silk scarf with contemporary linen shirt and suede skirt finished with a leather belt (1975).

But our best family clothing heirloom is a brick-red, mid-weight wool waistcoat made by my mother in the 1950s. She made this waistcoat and also a skirt from a wool coat. She had originally bought the coat from a shop on Oxford Street, London, when she first started work. She passed on her waistcoat to me when I was a teenager.

I would post a photo of it, but the waistcoat is now with my daughter back in London. However, I’ve still got the original paper pattern which my mother used. So, that’s a coat restyled to a waistcoat and worn by three generations – 1948, 1979 and 2015!

And, finally, a quick reminder whilst we are on the theme of buying quality, so-called heirloom pieces, it is ‘Buy British Day’ this Saturday, October 3rd which coincidentally was my mother’s birthday. 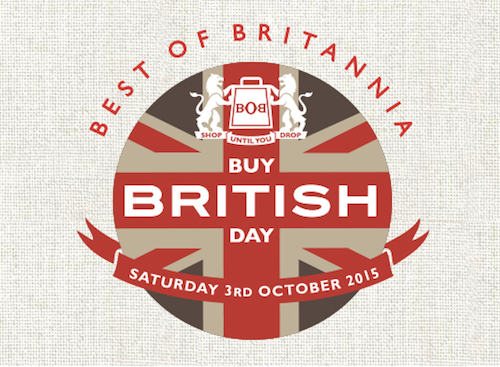 2 thoughts on “Contemporary fashion – heirloom pieces or destined for landfill?”