Delivering his third talk in the Reith Lecture series, Grayson Perry contemplates whether contemporary art still has the power to shock. He delivers his lecture called ‘Nice Rebellion, Welcome In!’ in a lively, entertaining style with no stuffiness, but don’t be fooled he is seriously questioning the importance of sincerity in our postmodern, ironic world. Available to listen to at http://www.bbc.co.uk/programmes/b03f9bg7

Drawing on his own experience Grayson Perry recounts how he found the world of 1980s postmodernism had already been there and done it all. The art world’s relentless quest for the new, innovative, cutting edge idea had used up ‘shock’ and negated its power. Anything could be art and nothing could shock anymore. Grayson suggests even the lifestyle of the artist has been democratised and incorporated into everyday living, all kinds of people are bobos. That is ordinary folk that now have a little bit of bohemian-ness about them. Bobos is short for bourgeois and bohemian (coined by David Brooks in 2000 in his book ‘Bobos in Paradise: The New Upper Class and How They Got There). Grayson mused that, “Since the 1960s everyone’s become a bit of an artist”.

Of his own debut into the world of contemporary art Grayson Perry had wanted to shock and had wanted to announce, “You’re the old people who made rusty metal sculptures we are the new people who are making this sort of work!”, but it had all been done. Talking of rusty metal, Richard Serra springs to mind and particularly for me, as by chance, my sister and I looked around ‘Fulcrum’ a couple of weeks ago. Richard Serra has been disturbing space and us with his enormous rusting steel sculptures since the early 1970s. His site-specific work nowadays may still be called challenging and is sometimes controversial due its sheer size, in this case 55 feet/16.8 metres of rusting steel, but it does not shock. More of Serra’s smaller scale work can be seen at
http://www.saatchigallery.com/aipe/richard_serra.htm 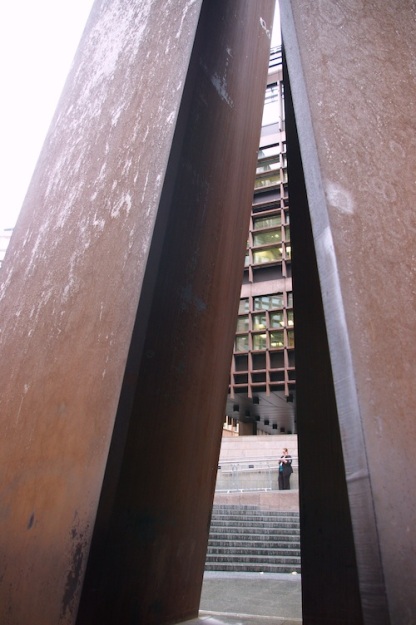 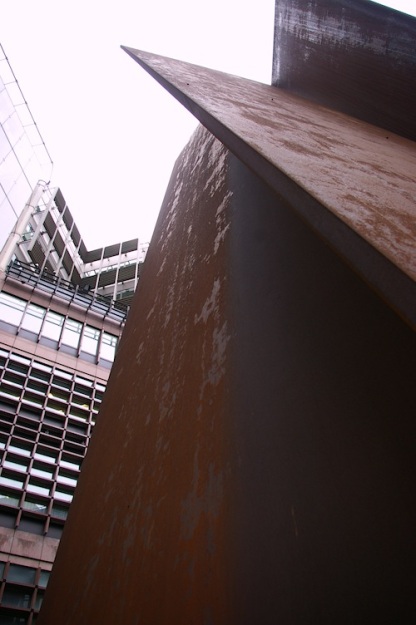 Through the course of the lecture Grayson Perry develops the idea that art is in its end game and although there will always be new work it is only ‘tweaking’ a past idea. And, he suggests that what will separate out the good artist will not be all the postmodern knowing and cynicism attached to their work, but the artist’s sincere intent in its creation. Finally, as a parting shot Grayson commented that a contemporary art work could possibly shock by being beautiful!

Here are a couple of pieces of ageing metal, both functional, one’s a flagpole and one’s a hot water cylinder. Beautiful? Art? 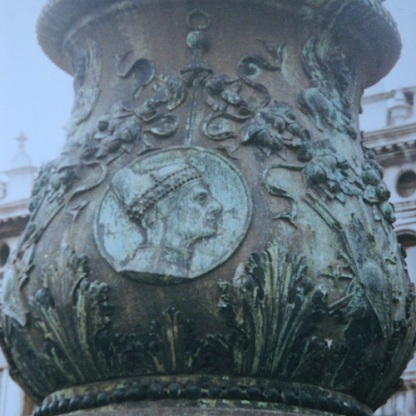 One of the three Leopardi bronze flagpoles in St Mark’s Square, Venice. c.1505 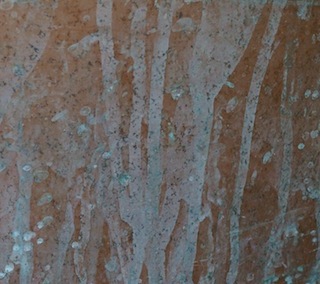 4 thoughts on “Grayson Perry – Can Art Shock the Bobos?”